A new take on the Z-Wave Best Practice Question

Awhile back, I brought up the question about a Z-Wave best practice about whether I should remove or leave in Z-Wave nodes that were only used for the holidays…some said to leave in others suggested removing…

That conversation can be found here:

Question for the brain trust I have 7 PS15EMZ5-1 appliance modules which I use to control holiday (x-mas) lights. They control trees and various other holiday lighting. Once the holiday season is over the modules are unplugged and stored with all of the holiday decorations for the year. At the next holiday season they are unboxed and plugged back in. So the question is…should these devices be excluded from the network when they are packed up or can I leave them in and just know I will see …

I ended up leaving the nodes in the system as other households and professional responsibilities came to bear.

I’ve noticed during the last 6 months or so that my Z-Wave network is having issues…lights don’t come on as they should (rules do fire) and there are delays when devices are manually switched on.

What I find interesting, is that the removed Holiday Nodes still show as online, even through they are sitting in boxes on a shelf in my garage. 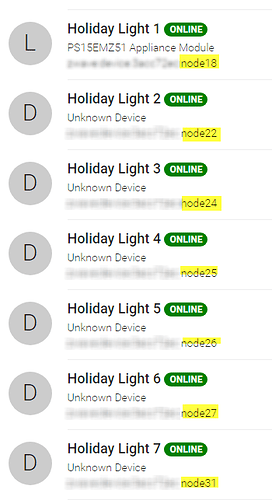 I would venture a guess this is why I am having Z-Wave issues…so I’m guess I should really eliminate these from the network or just leave them plugged in?

But if they are not plugged in…why does OH show them online?

Have you turned off network heal?

Do I understand it correct that you switched off the devices, shelfing them but you left the thing definitions in your system?

If the answer is yes, I understand the issues:
Z-Wave is a mesh network. What you see in HABmin map is the last configuration the controller and the remaining devices know in terms of which node “sees” surrounding nodes. That is used to forward messages from nodes the controller does not see directly and vica versa.
Now that you’ve taken some nodes out of the mesh, the information about the whole net is no longer accurate and some messages might not be delivered via the best connection, thus too late and maybe never be delivered if timeouts do happen.

A network heal can take care of the network information and will update the neighbors information the controller and the remaining devices have, improving your network stability. There is a setting in the controller where you can decide when it will happen or you can switch it off entirely. You may want to check this setting. A network heal is needed when the network structure is changed by adding, removing or relocating devices.
A network heal produces a lot of traffic, it is best done when there is not much traffic expected otherwise.

About your reason to physically remove the devices: I guess, basically you need to decide between the hassle with the network consequences the (temporary) removal will cause versus the energy that the devices will consume when left in place.

Letting the devices sit on the shelf can cause routing issued if left on the network.

Much like zombie nodes, other devices can try to route through the unresponsive nodes.

But if they are not plugged in…why does OH show them online?

“Online” means they were fully configured. They stay fully configured even when they do not respond when switched off. The term “online” is misleading here, it does not imply the controller can still communicate with the devices.

The term “online” is misleading here, it does not imply the controller can still communicate with the devices.

I think this is an incorrect statement

Am I correct that having them offline can affect Z-Wave routing much like zombie nodes?

Good to know. And I learn new facts

My assumption stems from my own experience for a long time now, having seen the same situation here in my installation with old heating valves that were not properly excluded due to failed hardware.

A network heal can take care of the network information

I thought heals take place daily around 2am? I thought that was a default setting, correct? I have not disabled it. The nodes have been on the shelf for almost 10 months…one would think the heal should have corrected things by now.

Thanks for clearing that up @chris, I could not imagine that the ZWAVE things would act differently from all others. If you say this is a bug, is this something I should post as a GitHub issue?

I would like to say that it doesn’t matter, but I could be wrong! I know people have had problems with zombie nodes causing routing, but I’m not sure if the problem is “real” or not. Certainly, if you unplug a device, it will cause problems in the network immediately. Now, depending on what type of devices you have (ie how old - are they ZWave+) it (in theory!!!) ought to recover itself as there are automatic systems to search out the routes if commands fail.

If a number of devices in the network are a few years old though, this may not work well, and the network would require a heal to restore the routes - assuming all the heal commands go through ok it should restore the mesh to its former glory (and again assuming that there are still enough powered devices to form a good mesh).

However, that’s what I think should happen - what really happens is something that I can’t be sure about as it’s mostly not within the control of the binding.

If you say this is a bug, is this something I should post as a GitHub issue?

There is one open already - I’ve just not had the chance to look at it unfortunately.

I'm opening a new issue because I cannot reopen the old issue #1024 Unfortunately the last merged pull request #1035 did not...

I thought heals take place daily around 2am? I thought that was a default setting, correct?

So I have checked…and my heal time is set to 2am.

So why would the nodes still be on the map after 9+ months of daily healing?

Are you on the latest version of the binding? There was an older version where the heal wasn’t working correctly.

To add my own experience to the previous question (delete or don’t delete), I’ve always had bad experiences if I don’t remove old nodes. This is on a fairly robust network with 30+ zwave devices ranging from very old (6 years +) to pretty new (several months old). At least for OH zwave, I’ve noticed severe degradation by leaving in zombie nodes.