Hello, I’m doing my first tests in this world. I have my openhab up and running in a Windows. I flashed a C2531 Zigbee coordinator and added it as a thing in to my openhab. It’s online and working.

Now I’m trying to add a bulb with no luck. I even reset the bulb switching it on 6 times but it can’t be found by openhab.

Any suggestions for a noob?

Trying this through PaperUI. If I try to do it manually I do not find any “tradfri” thing to add. Just hue motion, xiami, etc…

What firmware have flashed onto your TI2531? Is it the “LinkKeyJoin”-firmware? If not please try:

Try the firmware named CC2531ZNP-Pro-Secure_LinkKeyJoin.hex from zstack, with that file loaded on the stick i have been able to control them with zigbee4java. I have tried pro, and pro-secure with zigbee4java and with them i am not able to join Ikea trådfri there. //Mattias

My TI was working well with all my Tradfri’s as well as Philips, Osram, Bitron using that firmware.

I used CC2531ZNP-Pro-Secure_Standard. I just followed the Zigbee addon guideline. I’ll try with that firmware.

I had similar issues back in 2017 with the Tradfri, which have been solved by this firmware.

Yes, that worked. Thanks again for sharing this @elevation ! As you said, the other lamps can join as well. Well - I had to rediscover them

So I currently have the Ikea, Osram and Philips in the same PAN. All can be controlled for level and switch cluster, the RGBs (HUE and the Osram stripe) can also controlled by the color cluster commands. Now looking forward to @chris’s color temp channel implementation

Meanwhile I moved away from TI2531. I’m now on an Ember based coordinator according to Chris’ recommendation. When you start from scratch right now with the Zigbee binding it’s probably worth considering a more future-proof stick.

No luck. I just changed the firmware with the one you said. Still can’t find the bulb…

Maybe I’m missing something? Coordinator on PaperUI shows online. Maybe something about the PAN ID and all that?

Shouldn’t be there the ikea bulbs as supported things? 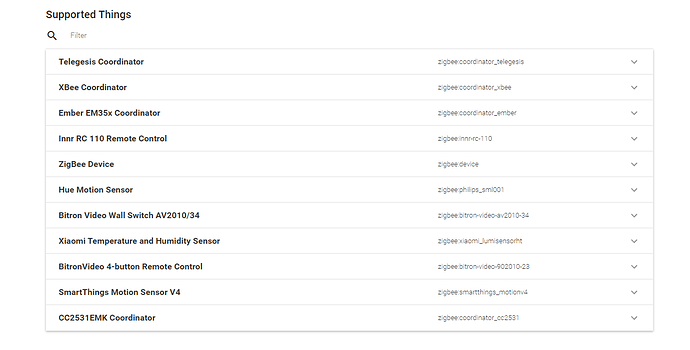 Finally, I forgot to reset the bulb with the new firmware you advised. Now zigbee binding found it!

Hi, same issue there…
Where i can find “LinkKeyJoin”-firmware?
Google didn’t helped me…