Adding new Items from existing equipment in the model?

So I missed the “Advanced” checkbox when adding a Chromecast, and now I want to see app changes etc. But if I go to the model it doesn’t seem like there is any way to go back to to editing that equipment in the model to see a list of the currently configured items and add/remove to it.

Is that planned in the UI or a feature request I can make somewhere (github?)?

Being able to edit the equipment in the model and see the a version of the view below, but to edit channels/model (rather than add, allow me to update the model) would be fantastic. 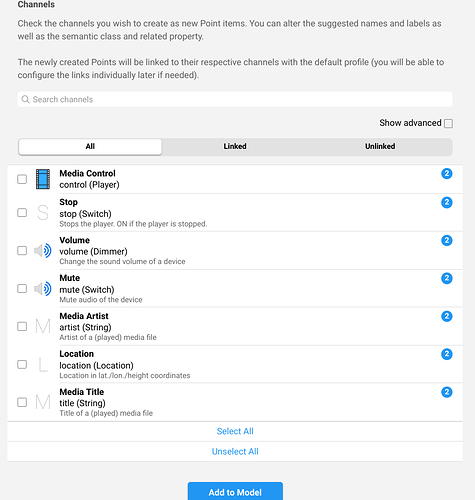 The model is built using tags and Group membership. You can completely build up the model from the Items themselves if desired. So you can go in manually to change the tags if needed.

Create a new equipment using the exact same name, and pick the new channels you want

Items must have a unique name. Because equipment is represented by a Group Item, they too must have unique names. So I think your choices are to manually add the Items linked to the Channels that are missing and add those Items to the existing parent Group (as described in the post you lined to in 3) that represents the equipment, or delete all the Items and recreate them all from the Model menu.

To create a feature request to change how this works you should file an issue at the openhab-webui repo. See How to file an Issue for details.

Your use case was exactly why I added these two separate but related features:

The first will insert a structure with a Group item (the equipment) and the Points (items linked to channels) as members of that group. You specify as the parent the Location or Equipment under which that structure should be inserted.

The second simply adds more Points to the parent group that you specify; so if you initially selected a bunch of channels and now need more, you use that function and specify the parent Equipment or Location directly - it will only create items with that group as the direct parent.

I appreciate the two options. There is however a huge difference in discoverability of Points between the two. The first one has a great UI (which I posted in my first post) allowing people to discover all the channels, select them, etc. The second one requires you to know what you’re doing, create the point with the right type and semantic class, and then figure out linking a channel to it etc. That’s an immense gap between the two.

It would also encourage people to start small and add things as they need them. Right now I add everything out of fear of needing something later to add manually add Point and that means a lot of clutter when picking items in rules etc.

I think you are right. I have/had the same problems. Additionally I think the possibility to change easily the hierarchy of the Model inside the Model tree without to care about the group structure in the background make the progress of building your Model easier and faster.