Hi,
After being unsuccessful in making ZW100 reporting more then once per hour on battery (there is a separate topic about it, it ignores any settings about reporting and does what it wants)

There are of course many sensors intended for industrial or agricultural use outdoors, but those won’t be using ‘domestic’ zwave technology.

I decided to connect it to usb power, as many people report its a very good sensor when running off usb power.
And indeed, it works much better like that.
But as I am using it as an outdoor sensor, there is no power outside where its located. so I hook it up to usb power bank. I am shocked by the power draw of this thing, it burns 5000mah battery in few days, I was expecting it to run few months…
any advice?

I think i will get a small solar panel for it

A 5Ah battery should last much longer in my opinion.
I think the problem is possibly the voltage?
The AW100 accepts input 4.5 to 5.5V if on mains power, so I guess the voltage drops at first?

but powerbank should be able to give 5 volt…
here’s what google says:
The industry standard cell(s) used within the Power Bank commonly output 3.7 Volts . This voltage has to be boosted up to 5 Volts via the Power Bank’s internal circuitry as this is the standard voltage of a USB interface. Energy losses during this boosting phase are around 10-15%.

btw there is another challenge in this approach:
most modern power banks have auto cutoff feature. Meaning, when there is no power draw, they shut off. and this sensor draws so small amount of power, that powerbank shuts itself off.

Temporary I connected additional led diode to the powerbank as fake load to keep it alive, but this red led probably draws 20mA.
when I have time i will run all this on the power meter for few hours to see the actual draw of the sensor.
Also I’m planning to get the power button of the powerbank hotglued/stuck/fixed - so it never shuts off, and drop the fake load.
I have another old power bank, some small 10yr old nokia 2000mah without autocutoff feature, but it lasts only few days on it as well. I guess the battery is bad due to age…

You are of course right, power banks working with 3,7V.
I am seemingly too old as I am still on the old cells which had about 1,2V each, so 4,8V fully loaded.

I read the ZW100 consumes 200mA during transmission but this should be for a very short time only.
However, please keep us updated, I am thinking to also place a ZW100 outside

sure, will do.
meanwhile, i leave you with photos of this shitty setup

batteries are sticked to the wall using some magnet stickers and metal stickers off amazon (for easy removal, recharge, and reinstall) 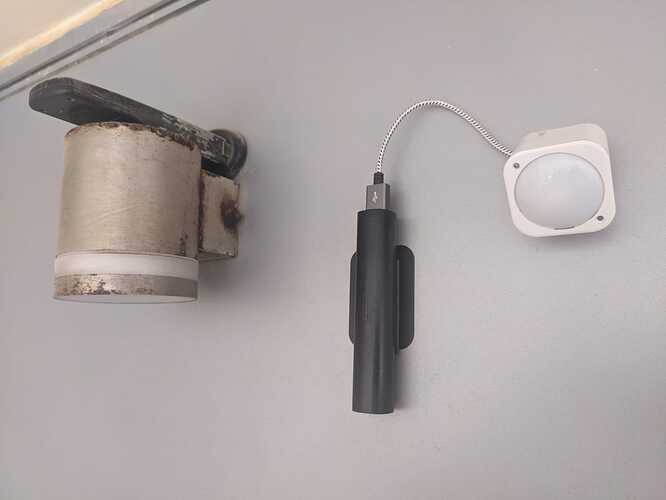 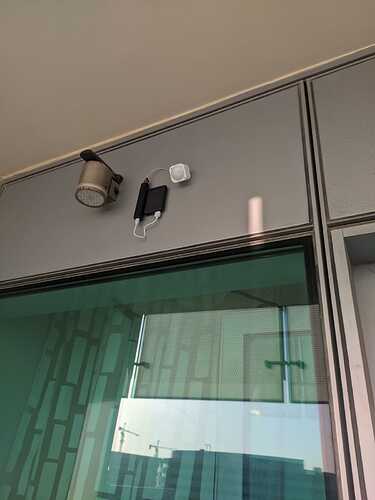