Hello, I’m just startet with openHab. I followed this Tutorial to connect my MiLights to my Alexa via hue emulation.

The MiLight extention for openHab works fine, I’m able to fully control them via ControlPanel: 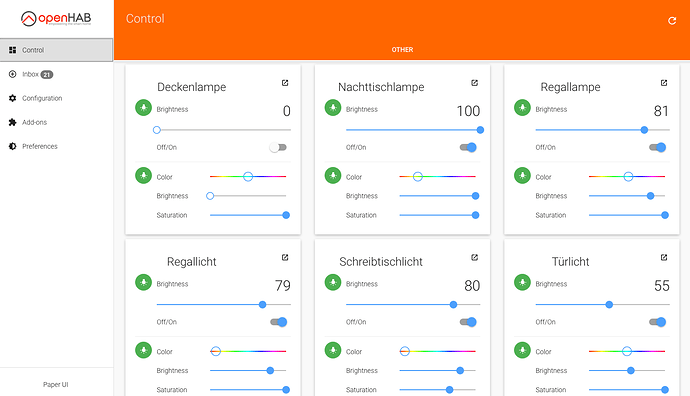 I also added this .items file in openHAB-conf/items/alexa.items with the following content:

And of cource I set the pairingEnabled to true in HueEmulation configuration and it should be working, because when open http://192.168.2.122:8080/rest/services/org.openhab.hueemulation/config I get

I already tried different .items configurations with Switch [“Switchable”] without channel, different names. Alexa never find anything.
I also tried to connect my Philips TV with the hue emulation, but it can’t find them too

Its so fustrating to can’t solve that last step.

@kuemme01
Which type of echo are you using?

I had similar problems with a new 2017 echo. I had tested it because I wanted to use it to replace my older echo dot.
Despite of my echo dot, the new echo was not able to find my openhab items via Hue Emulation.
Maybe they removed the hue functionality in the standard 2017 echo.

Thanks for your reply. Its the new one with that fabric around. I have an echo dot in my car, if I bring it back to the apartment and let it search for the lamps, are the lamps in my account and new echo can see them too?

I will test that.

Maybe they removed the hue functionality in the standard 2017 echo.

I have an original Hue Bridge in my network too, that can be found by the new echo.

The Alexa openhab skill works fine, but you have to rely on myopenhab as cloudservice then.

Yes, I don’t really want to use that.