Is anyone doing anything with something like iViewer, iRule etc to create more elaborate UI’s for controlling openhab?

I’m looking for any experience people have had with linking into the REST interface to control OpenHAB and receive updates. Some of these “universal remote” type apps look very slick and could be a good “skin” over openHAB…

What is everyone else using for remotes/interfaces?

I’ve done a little bit with Tasker to interact with openHAB using the REST API. It seems to work pretty well. My only complaint is there is very little feedback when something goes wrong.

For the most part though I’ve IFTTT set up with button widgets on my home screen for really common operations and I use HABDroid for the rest.

Eventually I want to get a cheap tablet or touchscreen for a RasPi to use as a wall mounted controller. When I do that I’ll probably want something better. I’m interested to see what other responses you get.

rlkoshak I had posted this on the old forum too and surprisingly didn’t get any responses. I am getting the feeling that everyone is using the default UI’s and that kind of surprises me. I would expect some pretty elaborate interfaces

As soon as my sensors are set up as fully as I like them, my next stop will be physical switches and buttons all over house. I hope that my set of Flic buttons will be acceptable to friends and family… 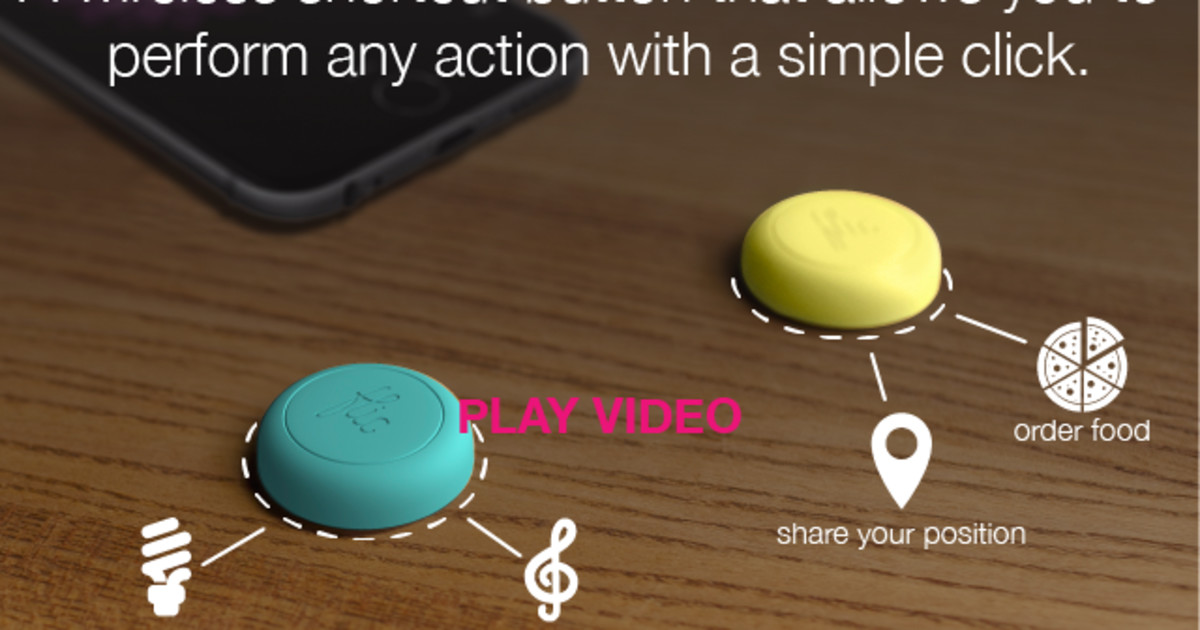 The wireless button that creates a shortcut to your favorite actions on your phone. | Check out 'Flic: The Wireless Smart Button' on Indiegogo.

Unfortunately, the 80/20 rule applies here as well, I had 80 percent of the desired sensors / actuators set up in the very beginning, now I “just” need to finish the rest

Here are some of the ones I have come across

I will post any others i find. I know these aren’t really UI’s but they are interfaces in a sense

I suppose it depends on your goals and how you want to use it. My home automation philosophy is that it should just work and if I have to resort to interact with a GUI it is a use case failure. I want as little GUI as possible and it should either just do its thing most of the time and only require use of a GUI in rare cases. This is largely why I’ve limited my lighting automation to just two lamps and one fixture. The rest are easier and better controlled manually.

From my wife’s perspective, the user interface is the IFTTT button app which has three buttons, one for each garage door opener and one for the lights. She has an iPhone so I can’t just put them on her desktop nor is something like Tasker available to further automate the interactions. From my perspective, I have IFTTT Do button widgets on my phone’s home screen and anything I need to know about (e.g. door has been opened but no one is home) I get via notifications. Even for the garage door I have a menu that pops up when I get close to the house asking if I want to open the garage. If I need fine grained control (e.g. turn on one lamp but not all lamps) I use Tasker with AutoVoice or the default app. It is only when need to troubleshoot a problem or I want to look at some charts that I look at the sitemap in the default app.

However, if I get to the point where I have an installed touchscreen controller, I will probably move to something better for a UI than the defaults currently available.

For HABmin2 (which is really for OH2), I am working on a dashboard style layout as well as the current Sitemap layout. This allows widgets to be placed in a grid as the user likes - currently I only have a few options for widgets (and not play buttons as mentioned at the start of this post), but this will be expanded as I get some time. Currently I support charts, gauges and a floorplan option in a drag and drop editor…

It’s still very much work in progress (and is targetted for OH2, which is definitely still WIP!). There was also talk of other people designing UIs on the google list a few months back, so I’m hopeful that there will be a few good interfaces to emerge in the near future

Chris I love the floor plan layout. I am working on getting a small touchscreen in each room and having layouts like that would be nice. I think thats what originally attracted me to openremote was this video

That UI lets you take photos of your room with appliances/lights turned on and off and then cut up the photos. I liked that idea. and makes it very intuitive for someone that doesn’t know the system. “just touch the light you want on or off”

There is this github project: OpenHAB-Controlpanel

Tried it out, it works using the REST API, but seems to be optimized for a wall-mounted tablet.

Based on the weather binding, I have created a ui that is displaying most important information on my tablet mounted at the wall. The benefit of this approach is, that I have full control on the layout, do not have to install any additional “overhead” like PHP and additional server.
For me, it would be an urgent requirement, that openhab 2 would again support a html server. 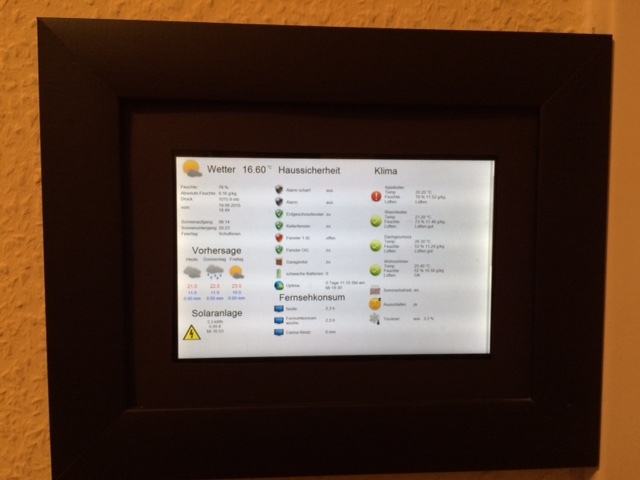 it would be an urgent requirement, that openhab 2 would again support a html server.

OH2 does include a web server - it’s just not (currently) served out of the webapps folder like on OH1. Currently it needs to be packaged into a JAR, but the JAR is very small and mostly just contains the HTML/JS/etc files…

The advantage of this approach is -:

I know this probably isn’t what everyone wants, and I think the webapps folder should also be supported, but the current approach is actually quite nice and convenient.

I started to look at Zebra.js for the UI but havn’t got anywhere with it yet. I also like the look of the Honeywell Evo (http://www.barryframpton.co.uk/wp/wp-content/uploads/2014/02/Evohome-1.png)

I think that could also be adapted for lights with pictures of bulbs and dim levels.

If you just want a simple dashboard type of UI, you could look into using dashing (http://dashing.io/), which gives you a ready framework to start from. A user over at the SmartThings forum put together a nice dashboard running on a Nexus 7 tablet - https://community.smartthings.com/t/home-automation-dashboard/4926.

Starting with his Github code (https://github.com/FlorianZ/hadashboard) and just substituting for openHAB instead of SmartThings, I have a similar dashboard running off my openHAB server communicating via REST etc. 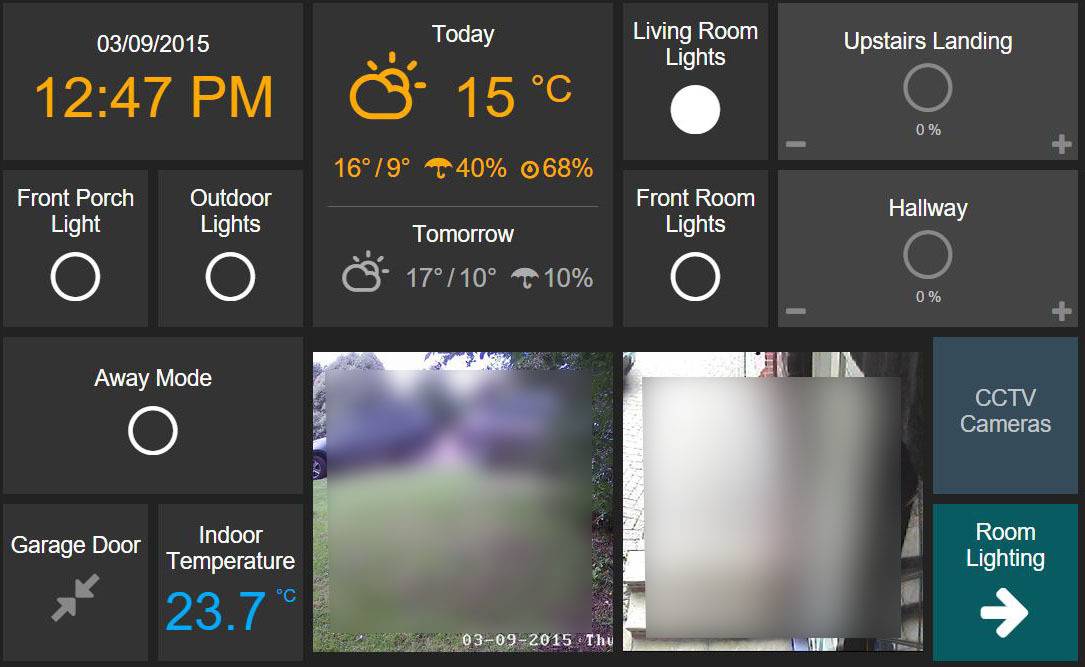 It’s based on Tomcat, so it can run alongside OpenHAB provided you modify the ports. I did that for a while, but now run OpenRemote as a Docker image on my unRAID server.

Downside is that it is a LOT of work to setup/design and it doesn’t support scaling of 1 design across multiple platforms. You have to design from scratch a new interface for each device and each orientation.

@smar - That interface looks great. Would you mind sharing your setup?

It can/will save me, and anyone else interested, a great deal of time.

On a another note, perhaps this forum should open another (sticky?) thread for people to share how their respective dashboard/GUI interface for OH/OH2.

Sure. Give me a few days and I’ll put together some basic instructions.

EDIT: I managed to get it documented/uploaded to github. Link is on a new thread - Dashboard UI suitable for tablets

Also I’m interested in how you mount and power a tablet in the wall?

Neil, my pipe dream is to get a nexus 7 which has inductive charging… Then have a small plate of some sort on the wall with the charging component in it. Magnets built into the plate and also to the back of the tablet so the nexus 7 tablet just sticks to the wall, the magnets would help it align correctly to charge.

Nick, do you have any video posted showing how your interface works?

Hakan, that flic button looks super cool! Only downside for me would be that it has to “talk” through a phone to control stuff… Would be great if it could talk directly to openhab without needing a phone…

Sorry Tommy I don’t, the OpenRemote side of things is very ‘practical’ at the moment, trying to find decent icons that work on all the designs is challenging.