I have both Aquara Wall Switch and Aquara Wireless Switch, but only the Wall version dosen’t work with the following rule: 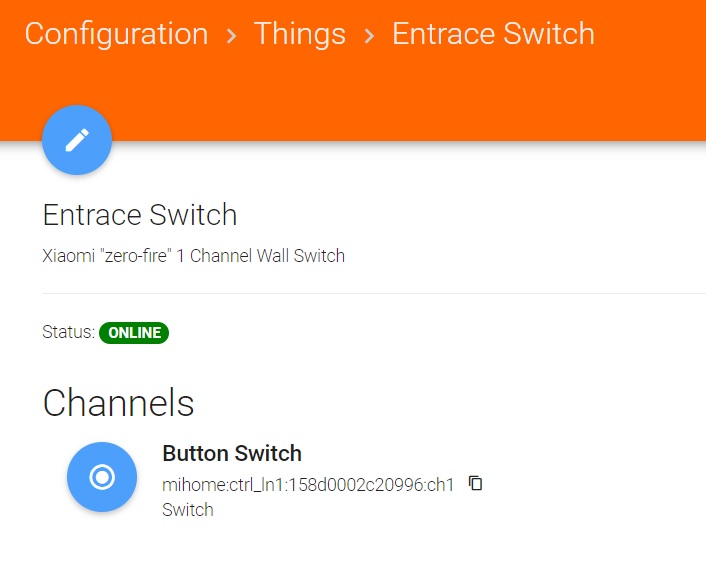 Even the SHORT_PRESSED command doesn’t work. I also tried to change the switch into the “wireless” one in the Xiaomi app, but still no triggers from the channel. Only state change can be recognised with the Wall_Switch item.

Am I doing something wrong, or this device just doesn’t support button press events?

These rules are for Aquara Wireless Switches, not Wall Switches.

Having only the HORT_PRESSED would be good enough to me. I don’t mind double and long.

The whole problem is, that when I have smart bulb connected to the wall switch, then pressing the switch actually turns the power off for the bulb, so I have to turn it back on. Then it needs some time to boot and after that I can change color or whatever. In generall it works crappy. Getting switch pressed event instead of change of the relay state would be far better.

I tried out your suggestion.

I noticed the following difference between Wall Switch and Wireless Switch: 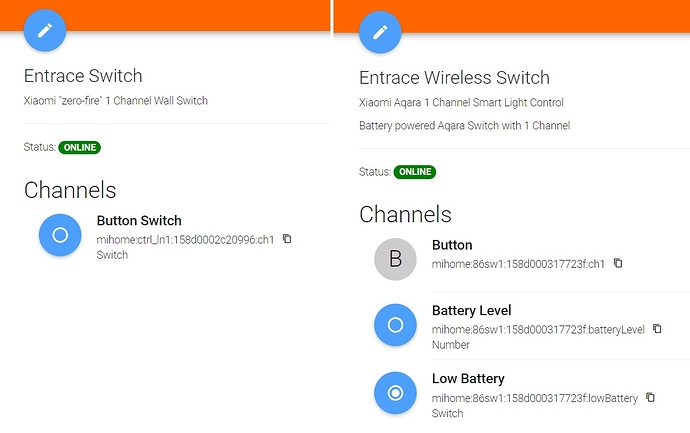 The Button channel in the Wireless Switch is greyed out, while Wall Switch has a blue Switch channel.

The Button channel in the Wireless Switch is greyed out, while Wall Switch has a blue Switch channel.

Above, I gave you a working code. How does it not suit you?

Yes, you’re right, and this is what I’m actually using now, but I wanted to improve it, as it doesn’t work well.

I have a Yeelight Smart Bulb connected to this Aquara Wall Switch, so I want the Wall_Switch to be turned ON all the time and have my Wall swtich controll the Bulb power directly, without changing the state of the relay. It can be only achieved by press events, such as SHORT_PRESSED trigger, without any crappy behaviour.

I red on some other topics, that someone managed to have this SHORT_PRESSED trigger from Wall Switch, but I cannot get it working.

It can be only achieved by press events

in the MiHome application, you can change the behavior of the switch to logical, i.e. disconnect the relay. Have you tried this? I have not tried it myself, I don’t know if it works or not.

I am using this function right now. Nothing change in both cases.

The Wireless Switch gives the following log once I press it:

, but the Wall Switch doesn’t.

I’m pretty shure it should, at least when this logic function is active. Maybe the Binding is bugged?

but the Wall Switch doesn’t.

I tried, translated into a logical in the application mihome and I also have no reaction, sorry, but I have no more options.

Maybe the Binding is bugged?

I’m sorry.
If you find a solution, please share it here.

Ok then. At least I have my answer. Thanks for help anyway.

I decided to replace the Wall Switch to a Wireless Switch, so now it works as I wanted. This is a big disadvantage of Wall Switch to home automation lovers.

This is a big disadvantage of Wall Switch

Perhaps this is not a switch problem, maybe it is not implemented in a binding. It would be nice if those who use zigbee2mqtt were told whether this works for them or not.