Can I change the logo in openHAB main page?

Hello. I have a question of customizing the main page.

I want to change the openHAB logo(as shown in the figure below) to my own one.

so is it possible? 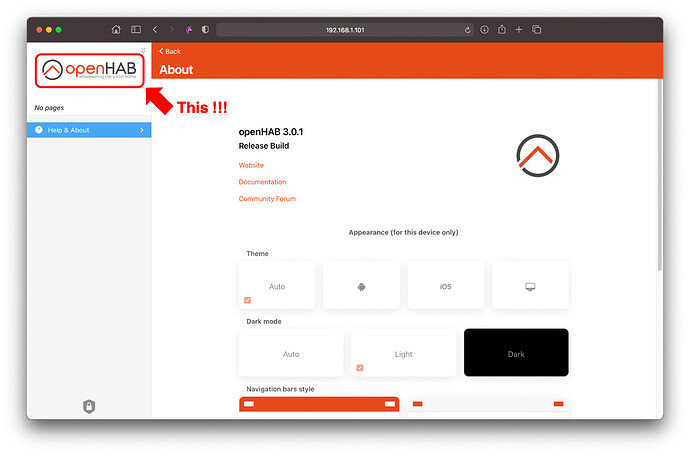 Simple answer, no.
Why do you want to change it ?

so is it possible?

I am sure it is possible of you fork OH and compile it yourself but there is no need for them to provide that functionality. The ESL license does not permit you to take OH and claim it as your own work.

I find myself wondering the same thing (can it be done, or as importantly can it be done easily). I think the why is pretty straightforward: customization. The folks using OH are DIYers and tinkerers, so it shouldn’t be surprising that they would want to make the UI their own. That there are a handful of questions on this forum that keep peetering out with someone asking “BUT WHY?” is evidence enough of this. Producing a custom build seems like quite a length to go for for so simple a personalization.

The folks using OH are DIYers and tinkerers, so it shouldn’t be surprising that they would want to make the UI their own.

openHAB owns the Ui, code & licensing. It shouldn’t be surprising they only use their own logo.

I wonder if there is some sort of misunderstanding here. I don’t think users are interested in taking an openHAB instance, stripping it of all openHAB branding and pretending that it’s their work. Rather, they are trying to customize parts of the UI simply for personalization. This is consistent with how many other such systems work. Take for example something like Discourse (which I think we are all using right now). I was going to go with a phpBB example, since I’ve deployed/customized those in the past, but we are using a good example right now. You are allowed to put the openHAB logo in the upper left, instead of having to leave the stock Discourse logo there, but nobody is imagining that maintainers wrote Discourse themselves.

As for ownership, the code (including the code that enables the UI) is “owned” by the contributors in a sense. Someone may even hold a trademark on the logo, which would mean that I can’t go off and fork the code and ship it with their logo. But by the time that one has installed openHAB somewhere and started slapping together their system, its hard to claim that the contributors “own” the resulting configured system.

That ease of customizing the displayed logo on an openHAB instance is not a high-priority feature for the developers is perfectly fine. I get it. It would take effort to do it, and perhaps not many folks are interested. If no one moves on this simply out of apathy, I wouldn’t be offended in any way. But to claim that there is some sort of “ownership” argument for not doing it would be pretty user-hostile for an OSS project.

I wonder if there is some sort of misunderstanding here.

Oh, probably. Suffice to say that the openHAB Foundation owns the logo and copyright, and the foundation is registered in Germany.

The way I see it, the OH3 UI is the one place where the openHAB logo is featured, and a user only sees it regularly on a desktop web browser (where it can be unpinned). On a mobile device, it’s hidden by default. So, I think there’s a reasonable balance that’s been struck.

It would take effort to do it, and perhaps not many folks are interested.

I’ve been roaming around here for awhile and don’t recall anyone asking. Given that OH3 is brand new, I suspect any older questions would have been about the PaperUI interface, as that’s the only thing I remember having a logo in OH2. However, it wouldn’t have been a major concern since PaperUI was was generally only used for some installation and configuration tasks (and was actually never finished). For daily use, the recommendation was for people to use sitemaps and HabPanels, which are completely unbranded.

If it bothers you so much, you can set the menu to auto hide, use your own logo on the ui page and navigate from there.

Or just use habpanel which doesn’t feature a logo either.

but seriously, I just have the menu set to auto hide for the “control” clients, to save some screen space. for my “admin” clients it doesn’t bother me, it’s pretty un-intrusive.

I want to change the openHAB logo(as shown in the figure below) to my own one.
so is it possible?

have a look at greasemonkey, tampermonkey or userscripts which can be used to ‘modify’ the appearance of a webpage during loading time in the browser. This is achieved by injecting javascripts.