This is an example from HABmin showing additional configuration for ‘Date Time Format’.

This is my channel in .items file without the additional configuration.

I see kind of same problem is described here in this post: Zwave 2 Binding - textual channel config. Any solution @pa1?

so how do I do this in the .items file?

Does the example of the official docs not work?

Yes the example from official docs work for the first channel but the NTP has another channel with the ending :string, see attached picture of both channels from HABmin. The first is type datetime and the second one is type string and I guess it is possible to add the Date Time Format for the string as a parameter in .items file. 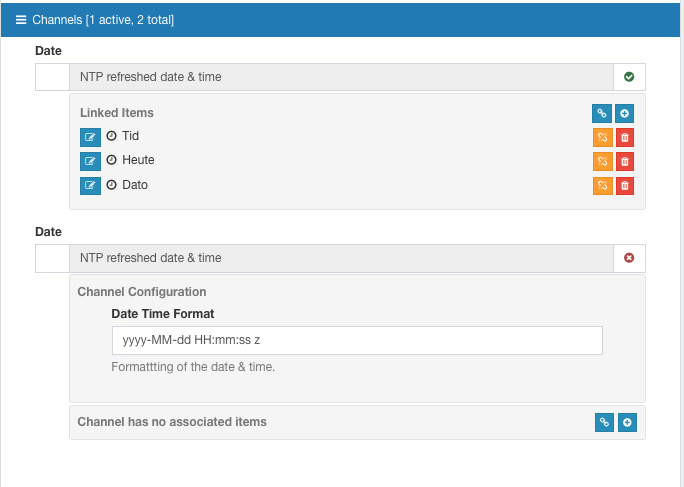 Another example of a channel with additional configuration parameters is from one of my Z-wave devices where it is possible to invert the feedback position and control direction in HABmin but I do not know how to do this in textual configuration in .items file. 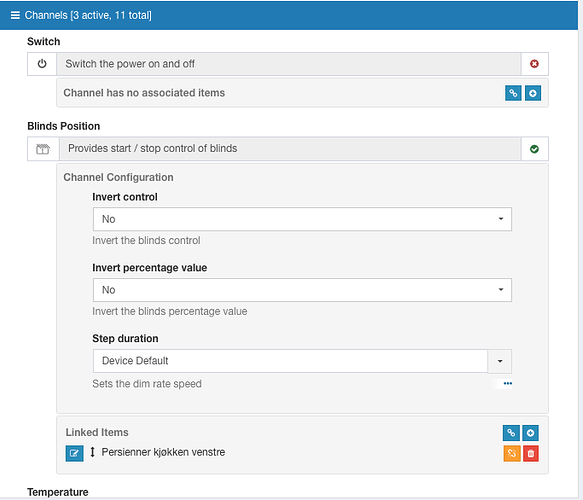 but I do not know how to do this in textual configuration in .items file.

Textual config is only possible with the zwave testing binding:

The latest version of the test binding dated 25th February 2018 is here. Toward the end of last year I spent some time doing some initial refactoring of the ZWave binding in OH2. This focussed on rewriting the way transactions work as this is an enabler for other areas of the code. At the same time I also restructured the different layers of the binding to make things cleaner, and done some changes to support a system of autocoding the command classes directly from the Z-Wave standard which sh…

But I haven’t found any example for that either …

but I do not know how to do this in textual configuration in .items file.

Textual config is only possible with the zwave testing binding:

Not quite. Textual config of items is possible as it’s nothing at all to do with the binding. Text configuration of things can only be done in the development binding.

Textual config of items is possible as it’s nothing at all to do with the binding.

Almost: I have never found any hint how to add “invert control” or “invert percentage value” to my rollershutters items definition …

These are set through configuration parameters - I guess it’s the same as any other parameter configuration for any other binding as it’s definitely not read by zwave. You’d need to look in the source of the _channels.xml file to see what the naming is for the parameters.

You’d need to look in the source of the _channels.xml file to see what the naming is for the parameters.

I found an easier solution: I just use HABmin and do a GUI configuration, that is working fine for me …

@sihui: By GUI I guess you mean Paper UI?

I have added things using HABmin and setting the invert control did not work in HABmin. Now I also tried doing this in Paper UI and there it worked. Seems like a bug in HABmin.

@chris, did I understand you correct that channel configuration only can be done in HABmin / Paper UI or do you have any example on how to do this in text-file?

By GUI I guess you mean Paper UI?

As far as I know both rely on the same API/REST interface, so there should be no difference … AND it is working fine for my setup. 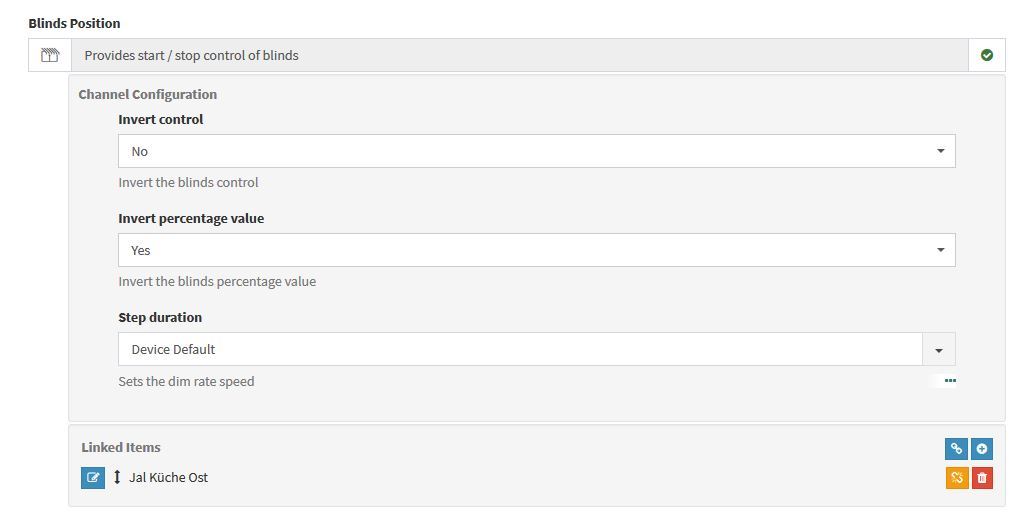 It can be done in text files as well, but I don’t have an example of how to do it as I always use the UI. The format for items is the same for all bindings though so I would look in the OH docs as it should be described there.

If you’re after specific configuration for certain channels (and really there is very little) then you can check the channels definition file -: