I think it largely depends on the implementation.

If you create an IO add-on it would work like:

No Rules are required.

If you create a regular binding it would work like:

I definitely see advantages and disadvantages to both approaches. But the IO binding approach fits in more closely with OP’s original use case of messages like: <ItemName> <New State>. It also requires less work on the user’s part as the format of the messages is predefined and no Rules are required.

In short, it could be implemented as either an IO add-on or as a traditional binding, but I think an IO add-on would be a better choice.

wow, what did I do here

I would prefer an “In Openhab” solution. No need to make the OpenHAB Homegear etc. things more complex. (in my case)

@rlkoshak I think I would prefer IO Solution too. Would make it possible to control Items just by knowing their Names.

But I think this is a bit too much to start with, for me.

Hey @gruenwaldt,
after all that was said I actually think that a binding with the options stated by @job and with the help of the library mentioned by @gitMiguel would be pretty cool and relatively easy to implement. You should reconsider!

With the IO approach, though it will be more work to implement up front, it will be less work for the users and both the use case of commanding individual Items by name as well as job’s use case would be supported (i.e. you can send any text/XML/JSON to a String Item by name and use a Rule to parse it out).

With the binding approach, the user must create a Rule to parse out the messages and/or the binding will have to support matching and transformations like MQTT 1.x does, at which point is it really easier to implement?

I don’t use Telegram and don’t have time to code something up so I don’t have a dog in this fight. My opinion is worth nill, but I present it non-the-less.

I am quite interested in such a solution, but as i said, i would prefer the binding solution. I can see the benefits of the io solution, but i don’t see myself controlling single items via text messages.

I would create a handful of commands which start/stop larger processes.

Is it neccessary to decide one or the other? Isn’t it possible to use a single codebase for the io and the binding approach?

I am currently time limited, but hopefully next month i can try to develop something. Could be fun doing some java again.
Off course, i would start with the binding approach, but the logic behind the io approach isn’t that complex. Parse the item name from the message, get or set the item value, send a reply.

Not to derail the conversation, but as a quick update I am able to control turning on a light above my kitchen sink (as an added bonus my wife in the same group chat can use the same keyword and it also runs the script).

Within in the action.lua I have the following:

And for the kitchen_sink.sh it has the following:

What I also had the most trouble with is that this does not appear to work on a Channel in telegram vs a chat with yourself or a group chat.
I also believe that with the action.lua file you can also limit who can issue what commands by only allowing them to come from you or some other ID; I’m thinking of things like smart locks you don’t want to let kids have the ability to unlock the house for their friends, so limit it to your own ID.

I’m going to be adding some more if conditions into my action file and see how well it works for me.

Currently yes, but no new tags should be invented and thus the possibilites are pretty limited right now.
The suggested solution to this problem for IO add-ons is a new meta-data service that still needs to be implemented.

perhaps another string item/channel like e.g. ‘new message to send’ (with additional metadata as well). With that you can easily write a rule which answers any command.

A binding seems to be a bad choice for that. This is imho rather the normal use case for a rule action - just like you would send tweets, mails, etc.

):
You could also think of implementing Telegram as a “Console” through which all the smarthome console commands are made available. I actually did that back in 2010 through XMPP (using iChat and Jabber as clients).

There is XMPP console functionality which perfectly allows to control OH (lookup for items, get status, update and command):

you can use node-red with openhab and telegram nodes to control openhab by telegram.
for openhab and node-red see https://community.openhab.org/t/node-red-as-alternative-rule-engine/29509
if you are using openhabian it is very easy to install.

Any how-to about setting up a working telegram-openhab integration + node-red?

Does this still work with OpenHAB2?

If so, can you explain a bit more, what is needed to make it work?

So far I installed the XMPP action addon and sending messages from OpenHAB to the messenger app (Conversations on an Android phone) works. Also messages sent to the OpenHAB server are shown in the log. But I don’t see a way to e.g. switch on a lamp by sending an XMPP message to the OpenHAB server.

Not sure, that it works with OH2, but for the latest OH1 it works perfectly for me:
( in config: xmpp:consoleusers=)

Thanks for your reply.

I don’t use the telegram messenger, so I would prefer to do this with XMPP (Conversations).

When sending a message from Conversations to OpenHAB I can see in the log that the message was received:

But OpenHAB doesn’t send an answer to Conversations.

On the other hand I created a rules file which sends a message from OpenHAB to Conversations when e.g. a thing goes OFFLINE. This works so far.

So the question is: what is missing here?

Hi all, just to know, is someone working on telegram IO module ?
Have a nice day

I have the same issue in OH2, and think I tracked it down. No idea how to fix it, but might try copying the code and building it, but figure it’s a much bigger change underneath.

In OH2, org.openhab.io.console.ConsoleInterpreter is provided by org.openhab.core.compat1x, and the handle*() functions are empty.

In OH1 they aren’t

For what it’s worth there is another workaround.

If you use Jython there is the python-telegram-bot module. I do everything in python anyway and this way it nicely integrates into my automatization scripts.

Unfortunatelly jython appears to handle sockets slightly different (explanation i don’t really understand) and you need to change the shipped urllib3. There is a platform dependent function is_connection_dropped(), I had to adjust:

After installing the dependencies you can copy the telegram-module’s example echobot to your jython scripts folder to get started. This way once the telegram bot receives a message all openhab-jython functions can be used directly without running another abstraction layer.

Hello guys,
I had same problem, so I decided to write a simple bridge application in java (spring boot) to control OpenHab using Telegram and REST API.
It supports only 4 commands at the moment, but works pretty well and is easily extendable. You can run it on the same machine with OpenHab.

Here is a description and instructions how to use it: 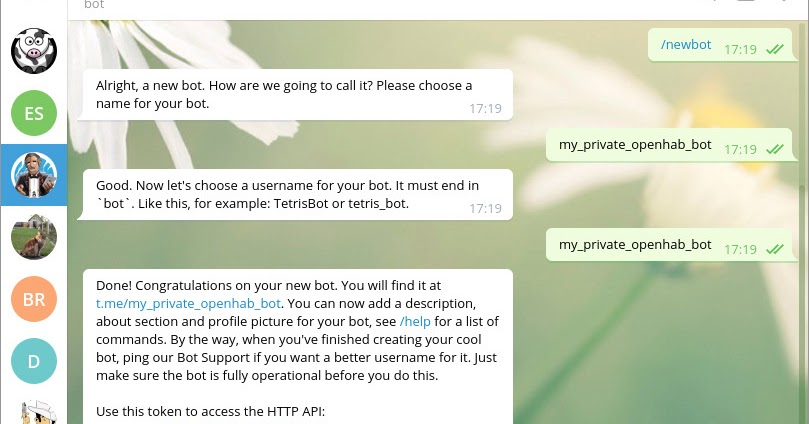 Recently, I've been trying to discover a way to control my OpenHab instance using Google Assistant. It is rather easy to do this using  IF...

For whom it may concern, I just use a python script that constantly checks the telegram bot “in the background”, creates a buttons keyboard in the chat after /menu command and receives any button press (commands to OpenHAB) forwarding to OH via MQTT

OMG ! I would love a Telegram Binding and as bonus the IO module. I cannot migrate everything because of that. I am right now using some fonction like my home ask me something and wait for an answer.

I can write the answer or click on Telegram action button.

About the I/O module, it will be mostly for my wife. instead of asking me per message I will tell her to ask the bot

Actually is there anything implemented with the Human Language Interpreter ?

unfortunately I am not Java dev

I would love a Telegram Binding

It’s here now. Example how to send a button to Telegram.