Please see Design Pattern: What is a Design Pattern and How Do I Use Them for an explanation of what a DP is and how to use them.

There are often times where one has a number of sensors of different types which aggregate up to a single status value. The most common of these is presence detection, where one has multiple sensors (PIR, Bluetooth, Network, etc.) any one of which can indicate someone is home (or at least their device is home). Another use for this is rolling up the online status of a bunch of services. 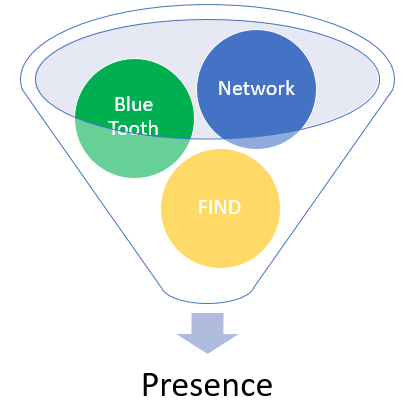 This Design Pattern works best when one can represent the state of all relevant sensors as a Switch or a Number. These switches can be combined and aggregated into Groups and the state of the Group then represents the final state (e.g. whether someone is home).

In this example there are two people who are detected by the positions of their phone. Each phone has multiple ways to detect its presence. The specific bindings/sensors used is irrelevant for this approach so long as the state can be represented as a Switch.

There are no Rules.

Thanks for putting this in writing @rlkoshak , very nicely done. Your rule refers to gPresent, but the example doesn’t define this anywhere. From what I can see, it should be gPresence? Yes?

Thanks, I was transcribing from my rules where I call the group gPresent but decided to be a bit more consistent in the posting. Yes, it should be gPresence. Correcting the original…

Great example, can you also post your sitemap for the design pattern? Also what would be neat would be to have “scene item” so that we could list out all the presence sensors detected, I made a sketch here:

I don’t put these on my user’s sitemap. My admin sitemap just has

Also what would be neat would be to have “scene item” so that we could list out all the presence sensors detected, I made a sketch here:

There is nothing in Basic UI, Classic UI, or the android apps that allow this from the display perspective. As four your “scene item”, I fail to see how that is any different from a Group.

I am trying implement this logic by adding a single Contact to a presence group, but I can’t get the group to turn off.

unifi.map translates the values to ON/OFF:

My sitemap shows both the group and contact status:

But my sitemap shows

Thanks in advance!
Dave

The map only affects how the state gets presented in the label.

Since a Contact Item will never have an OFF state the test to see if all members of gPresence is OFF will always fail, resulting in the Group’s state always being ON.

You either need to change your Group to be a Contact and your function to use CLOSED, OPEN, or you need to create a proxy switch Item and Rule to sync the Switch Item to your Contact Item.

he map only affects how the state gets presented in the label.

This is what I was misunderstanding. For me, having the mapping definition on the Item seemed to imply it would affect the underlying state (as opposed to just the label).

I changed the Group to Contact for now. If I add any non-contact items I will then add a rule.

PS @rlkoshak Thank you for all of your designpattern posts, they have been a huge help! Also, thanks for extracting them out of the bug designpattern thread.

In the original post, I think presenceTimer should be a var instead of val

Smarthome Designer was giving warnings of “Assignment to final field” with val.
Warning are gone with var

You are correct. I’ve fixed the OP. Thanks for the posting.

Since upgrading to OH 2.1.0, I’ve started seeing the following in my main log file:

I see it’s just an INFO, but was curious to get the groups thoughts

The longer story is the != and == operators test equivalency and call the .equals methods on the operands. So, for example, if you have two String objects with the same set of characters, == will return true.

But null is a primitive so it doesn’t have a .equals method to call and therefore it doesn’t really have the ability to test for equivalency. So the warning is saying you should use the identity operators, the ones with the extra equal sign. If you have to String objects with the same set of characters, === will return false because they are two different objects. The identity operator tests to see if the two operands point to the same object in memory.

This is one of the many updates I need to make across all the DPs to reflect changes since 2.2 and there will be more when 2.3 is released.