Hello
I’m having a trouble reading temperature from DHT11 sensor, what i’'ve done so far:

+P.S. i do not have 10k ohm resisstor(tryed different script and it shows temp just fine )

What happens when you run the script in the command line?

You’re not giving it much time to sleep in between reading temp. Also, if another script works, why not use it?

Ok, when i try to run the script error showes up and i double checked script and it does start with the import piqpio.

Sorry, i’m new to this. How much time does it need? And the working script was lost or deleted, because i’m trying to set up this sensor for the last week.

@Jaka_Smode here’s the Adafruit version, change as needed for your setup.

Ok, so i edited the code like this (picture) and its still doesn’t work 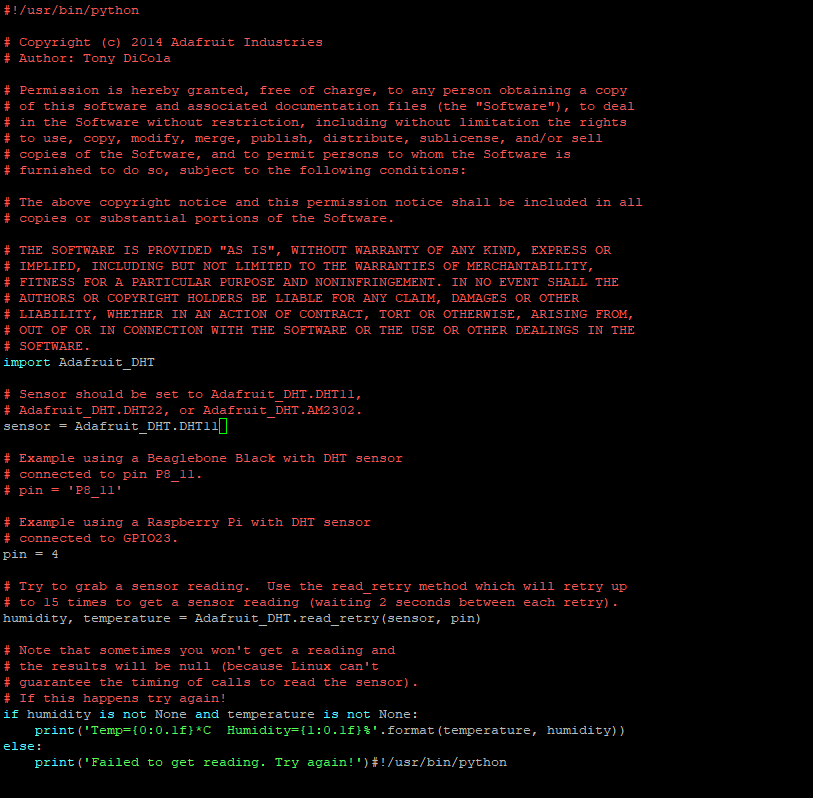 Ok, when i try to run the script error showes up and i double checked script and it does start with the import piqpio.

I don’t know, what the adafruit-script does… But this error message you got using your TempTest.py tells you, that your python-script uses a library called pigpio which you obviously didn’t install beforehand.

If this happens (regardless which module python tells you is missing) do a quick search on MODULENAME +python and it’ll show you what to do. In this case, just type in: pip install pigpio and it’ll install the desired module. But beware! - Accessing GPIO normally requires sudo power unless you configure your Pi to do otherwise. I bet, you got your python script somewhere - if the author did the right thing, he did include a “prerequisite” for his script and I guess you just missed installing the required modules…?