I mananged to get a running installation openHAB 2.1 with digitalstrom Binding on an RPI using the PaperUI.

Now all GE-Device (gelb) in THING are somehow not working. I do the same with a Szene/Stimmung and it working proberly in the HABPanel. I have version 1.42.10 of DigitalServer.

I’m new in this domain and I’m asking me what I do wrong.
Can somebody please help?

It would be great, if you could describe your issues a bit more detailed.
What exactly is not working ?
I am using digitalSTROM here as well and can confirm that it is running rock solid with GE, GR and SW devices.

I configured the think in Paper UI and add a switch widget in HABPanel selecting the new add think.
Then I try to switch and nothing happens. I did the same with Szene it is working fine like you said.

I hope it little bit better described. Thank you in advance for your help.

First, please check if your GE device thing is shown as online in PaperUI
Second, please post your item definition for the GE thing.

Yes, both configs are online in PaperUI. Unfortunately only Szene is working.

Here the details of GE thing: 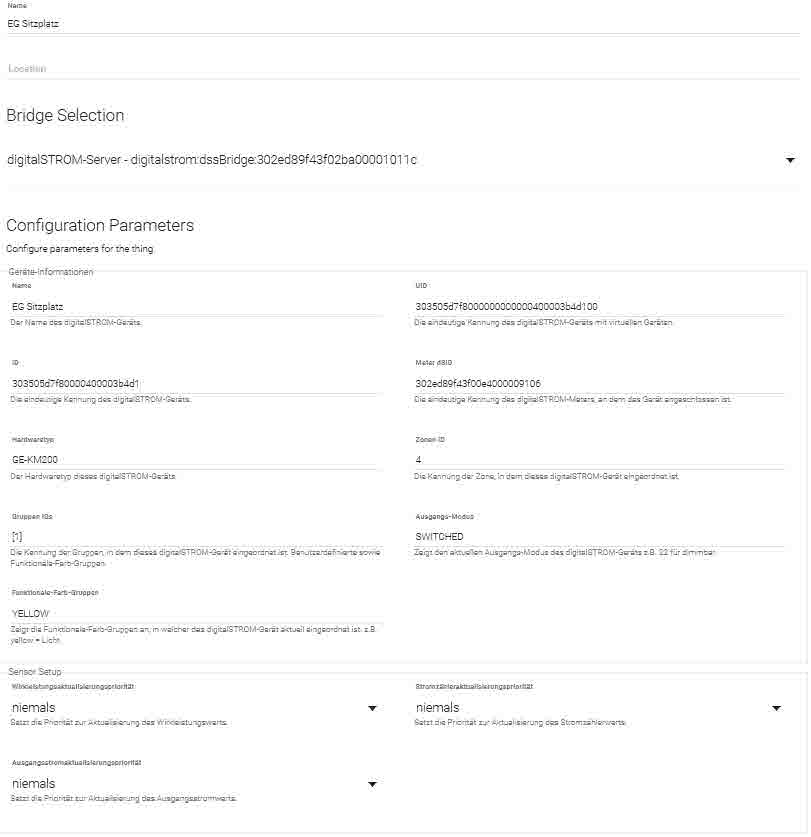 Thanks, but this is not what I asked for.
To control your device, you need to define an item in your .items file under conf/items.
This is what I wanted to see.

Sorry the item was create and linked auto. when I added it.
Is this what you are looking for?

Yes, but I have no expirience with auto created items.
I will try to rebuild your setup in my testing environment to see what’s happening.

I have created it also manually and again for Szene working for GE not working.

Before creating manually, did you delete the automatically created items ?

Yes. And created everything manually.

I guess you don’t understand me, I am asking for manual item vonfiguration through as .items config file, not manually created with PaperUI.
something like this

now I can see the status of light in all panels when i press the wall-switch, BUT is not working on the Classic / Basic / HABPanel when I press the virtual-switch

I know, because it is a complete new installation on an raspberry and new channel.

could you please change the title from “DigitalStorm” to “DigitalStrom” so the thread could be found also in the future.

Channel is build by DSS and device id, which don’t change by a new installation as they are hardcoded serial numbers…

Finally I had time…

I did like you proposed and I have done everythink manually