Yes, i live in a very active zone regarding earthquakes… Every time we have a little shake i try to go online, find some website to learn the center and magnitude of the earthquake, call son, wife and friends-relatives in order, which takes some nervous time actually…

So what i thought, OH2 can periodically check the earthquake database and inform me if the epicenter is within a given radius and higher than a given magnitude. So, first step i get the last 24 hrs information from a web site and convert it to json with a script:

Now i have this deprem.json file having all earthquakes within the last 24 hrs. And… Yeah i don’t know what next

Should i deal with a javascript or python or whatever. I simply guess it is not ready for JSON transformation to OH2 since i did not made the filtering yet for the magnitude and location. I think that after filtering out to a maximum of 2 events, i can get it from a rss with feed binding, or directly from JSON transformation to a String variable or Pushsafer binding.

Is there anyone who can direct me into the right path?

EDITED:
I decided it is too early to output the file into JSON. I am parsing the file in Python now and will only output JSON for most important ones.

Have a look here:
https://community.openhab.org/search?q=openhab%20json

So what i thought, OH2 can periodically check the earthquake database and inform me if the epicenter is within a given radius and higher than a given magnitude.
[…]
EDITED:
I decided it is too early to output the file into JSON. I am parsing the file in Python now and will only output JSON for most important ones.

That’s an nice solution!
When you get it going, please share your findings.

The website is excellent. It captures events also in neighbor areas so I will also use it

@Dim Hi Angelos, that’s the exact point flood of earthquakes in the map we are facing for the last couple of shaky days

I wrote a python script that downloads the csv file, correct encodings, select earthquakes within a given radius and select earthquakes larger than a given magnitude, and write these selections to a json file. What i am after is to display the highest magnitude in the last 24 hrs as magnitude and location as a text item in the sitemap and all the others in the sub page of the text item.

@cgeo Thanks for the information, i did’nt knew Fibaro had seismograph mode. I will definitely check it out, if it it’s not affected by the bypassing trucks and playing kids, that’s exactly the product i am after

So, sorry for the code, probably not everything is efficient since this is my first python attempt. The code exports 3 files;

For those who will attempt, probably you should change some code in order to make script work with your local Earthquake information provider. Since mine only exports in CSV file, i had to do this with a script.

Also, you should define a cron rule to execute the script every minute or so…

did you catch the latest one ? I think that it is within your radius = 100

Yes it did since the magnitude is greater than 5. 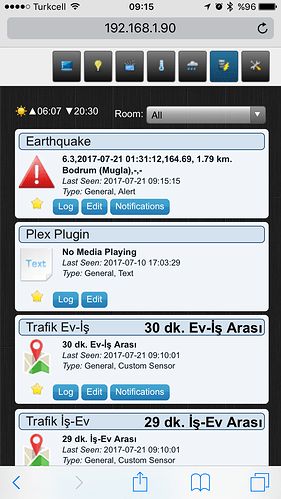 But unfortunately it has been feed to the system (By the government web page) only 15 mins. after the earthquake, or probably because of web site availability issues. I think the best way is to install a Fibaro Motion Sensor as Christos suggested, so that i will be notified instantly during the earthquake.

I also made some research for additional sensors or small size seismographs, but reached nowhere.

In the meantime, i found an application called Zismos eQuake, both for ios and android. What it does is to use smartphones as earthquake sensors, only if it is in charging state and not moving, stable mode. So that it can send a notification during or even just before the earthquake. Brilliant idea if you ask me, unfortunately it doesnot have an API to use for 3rd party integration.

So i hope our friends in Kos island are all OK and nobody hurt. Since we are a traumatised generation because of 1999 Earthquake in Turkey, everybody in Bodrum are really scared and returning back to their homes from their holiday in Bodrum.

I think the best way is to install a Fibaro Motion Sensor as Christos suggested, so that i will be notified instantly during the earthquake.

I also made some research for additional sensors or small size seismographs, but reached nowhere.

I don’t know how well these sensor products will work.
They have an embedded tamper sensor (accelerometer) that triggers upon vibration.

I have both the Fibaro FGMS-001 and the Aeon Labs MultiSensor 6.
The related settings for the FGMS-001 are:

Seismograph mode:
The Motion Sensor can be configured to work as a simple earthquake detector, by setting the parameter 24 value to 1. Reports with scale of the vibrations (in the Modified Mercalli Scale) will be sent immediately
after vibrations have been detected. Minimal power of vibrations that will be reported, can be set in parametr 20. Once the vibrations cease and time of sustaining alarm elapses, reports will be stopped.

Orientation in space:
The Motion Sensor has a built-in accelerometer. When the parameter 24 is set to 2, Z-Wave network controller will be informed on the Sensor’s orientation in space by sending report after triggering tamper alarm.

For the Aeotec Multi 6: I still haven’t found how to adjust the tamper sensor settings…

I hope everybody is ok on both sides of the Aegean