finally I managed to get the ebus 2 binding into my openHAB but I do not understand how to get any data from my heating system.

Can someone please explain me how to set it up properly. I have a lot of ebus devices now in my things but no data is showing up. I want to configure everything with Visual studio code but Im not sure if it is right what I’m doing!

This is an example of one item. 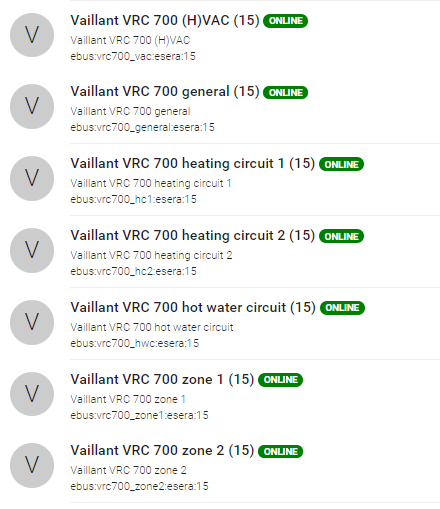 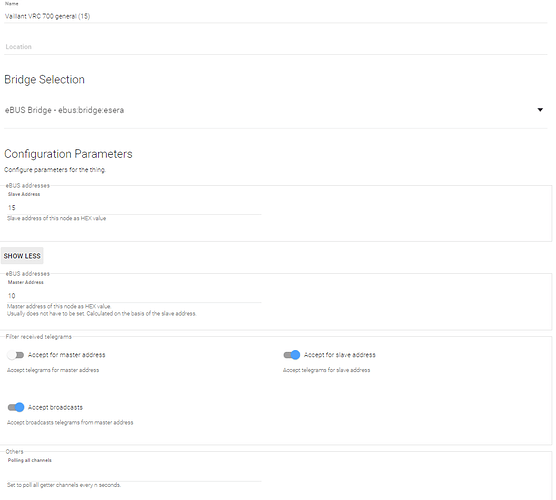 Never used the binding but try using channel= in place of ebus= in items file and please use code fences. It’s the paper icon to the left of the gear icon.

Also what is the last part of the channel about?

You should be able to copy the last line (from screen shot above) of each item for the correct channel syntax.

Maybe this is all thats needed:

Thank for the quick reply. I copied the syntax of each channel out of the paper UI

Replacing ebus by channel did not work!

Only create items in either PaperUI or files…never in both and make sure you do not have “simple mode” turned on in PaperUI. You may have a situation where duplicate links/items exist thus the reason some not working.

Look in: /var/lib/openhab2/jsondb/org.eclipse.smarthome.core.thing.link.ItemChannelLink.json and make sure there isn’t a Link hanging around.

If you have duplicate stop OH first and edit the file to remove them then clean the cache and restart.

EDIT: @xxx_turbo_xxx
Just checked the doc’s and no channel needed so try with ebus and leave the extra stuff off the end like below.

EDIT 2:
The extra stuff on the end, if needed or wanted, should be separated using a . not a - so you may want to try that as well.

I made a fresh installation today so I can rule out that there is a problem caused by mixing paper Ui and files. I made everything in files and I tried the Paper Ui in my previous installation. I’ll try the different syntax.

I made a fresh installation today so I can rule out that there is a problem caused by mixing paper Ui and files.

I made everything in files

For most bindings it’s recommended to create the Thing in PaperUI and use files for items to help prevent syntax errors with the channel.

Still not sure about the extra stuff on the end in your first example so I would try both ways and see what happens.

Is this load consistently high or does it vary? What are you running OH on?

Works pretty well with all my other stuff… But not with this eBus. It is driving me crazy. This Binding is actually the reaso why I’ve spent weeks now to get into this Raspberry stuff as my heating costs are by far too high and my plan was to reduce costs by optimising the system settings. But firstly I need to log data an understand what is going on there…

Did not manage to get it run with different syntax. I think the general problem is that there is nowhere a proper description or manual of what the binding is doing and in wich way it works. If you understand a system it is much easier to find problems…