In the M1XEP settings in ElkRP, do you have the unsecure port (2101) turned on? 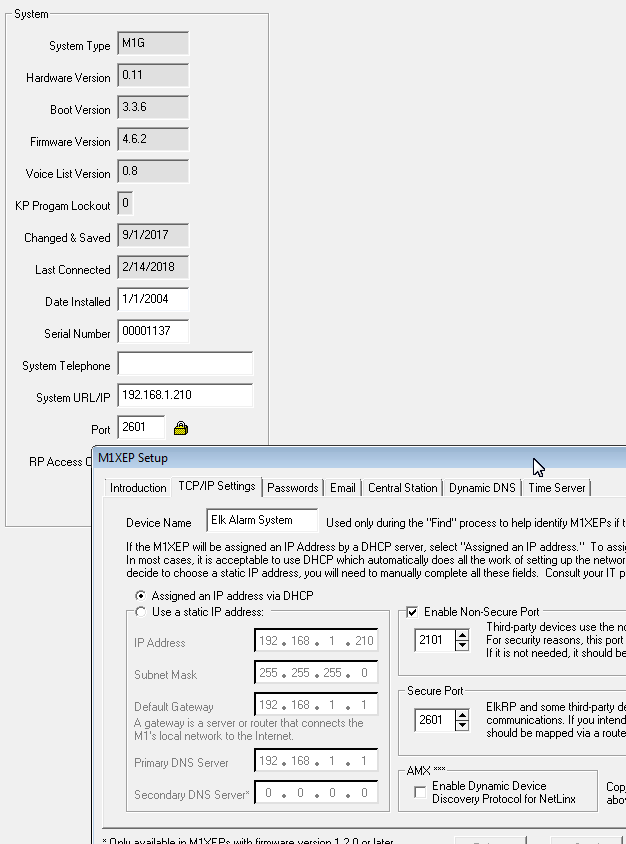 I have tried configuring OpenHab with port 2601 and got the same results, which is to say nothing happened at all. No errors, no logs, no nothing.

Trigger some stuff on your Elk and check your events.log file to see if the ElkListener item value changes.

Then toggle the switch on and off via the sitemap:

Watch your Elk through ELKRP and you should see Relay 3 switching on and off as you toggle the switch in OH.

Just double-checking, do you have the TCP binding installed?

I don’t have any special settings in my tcp.cfg file.

Below is what I see in the logs when OpenHAB boots. Do you see this?

@SkipMorrow, @davez34 Makes a good point.
To be sure, type this at your OH console bundle:list
You should see ‘openHAB TCP-UDP Binding’ listed, please report the version listed, it will be something like 1.12.0

my tcp.cfg is all comments, so everything is defaults.

So, no, it doesn’t look like TCP binding is starting correctly.

I think we are getting somewhere???

By the way, thank you all SO MUCH for the help! I’m a fast learner with this kind of stuff, so I think once we get this working, I’ll be setting stuff up like crazy!

I messed up the definition of the second item, I forgot to update it to reflect your setup.

Not sure what to make of your startup log. Once you have updated your items file, maybe try an OH restart. That seems to fix weird stuff for me, especially with the TCP binding and is worth a go.

Does anyone think this is a network setup issue, or is this an OH configuration issue? I was thinking this afternoon I could try using PuTTY to connect to my XEP and see if I can observe the commands and responses there.

Checking with Putty sounds like a great idea! I don’t know enough about OpenHAB to say if its a network or OpenHAB config issue.

Perhaps, try my .items example and not mcquerty’s example?

I don’t have anything uncommented in tcp.cfg

If you want to try mcquerty’s line, try uncommenting the following in tcp.cfg

I am not sure about the exact meaning of those issues in the log either but it does mean that the TCP binding is not setup correctly to carry out the command.

In addition to the tcp.cfg settings @davez34 suggests, also try adding the following:

Make sure everything else other than those six settings is commented out.

I know it’s a pain, but I would try restarting OH again after making those config changes.

I’m at work, so I can’t test until this afternoon.

In general, I have noticed that changes to the conf/* files get reflected right away by OH, but there have been times that I have needed to restart. I haven’t cracked the code on when restarting is needed, so I have lately been just restarting each time. Fortunately it’s not too much of a pain since it only takes a few seconds.

I was also thinking about using Wire Shark to watch the traffic between OH and the Elk. I hope to get this figured out before Saturday because I am going on vacation and I won’t be able to work on it at all, and I don’t want to have to recall of my troubleshooting efforts when I get back. Crossing fingers.

I’ll be honest, I don’t fully understand the whole .items entries yet. I would have thought the parts after the ip address:port (":default" or “REGEX__”) was some sort of filter to test incoming messages against. Since default looked like it was the most general, everything would have passed through it, but instead all of the traffic seems to be passing through the Elk Relay 3 item. I don’t get it.

In general, what would be the strategy for doing something when an arming status message (AS) comes in, indicating zone 1 has been armed away (“1EAS1000…”)?

Figured it out. I had to switch the tcp direction.

According to the documentation tcp=> should be for outgoing messages though, so it doesn’t make sense. But it seems to be working.

I could still use some guidance on how to best read the incoming messages, decode them, and do something. I hope I don’t have to write a rule for every conceivable message type out there, Looking for an overall strategy here.

Hi all, been following this thread for a while, I am looking at OH as a replacement to HomeSeer, and the M1G integration has been an issue moving forward… However thanks to the work already done here with the TCP binding I think I’m caught up now - I have incoming messages from the Elk being logged as zone violation and zone normal, however since the motion sensors don’t show up as items/things I’m not sure what the next step would be to make use of the data.

I am thinking that some kind of dummy item needs to be created for each Elk input and then a rule created to set the status of that item based on the incoming messages, possibly as an action in the existing “Elk Parser” rule.

I tried creating a dummy item like this for one of my zones (Zone 003) and made the following changes to dynamically build the item name from the triggered zone:

But, this only logs an exception

Perhaps I am using the wrong type of item… I’m still getting my head around OH… OR, is the idea to define each sensor as an item with its own ON/OFF string similar to the relay examples earlier? Not sure how we’d do this with potentially varying checksum info being part of the string…

Awesome - that did it! So I can now use the virtual ‘Zone003’ device in the UI Rules editor and trigger events based on motion. Will need to read up on the toString part - I thought that setting the item type to ‘Switch’ would only allow ON/OFF options (boolean) rather than requiring a string, but this works

hey all! New to openhab, but not home automation. Wondering what the status of the Elk m1 binding is? Is there a group actively working on it? What things are supported with it? Whats unsupported?
Thanks!

Anyone know if there is a way to get the user that arms/disarms the Elk from a keypad? The “a0” and “a1” commands can be sent to the Elk with a user code to disarm/arm away the system, but the tcp item I have coded up doesn’t seem to see the commands when they are sent from a keypad to the M1.
Elk command manual:
https://www.fixagate.com/assets/m1_rs232_ascii_protocol.pdf

Have you tried using the log data using (ld) command to get a (LD) response? You can probably read index 001 as soon as you see a a0 or a1 message.

No, I have not tried the ld command, but it looks interesting. Anyone have any examples of how to use it? I’ve not tried sending any commands to the Elk before, but it is something that I want to eventually do. I want to send display messages to the keypads. But for now, if I can figure out the last person to disarm the system, that will be perfect.

I do get the arm/disarm messages no problem, I guess I would send an ld command right back to the system when I get the message that it has been armed/disarmed??? How is that done?