Errors when trying to import addon project into IntelliJ

Hello, I was trying to setup an IDE to start working on an AddOn myself (btw. an HelloWorld tutorial would be great to get started). However, I am getting a lot of errors, when trying to import the project into IntelliJ.
I also got a lot of what seem to be kind of similar errors when trying to install eclipse, but as I actually like IntelliJ better I thought I could just leave eclipse alone… 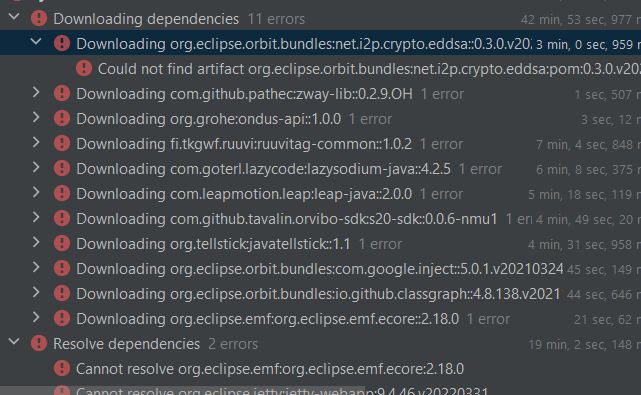 Did you checkout the latest openhab-addons? Or is this an older checkout? You can also try building on the command line with maven and see if that works out. I can’t remember what I did, but I currently see to errors in my project in IntelliJ IDEA.

It might be that IntelliJ is trying to fetch dependencies but it fails. It might be due to network itself, but it can be also missing a maven artifact repository which should come over a parent pom.
By default if you import project the first attempt goes over maven central unless top level pom has repository elements in there. I think OH addons might not have it, but its parent does. AFAIR openhab parent is released to maven central so it should work.