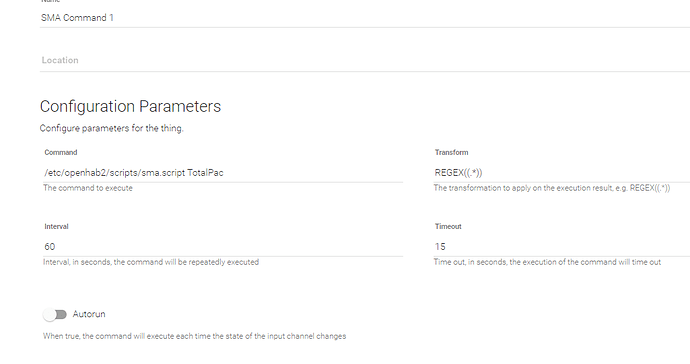 The file is there and I can run it from the command line, it is permission 777 to overkill it

For those who are interested I am sharing the integration of a SMA inverted rectifier into openhab via bluetooth, SBF spot and a mysql data base. The SMA inverted rectifier has a bluetooth interface which is normally used by a SMA Windows software to fetch the production data. My openhab installation runs on a VM using Debian Jessie as OS. The intention was to visualize at least the current power, the daily harvested energy and the total harvested energy: [image] The key software which is coll…

I think you are mixing up the term script.

Unfortunately in OH Script has a very specific meaning. A Script is a piece of Rules DSL code that you can call from a Rules DSL Rule. Vincent is correct, you cannot pass parameters to a Rules DSL script.

But you appear to be trying to execute a script (I use capitalization to distinguish between generic terms like things and items and OH specific terms like Things and Items) using the Exec binding. This is something completely different. First of all, these scripts are not Rules DSL code. They are shell scripts or python scripts or perl scripts or the like. You CAN pass command line arguments to these scripts. If you add %2$s to the end of your Command, then what ever state that the Item linked to the Input Channel will be passed to the script as an argument.

So a final couple of things to say about scripts. First, these should NOT be placed in the conf/scripts folder. That folder is intended to store Scripts. If you use the full path to execute it then it doesn’t really matter where you put it but in the past putting it in that scripts folder caused problems (probably not a problem any more). Second, you should use an appropriate extension for the script. Based on the thread you linked to this is a shell script so it should be named sma.sh.