my fibaro motion sensors battery life has dropped to 66% within 2-3 weeks. is that normal?

also it keeps detecting motion even when there is no one present in the kitchener. I have reduced the sensitivity to the lowest level but still it keeps getting triggered.

No, it’s not. My FGMS001 is active since about 6 months now and battery level has dropped to 92%.
In the screenshot you can see my configuration settings, wakeup interval is set to 7200. 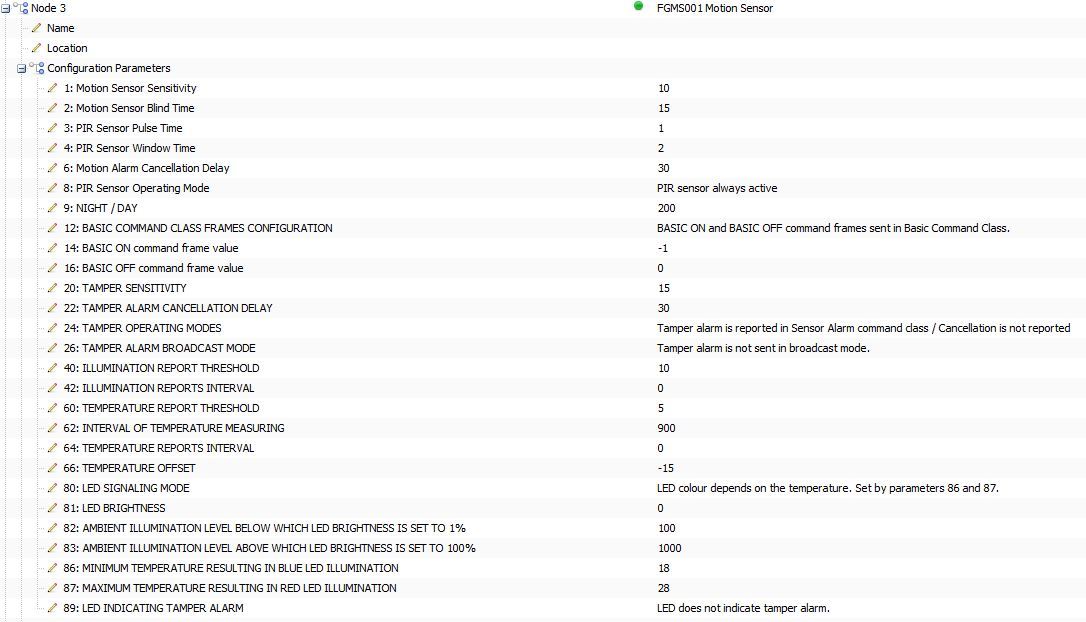 It is not normal no, My two FGMS001 has been active for 3 months and at 98% battery. My configuration is set to report more frequently.

Thanks. I changed the temp and illumination reports interval to 0. lets see if it makes a difference.

Here is another possible problem with those sensors … I don’t like what I read there.

I’ve noticed the same. 2 out of 4 of my sensors “died” till today. Only 3 months of use. The second one just today at 74% battery life left. I have to buy a new battery again. maybe there is a real problem…

I have got rid of all of these sensors. Using aeotec multi 6 sensors now.

I’ve just adjusted my Config. Had some very battery-consuming settings. I will keep an eye on battery drain.
Before I had reports send to Controller every minute and every change in 0,1C temperature and reports every 1 lux change.

Does it save measures i.e. when I set up temperature measure every 300s (62) and temperature report every 600s (64), will i get 2 values or just the last measurement?

@chris how to get battery levels periodically…?

how to get battery levels periodically…?

Battery levels can be sampled periodically by configuring an item linked to the BATTERY command class. This will be sampled every hour, but it can only be requested when the device wakes up, so it depends on the configuration of the wakeup class.

Don’t know what problem you guys have but my sensors are working fine, you should have returned them.
i have got mine 4 years and had to replace the batt once till now

I only had problems with the Fibaro Motion Sensor. So in the end I send it back. Going for the Aeontec Motion Sensor now, which has a humidity sensor as well.

Watch out: sensitivity ranges from 8-255 where the lowest value (8) respresents the highest sensitivity. With sensitivity set to 8, I also noticed erroneous motion detection and consequently increased battery usage

my fibaro motion sensor battery life has dropped to 87% within 6 month.
At this rate, it would probably end up.Seems like the battery life is indeed on the short side.
The wake-up interval of motion sensor is two time in one day.At 87% of battery level, It does not detect motion.
is that normal…?

Seems like the battery life is indeed on the short side.

At 87% of battery level, It does not detect motion.
is that normal…?

No. Did you change any config parameters?

Yes I have found the Fibaro motion sensor to be very good with battery life. I have a couple and they have been running happily for well over a year and are still reporting 100%. They are only set to wake up every 12 hours and don’t report temp/lux - just motion.

rm65453 can you say more about aeotec multi 6 sensors ? are they better than fibaro ? i want to buy a amotion sensor and can’t decide which one.

are they better than fibaro ?

Hi, I'm trying to make sensor working, and I succeeded to some extent. I have all sensors working except for alarm and motion. I can see alarm triggering in logs, but not changing state of item. My conf is: Switch Hr_Kitchen_AMS_Alarm "Alarm [%s]" (gH_Kitchen) {channel="zwave:device:c76af4c3:node5:alarm_general"} I tried contact, switch and even string items. No luck Another problem is with motion sensing, it's not triggering. I thought that sensor may be faulty, but after conne…

Unfortunately with batteries such as these, it’s very difficult to accurately display the correct battery level, since the voltage/current characteristics depend on the battery type, quality and on environmental factors such as it’s temperature.

These devices will often report the same percentage value for a very long time, until suddenly there’ll be a quick drop, and even though it’s higher than 50% the device won’t be able to draw enough power to operate correctly.

I’ve seen this with both the Fibaro and the Aoetec sensors (the latter I am currently not using), they would be on 100% for a long time but after a more than year they would drop to ~92% before they started faulting. This has been consistent with the batteries I have been using (since I bought a multi-pack). My advice would be to look for a sudden drop in battery %age, and raise a low battery alarm through a rule.