Has anyone used this sensor? I’d like to use it in my family room, but wanted to know if anyone had success with OpenHab 1.8

I do not, but maybe it helps if you add the correct fibaro part number of the device? And have a look at the zwave database:

Is it already listed there? If so, you have a good chance that somebody is using it already. If not, it has to be added to the DB first, otherwise it will not work with OH.

Has anyone used this sensor?

If you mean the FGMS001: yes, works without any problems.

I am having terrible difficulty with this sensor (new version with 5 association groups).
Initially, I thought that the reason I wasn’t getting motion events was that I hadn’t used the correct Association Group and, when I changed it, it seemed to work. However, I can now not get it working again. I have previously seen Lux, Temp and Motion updates but now I only get Lux updates and no Temp or Motion events.
Messing around with it, I have had it working, not working, working, not working etc without ever getting to the bottom of it. Below is my setup - I would really appreciate any assistance because I have been banging my head against a wall for over 2 weeks now (I have used various other sensors and have always got them working quickly and all of my other sensors on this system are operating correctly) 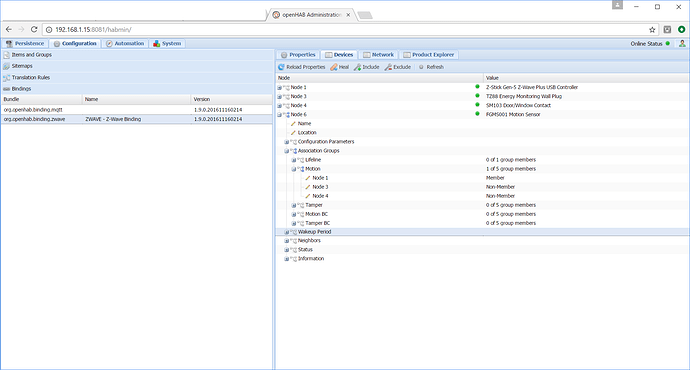 I have the slightly older sensor and am not using openHAB1 anymore, but maybe we can get it to work anyway:

And please try to paste the text code you wanna have checked, not a picture … it’s horrible to type everything that has to be changed instead of being able to do a copy and paste … thx.

I’ve also experienced a lot of problems with this sensor before I got it working.
I have Z-wave plus version (Gen5), however I’m also running it under OH2.
I don’t know much about OH1, but for OH2, I had to

Make sure the device is fully initialized. It can take a long time before it is. Mine wasn’t and that caused problems, some functions worked (Like reading temperature and light), whereas the actual movement trigger didn’t.

In general my experience with z-wave is that it can be quite tricky to initialize the devices, include them in the z-wave network to get them up and running. Once they are included and properly initialized they seem to work quite well.

Hi Seaside - thanks for replying - doing a hardware reset on the sensor did seem to help and I got it working almost immediately after re-inclusion. Thanks for that. Incidentally, I get two x ON and 2 x OFF from the motion sensor - do you and, if so, did you manage to get round it?

Hi sihui - thanks for replying - I actually got somewhere following seaside’s suggestion to do a hard reset on the sensor so I’m going to give it a go. As I write, I am receiving motion events on Association Group 2 and I have seen Temp updates too.
And point taken about code not images.

No I have not noticed that.

I have the following items:

And when triggering the detector both the burglar alarm and the motion sensor are triggered.
I have a rule that looks on several items, so it can be triggered multiple times. I use a Lock to keep the same code from executing several times at the same time.