I have bought a Z-wave USB stick (UZB1) and have installed it in openhab.
The port is: /dev/ttyACM0 and it shows online in paper UI.

I also bought a Fibaro plug v5, but can’t seem to discover it in openhab. Using the auto discovery from the Z-Wave binding, but it can’t find it.

Looks like my fibaro plug is connected to the Zwave network, as it lights a “white” color and can turn it off by clicking 1 time on the button (the real button in the plug device).

How should I add this device?

Can you describe exactly what you mean by “can’t seem to discover it in openhab”? Does it not show up at all in the inbox? If not, then it’s likely that it is not included into the network.

Or do you mean something else?

How do you add the thing into openhab? As I said I have installed the Z-Wave binding and added a controller using the port provided (/dev/ttyACM0)

Now I want to add my fibaro plug as a thing. It is already white color = active, but when I click on configuration --> things --> add --> Z-wave binding --> Searching for Things… then it finds nothing to add. That is what I mean.

I’m sorry for the dumb question. But, since you didn’t mention it, I need to ask…

Are you pressing the button on the device (the manual says how many times you need to press it) after you put the controller into include mode. You have 30 seconds to do that.

So how do I start the include mode for the controller? I have pressed 3 times, but not sure it was in include mode.

In HABmin, click on the search glass and select ZWave binding. 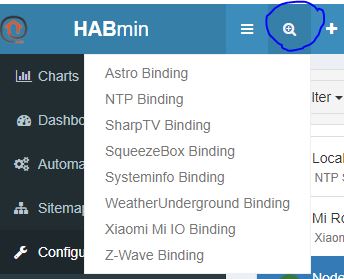 You’ll see a message flash in the upper right part of the UI that says you’re in include mode. From that point you have 30 seconds to triple press the button on the device.

Then by clicking on the little plug thingy, you should see it show up in the inbox, similar to this:

Hmm, okay, I’m doing it right… but it just haven’t been discovered yet in the network for some how… weird.

So it’s not showing up in the inbox. That’s odd.

You could try excluding it from the network, then including it again.

Alternatively, you could do a factory reset on the device, then including it again.

Managed to get it to work

Had to reinstall openhab completly and install snapshot 2.2 before it worked.