Does anyone have recommendations, or information on automatable vents? I’ve seen some systems as much as $200 per vent and I really don’t want to spend that much. I saw a company on alibaba selling vents for somewhere in the $5-50 range that claim to work with some wifi, but they want a minimum order of 50 vents, I have 22 vents in the house.

What kinds of vents do you have, and approximately how much did you pay per vent ? I don’t know if it’s possible to message other users directly, and also probably not cool but I saw @waspie posting about vents and wanted to ask what he had.

Heating efficiency by turning off heating to rooms that are at temperature. My house seems to heat unevenly e.g. heats a lot faster in some areas than others, the Thermostat is in the middle, and sometimes rooms don’t get up to temperature before the thermostat decides it is done.

I have a Nest thermostat, and Nest smoke detectors, I’m willing to buy some temperature sensors, I’d like to turn off heat to rooms when they’re up to temperature. I might look at automated blinds in the future.

This is precisely why i did what I did. I purchased different size “vent miser” vents from ebay. they range from 10-30/vent. there’s a little timer/controller in it that powers a small motor. I use esp8266s of varying makes (mostly nodemcu v3 but i’d probably do all wemos d1 minis if i was starting over).

I had a controller for each vent for a while but after a time started to consolidate them by running 22awg 2 conductor wire back to central spots. 3 rooms are above our garage so it was easy to pass the wire straight down into the garage and have a controller there for 3 of the bedrooms and a family type room on the other side of the garage and then another controller in the utility room handling another 5 vents.
A couple rooms still have their own controller but eventually I’ll eliminate those, too.

Temperature in each room is sensed by another esp8266 with a single 18650 lithium-ion cell strapped to it. it checks in every 4-5 minutes from deep sleep. it lasts about 5-6 weeks on a charge. i’d like to hardwire temp probes back to the central controllers eventually but i havent decided on a discrete enough way to handle that, yet.

I also take some control over the furnace with a handful of relays. The Nest runs things during the day, but at night i’m only interested in the nursery and master bed. I can use the relays to cut the 2nd stage of my furnace and lower the fan speed. if more rooms (guests staying the night?) need heat i can re-up the fan speed and gas flow. if one room heats up and closes vents before the other then i have rules that open vents to heat/cool rooms that need it most overnight.

If i want to balance temps a little but I can run the fan while closing upper vents and opening lower vents to redistribute the heat. 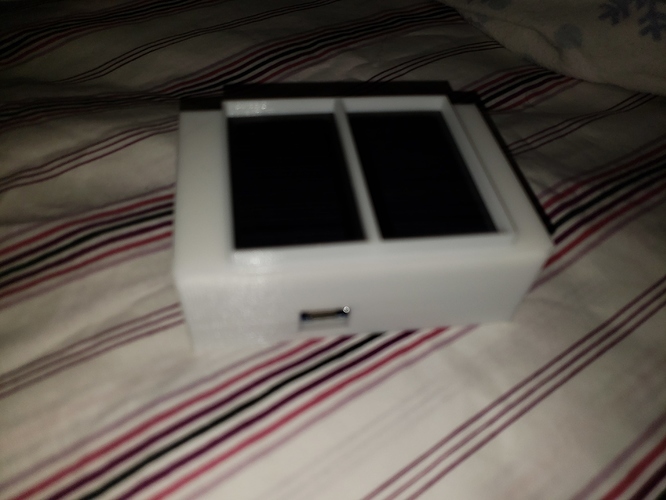 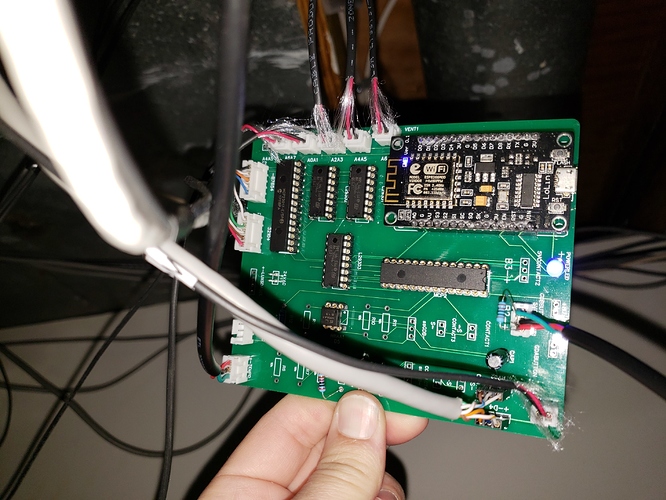 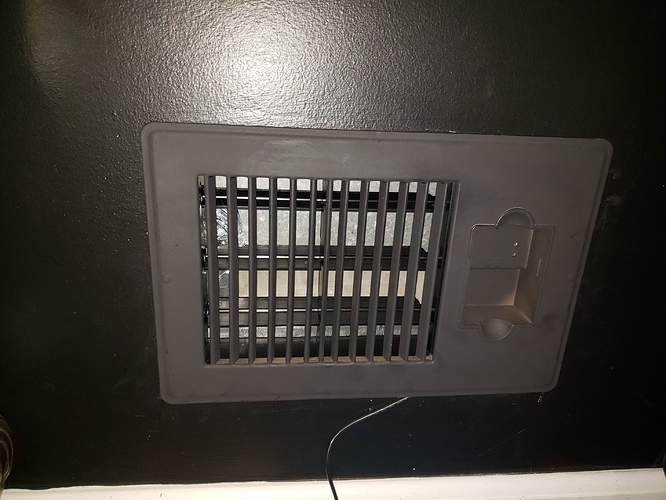 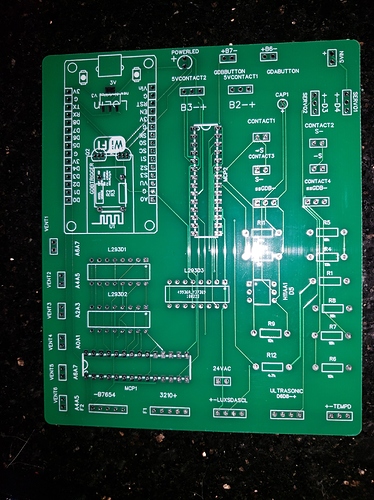 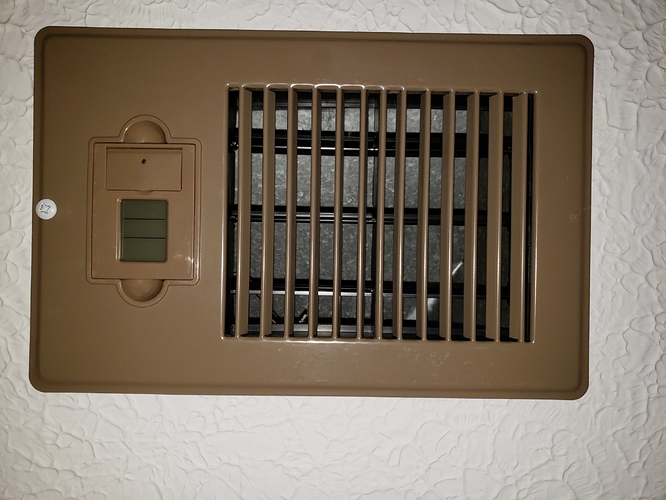 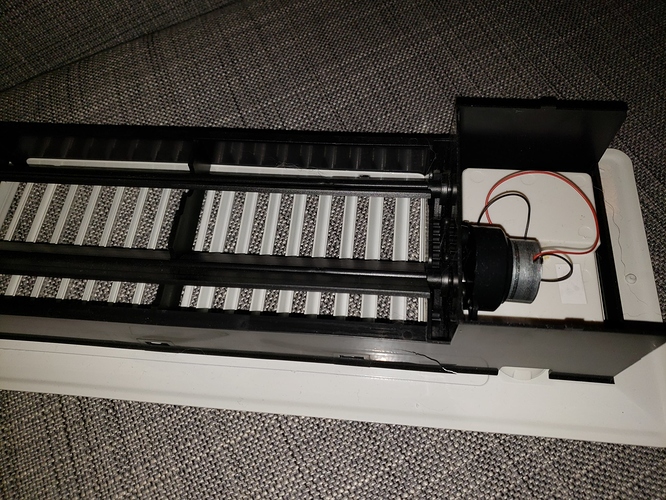 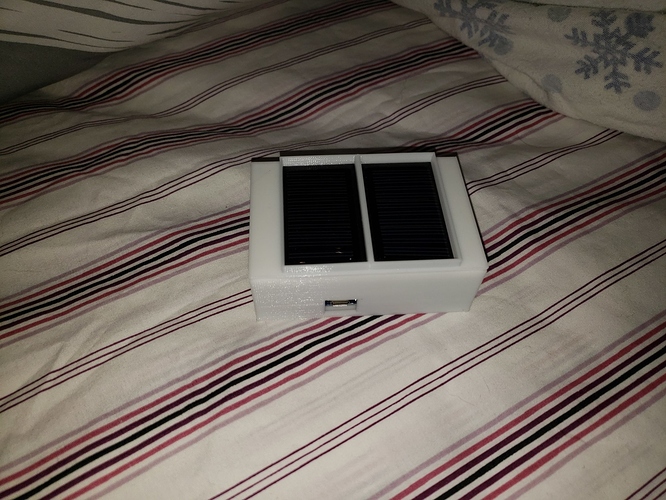 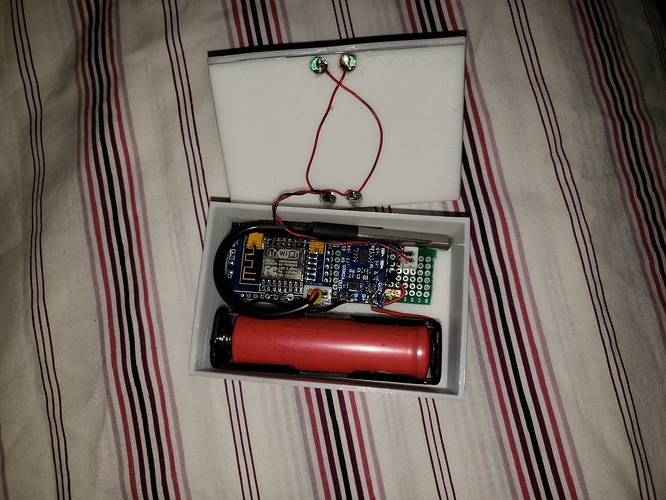 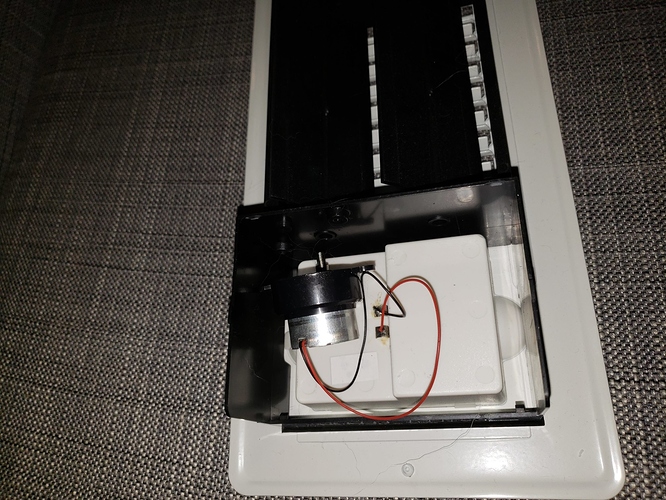 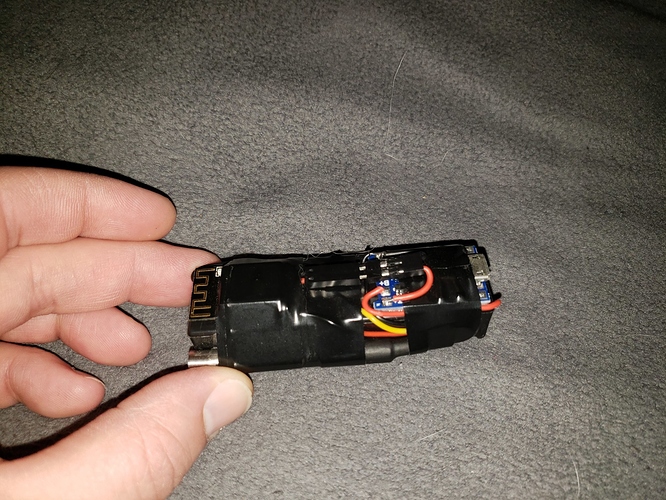 ive gone through a few different iterations of temp sensors. the last one is very minimal, the other is a 3d printed enclosure i made and added little solar panels on top. various pictures of the vent misers so you can see what they’re about. the black plastic part can be removed and grafted onto another vent of your choosing if you desire or you can spray paint it.

the custom designed board i designed and ordered from easyeda.com and it was way easier than i ever thought it could be and the boards come out to like 3$ a piece.

The ESP8266s all run easyesp (www.letscontrolit.com). I could have eventually programmed them to do most of what i want but easyesp makes things…easy. i can focus on the openhab rules and then set up the esps to do what i want with very minimal fuss. there’s a mini rule engine on esp easy that can make basic decisions based on what openhab sends to it. it can also answer back when commands are sent so that i can detect if there’s an error. i’m happy to share rules and more if you’d like.

Awesome, thank you for Replying!

It’s not inexpensive, and it’s kind of convoluted, but I figure I’ll share about my setup since I do have some vents working.

I’m using Keen Home smart vents from https://keenhome.io/. It looks like they’ve gone up in price since I purchased as they are now $100+ per vent.

Here’s the convoluted part. I have them running on a SmartThings hub that I purchased specifically for the task. They use the zigbee communication protocol and at the time I purchased them there didn’t seem to be any openHAB support for zigbee. Since I was in the SmartThings environment, I also purchased a SmartApp which allows me to configure multiple zones and multiple rooms in each zone and set threshold temperatures at which the vent opens or closes if the temperature in the room/zone is too high or low. This kept me from needing to make any rules within openHAB for automatic management of vents.

From SmartThings, I have another SmartApp which connects items to MQTT. I have all of my vent items publish to mqtt and also subscribe to a separate MQTT channel for the same vent item. OpenHAB also subscribes to the MQTT updates from the vents and publishes when it receives commands from me that SmartThings receives and passes along to the vents.

It has been working well enough for me, and I love having smart vents to keep each room as comfortable as possible. Both houses I’ve lived in during the time I’ve had the vents had some serious balance issues if not using the smart vents, so it has been really nice.

My solution is definitely convoluted. I would love it if I could use the Keen Home hub itself to connect openHAB to using a Keen Home api, and then I could leave SmartThings out as it doesn’t seem to be the most reliable thing. Also, the vents work great when they’re working, but sometimes they just stop without warning and it may be a while before I realize that they’re not working.

I’m happy to answer any questions you may have about my installation, and would love to hear more about your installation if you figure out a great and inexpensive way to do it. Good luck!

I made up a very simple schematic and pcb for using a wemos d1 mini to control two vents.
all you need is a wemos d1 mini, an l293d dual h bridge, and some connectors. i could clean it up and share the board with you on easyeda and you could eventually order boards if you wanted. if you can solder then the rest is a piece of cake (though i think this can even be done via easyeda). one day i’ll write up a nice post end to end on my rules and esp setup. 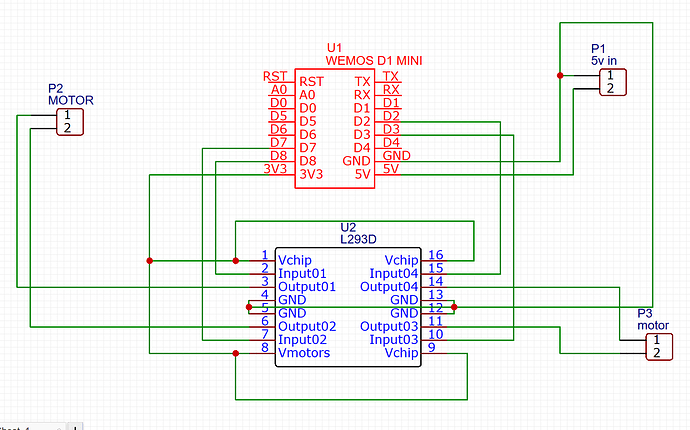 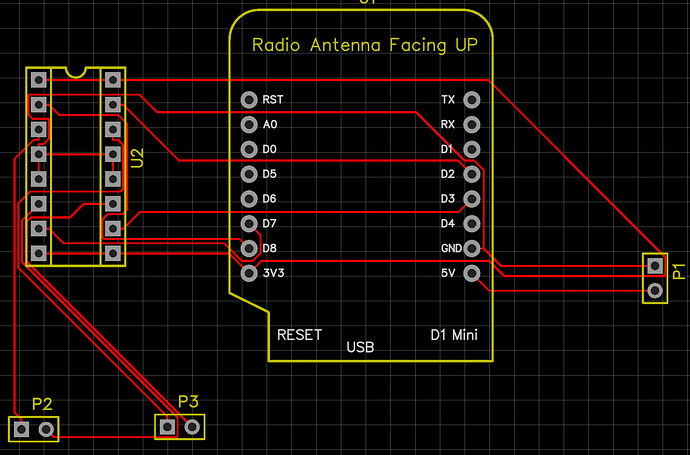 There is some significant work being done in the WinkHub space. Offering to implement the Wink Hub 2 bindings

Since Wink supports Zigbee, and you probably don’t need anything SUPER responsive (as it uses webbased API right now), this may be a good solution to keep all in openhab with Keen vents? I don’t know if the binding will work, but i think if Wink knows about it, then it should work with openhab since the binding just finds items on the WinkAPI. Perhaps worth exploring.

@waspie That is very intriguing. Do you have this working? I’m very interested in learning more about what you’ve done in this solution. What vents are you adjusting with this setup?

@CZMCall911 Thanks for that info. Yeah, if a wink hub could communicate with vents and then openhab could communicate with the wink hub using a bining, that would be great to cut out the SmartThings dependency I’m using. It looks like Keen Home doesn’t have an “official integration” but will work with it as a zigbee light bulb (http://help.keenhome.io/3rd-party-integrations/connect-smart-vents-to-wink).

I was just telling my wife yesterday that I’m kind of over the Keen Home vents… They seem to just stop responding occasionally and it may or may not start working again by removing the battery compartment and reseating it. Keen Home has been good about replacing my multiple vents that simply wouldn’t work no matter what. That did take a while to do that as it seems there customer service has been overloaded at times over the past few years, but it eventually happened. However, when you have 10ish smart vents, each vent stopping occasionally becomes way more frustration than I want any smart system to be. I love the functionality, but I’m interested in a more reliable option. I’m not aware of any commercial offerings that are better (I haven’t researched though), but an easy DIY solution would be something I would like as well.

@jonnydev13
Yeah, for nearing 18 months now. I used to have a controller at each vent but I began “home running” wires from the vents back to 1 of two central locations. Now I have two controllers handling most of the vents in the house. I also created a custom board to handle that and other features (dual ultrasonic sensor for garage bay occupancy, lots of voltage dividers to detect garage door reed switch position, door contacts, tl2561 lux sensor etc).

There’s a 5 board minimum so I have a few spare if anyone wants to buy one for a few bucks. 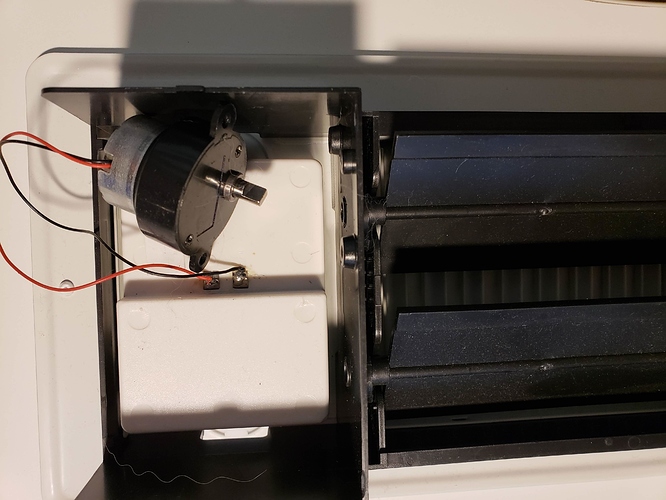 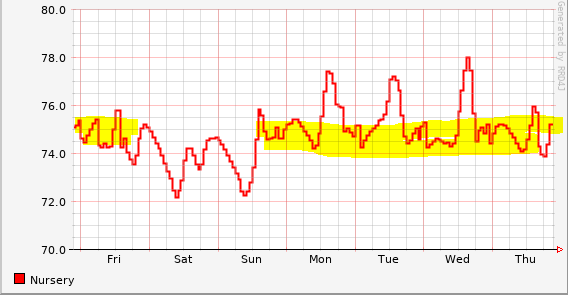 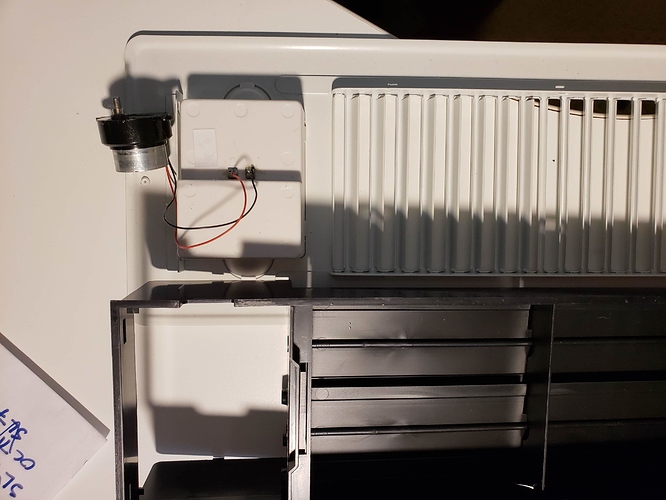 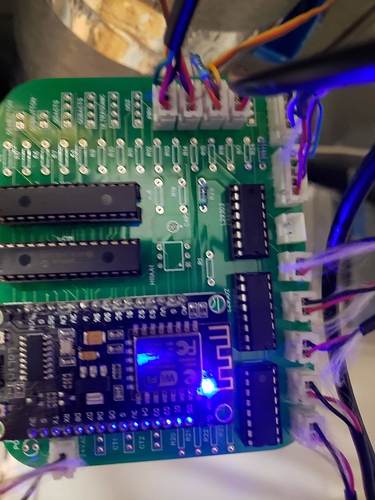 @waspie, very cool! Do you have a link to that vent? Was there anything special about the particular vent you chose? Is it basically just using a servo to open or close it?

Anyone still looking for commercially produced smart vents, I just ran across a new one today made by flair.co. It’s nice to see more competitors entering the market. That’s good for consumers.

Just search eBay for vent miser. No servo, use the built in motor. A wemos d1 mini with a dual h bridge motor controller shield will work just perfect. Or if you’re handy you can make up your own stuff similar to mine.

I just saw that flair vent morning, surprisingly they’re not terribly expensive. I have no idea if you’d have the kind of control over it like you can control an Arduino with openhab but neat nonetheless.

Thanks for the quick response. I thought I had reviewed the whole thread before sending my message a few days ago, but I guess I didn’t. I see now that your first post in the thread gave a very detailed explanation of your system. I think what you put there should really help me get going on this stuff.

It’s amazing that these vent miser vents exist, as it’s pretty much exactly what I want. I generally don’t want all the “smarts” that these companies put in their vents. I want a simple motorized vent that I can make my own logic for. These vents sound perfect. I’ve made some mysensors.org sensors in the past, so I’m definitely comfortable with arduinos. I’ve also just been reading up on sonoff tasmota. I think I may try to determine if there’s a sonoff module that would work for this situation and go that route if there is. Seems like it would be path of least resistance if I do decide to replace my keen vents.

I don’t think there are any sonoff modules that have any ease of adding motor drivers. I’m not terribly familiar with tasmota beyond out of box control of sonoffs {which I have a dozen of or so). I use espeasy on my wemos/esp8266 units.