Not really sure where to start with this. It started about 2 months ago maybe that when I would ask Google Assistant to turn on “Living Room” it started doing crazy things like turning things on an doff a few times and not setting the correct state once done. At that point I noticed it was telling me it was turning on 11 things. Well I never had/have 11 things in “Living Room” before so I log into the app and don’t see 11 things.

I delete my openhab connection, delete my “home” from G. Home app and start fresh. Everything deletes fine and re-adds fine… but even without creating any groups or anything it still responds funny although this time it’s just “9 things”

This is not the expected behavior at all and I"m unsure how to troubleshoot if this is on my end, on myopenhabs end or googles end. If I had to guess Google changed something in Home and now myopenhab is broken in some way? Also re-connecting to myopenhab always errors out but does show the switches after wards. I never had issues connecting/linking via G. Home before.

Does anyone have similar issues?

If I talk to Google Assistant and it is open on my phone, when it says turning on “9 things” a Group called “All Lights” does pop up on my phone with 9 things in it… but I cannot see that group if I minimize/dismiss it so it’s as if Google decided to make that group on it’s own with whatever it considered a light? 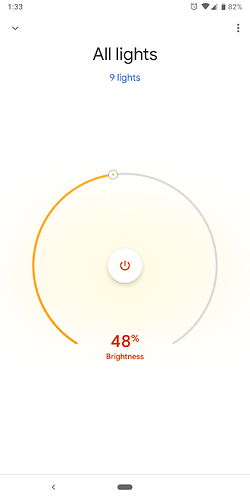 Quite frustrating that I can no longer use voice control at all in this state.

it’s as if Google decided to make that group on it’s own with whatever it considered a light?

it’s as if Google decided to make that group on it’s own with whatever it considered a light?

Then I am curious, how would I organize it to just turn off the Living room items that I choose? Obviously putting the items in their respective rooms in the Home app isn’t enough because it decides what to do on it’s own. Or could it be that the issue is with the global Living Room On/Off Switchable item that I have? Never used to be an issue before but maybe now it is?

Yes it was, at least it’s alway been that way for me and I have been using it sppradicaly for almost a year now

Then I am curious, how would I organize it to just turn off the Living room items that I choose?

Yes it was, at least it’s alway been that way for me and I have been using it sppradicaly for almost a year now

I’ve been using google home to control OH2 for about a year or just over as well… never had any of these issues and my configuration hasn’t changed. These issues only showed up about 2 months ago.

Saying ok google turn off the living room lights used to work just fine. Then it started to turn them on and off and there are more “things” in the living room than before all on it’s own. And now no matter what even if I add 4 things to “living room” it has 9 things in it when I ask google to turn it on or off.

Well I’m not sure that would do much. They’re not really going to support OH on Home. Also if you say you’re not having issues the issue could be a config issue on my/OH’s end. If Google changed something where my config has to be more specific or different then that is what I am trying to find out.

Do you know if there is a way to troubleshoot myopenhab’s connection to Google Home?

I haven’t been able to see anything in the log viewer for it?

Also API access seems to stall when connecting myopenhab to Google Home… that also never happened before. Even though it stalls it seems to link devices sometimes. Maybe it’s worthwhile to remove the myopenhab plugin from my OH2 instance and start fresh. Will try a few things and report back.

They’re not really going to support OH on Home.

It’s not OH, it’s the assistant making up groups

Well not sure what it was, but I removed the OH cloud instance completely, then I re-added it and set it up from scratch, selecting the devices, etc.

It seems to work again… not sure what caused the issue in the first place since I didn’t change anything in my config that would have affected it.

Oddly enough things are still showing up in Google Home app that I didn’t even include in the cloud config of OH2 so something strange is still going on but for now things are working as intended so I guess I can work with that.

Just wanted to update in case someone else had similar issues.

Good to know thank you!