Group members are not shown in model

I have the equipment “Büro Klima” with group members: 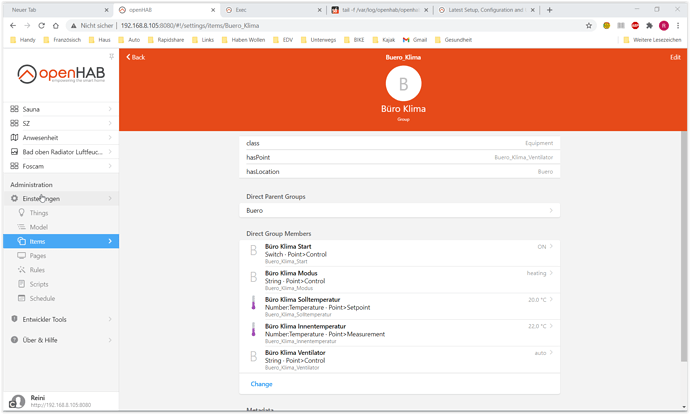 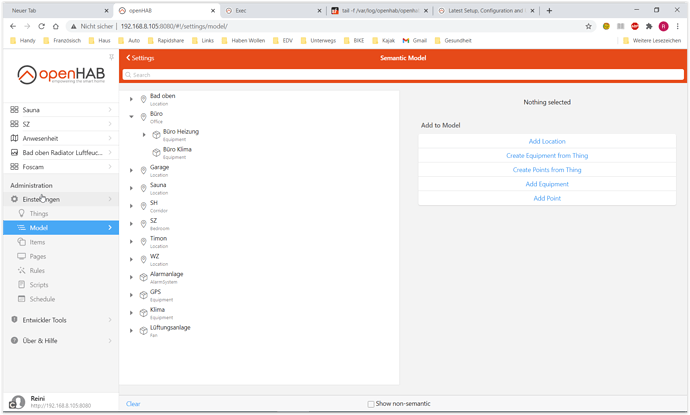 Are they part of another equipment?
I think points can be member of only one group in the model itself. Correct me if I am wrong.

Unfortunately this seam to be right. From my point of view a big disadvantage.

The model is designed to represent the physical layout of your home automation. A light switch cannot be part of two physically distinct pieces of Equipment. A temperature sensor cannot be in two different Locations at the same time. So the model does not allow that.

If you need to have functional or vertical groups (e.g. all the lights in the house) create a Group outside of the model. You do not need to, and in fact should not try to put all your Items and Groups into the model.

Normally you are right, but why restrict possibilities. For me it makes sense for example to add a humidity sensor to the heating equipment and the artificial ventilation equipment. Presence items could belong to the alarm equipment as well as to the temperature control of a room. So I would like to add these items to the heating equipment of the location and the alarm equipment. I can’t see an advantage of the restriction. My model exists of physical locations an equipments with overlapping items.

Normally you are right, but why restrict possibilities.

Because that’s the only way that ontologies work. If you don’t restrict it you destroy the computer’s ability to reason based on the model. Remember, the model isn’t really there for your benefit. It’s there for the computer’s benefit. It was originally created to enable HABot to allow natural language interaction with your automation (e.g. “turn off all the lights in the living room”). If stuff is allowed to appear more than once in the model loops occur.

For me it makes sense for example to add a humidity sensor to the heating equipment and the artificial ventilation equipment.

The same goes with presence. That can be a Property on the alarm, on the root location for the home, contained in it’s own presence Equipment. But it can’t be in all of those at once.

When a item is only allowed in one location why can I add it to different locations, altough its afterward only shown in one?

Because there is no way implemented to prevent that yet.

Your work around won’t lead to a loop because you are using separate Items. But it is going to cause certain things that use the model to have to do extra work and not work as expected. For example, that one humidity sensor is going to show up twice in the Properties tab humidity card. On the locations card it’ll be doing some unnecessary calculations to populate the badge as the badge is the average of all the Humidity tagged Items. Obviously since it’s the same value the average will work out, but it will still run the calculation.

Ultimately, the base assumption of the model is that it represents the physical layout of your devices. Physically, a single Point can’t be in two places at once nor can it physically be a part of two different equipment. You can still represent your home automation in other ways, for example in a functional hierarchy as opposed to a physical hierarchy, you just need to do it outside the model. So any work arounds you deploy in an attempt to use the model to represent things that are physically impossible will likely lead to unexpected side effects.

Frankly, at this point, unless you are using HABot or the Overview Pages of MainUI, the Model doesn’t do much for you. If you are not using those I wouldn’t spend much time trying to build a model. However, if you are using those, you must stick to the base assumptions of the model or you will have unexpected and undesirable behaviors.