Have I missed the point on Groups, I thought they were supposed to to be Hierarchical?

I have setup the following in my items:

When I run a rule with

in it, the Living Room and the Kitchen lights come on as well?

Your config make gall_lights a member off gofficelights, so your sendCommand is correctly switching the kitchen lights.

Oh, I assumed that as it was Hierarchical as described in the docs, it would work top down.
Can it be changed with the aggregation function, or is that only for status?

it would work top down

You probably meant to make it the other way round.
You tell your Items (including Group types) which groups to be members of.
(Not tell your Groups what they have for members)

aggregation function, or is that only for status?

Yes, only for status.

You probably meant to make it the other way round.

Of course, as in the same syntax as adding an item in to a group, makes sense now.
Any chance of explaining that in the docs for others not to fall in the same trap?

It’s right there in the example

There is a LOT to pick up when setting out with openHAB, but when you get the inevitable unexpected snags it’s worth reviewing the docs and examples (including in these forums) for misunderstandings.

Maybe we could add something visual to that part of the article. 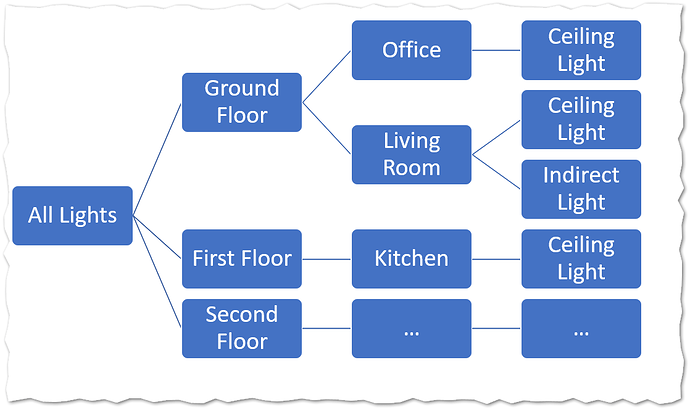 We could then fill this with some more openHAB related informations like example item definitions aside of this example house structure.

Maybe someone is interested in providing something with draw.io

I think for me, this Example needs to be expanded to look like this: