Hmmm - I don’t think that will be easy - there are hundreds of files so I’m not sure how you would compare them.

Hmmm, some version/build-logfile could do the trick there. Only need to compare that file in that case? I’m new to openHAB so it might be dumb ideas I provide you with.

For user experience though, the “Unkown Device” thing in Habmin could be handled better. Perhaps some help function that explains the usual ways to resolve the problem just like you did for me.

But if you can’t upgrade the versions without a complete reinstall of the runtime, then comparing the versions is of little use (IMHO). Most people won’t know what a version compare means - you could look at the changes on GH, but mostly they are too verbose to be of use.

For user experience though, the “Unkown Device” thing in Habmin could be handled better.

I’m open to ideas, but I’m not sure how else it can be presented? The manual could do with some additions, but I don’t know how this can be added into the UI? If you have some concrete ideas though, I’m happy to look at them.

My first thought was adding a “?”-icon by the text “Unknown device” in the things-list. But on the other hand, you could always add a help section in the right panel for each item that only is shown if some sort of problem has occured with the thing. Doesn’t have to be the worlds most complicated function, just showing a part of the documentation that might help solve the problem would atleast help me solve the problem much faster than searching the web. 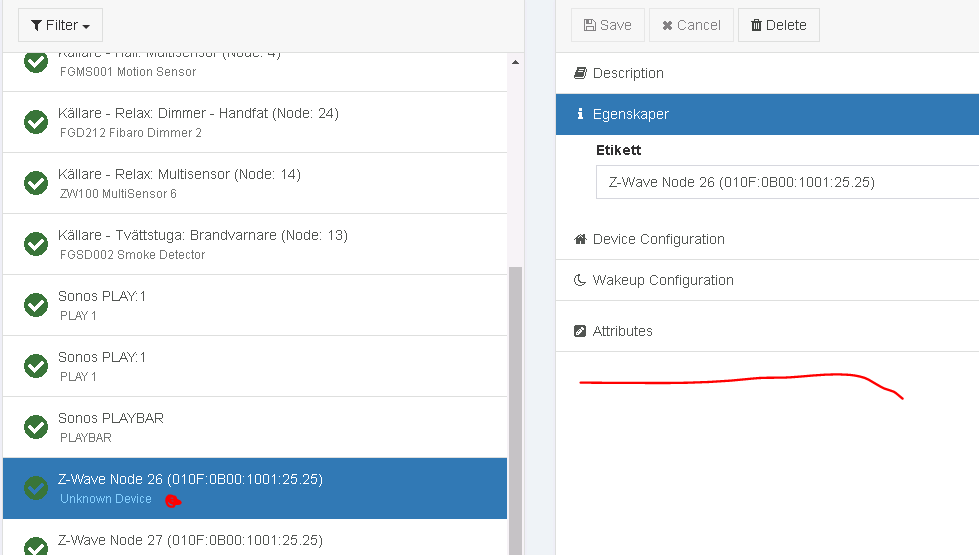 Flood sensors showed up correctly now. Thanks for all your help!

This latest snapshot btw, do you recall any fixes with the Aeotec Multisensor 6 perhaps? I’m having problems adding association groups etc… Perhaps it mights solve things to take them down and reset and install them again?

Things doesn’t look quite right compared to other things as you might see in the picture.

Edit: I might also mention these things has always been like this, it’s not because of the recent update. But maybe the last update resolves my problems with them if I remove them and add them again?

I don’t remember all the changes from beta 3 - there have certainly been updates to this sort of thing so it’s quite possible it’s fixed.

This will make sure you have the latest definition and everything gets updated (hopefully ;)).

I hope it’s ok to revive this topic.

I bought 2 devices, which are shown as unknown devices:

Is there any possibility those devices can be interated into the binding?

Thanks in Advance
Sven

Is there any possibility those devices can be interated into the binding?

Hi Sven,
Please see here on information to add devices to the database.

Thank you for your answer. I’d love to add those devices to the database. How do I find out about the device’s parameters? I’ve never done such a thing before.

For the main device parameters, the binding generates an XML file which contains all the data needed to create the initial database entry. See the section “Creating a device from an XML file” in the instructions.

Other information such as device parameters etc need to come from the manufacturers documentation. Most manufacturers provide this so as long as the device isn’t some obscure manufacturer in China, you should be able to get hold of this.

as long as the device isn’t some obscure manufacturer in China,

That is the point. Well, I’ll try anyway. Thanks.

That is the point.

Well, there’s no alternative I’m afraid. Maybe it’s published on the alliance website (it should be if it’s a new device that’s actually compliant).

Dear community, after dozens of fails I’m calling for your help with another “unknown” Z-Wave device.
It\s HeatIt Z-Din 616 - relay six-pack. I’ve added it to the web database - here.
I’m not sure if it is created correctly as it is my first attempt, but it has been approved and according to the GitHub, it was added to the database two days ago (link).
I’ve upgraded to latest openHAB 2.5.0 snapshot and uninstalled/installed the binding, excluded/included the device many times without any success. PaperUI still reports that device as unknown. It is not listed on the PaperUI/Configuration/Bindings/ZWave/Supported Things list. HABmin shows in Attributes, that the manufacturer is 0234 “Unknown Manufacturer” but the 0234 code is correct and should be recognized as Logic Home Control. How long it takes from commit to GitHub to update available in snapshot repository?

How long it takes from commit to GitHub to update available in snapshot repository?

Normally I start a build immediately after I merge the data. However, due to the ongoing changes with the overall system (ie ESH being merged back in to OH) builds are (or were) disabled, so this was not possible.

As soon as builds are running again (and I think this might now be the case) it will be included.

The Road Ahead - Reintegrating ESH Announcements

… I’m far behind my plan, but hope to have a breakthrough soon, so that we can continue with nice new snapshot builds asap!

Oh, thank you very much Chris, for your quick reply. At least I know now, where the database update got stuck.