i am running a Z-Wave Heat-It thermostat, everything is working fine but:
in HABmin (and Paper UI) there is a channel for energy consumption.

This channel does not work for me and looking at the user manual from the device list http://www.cd-jackson.com/index.php/zwave/zwave-device-database/zwave-device-list/devicesummary/412 i don’t see anything that the device is supporting the electric meter channel.
Is this maybe a bug?

I have found this older topic: Template/default settings for z-wave device specific parameters? where some modifications to the database has been done.

Would be nice if someone else using this device could share his/her experience before i start banging my head to the keyboard trying to get the channel working.

I also got a lot of these devices. None of them reports energy consumption. I don’t think they’re designed to do so either.

Thats been a fast response

Thanks for the info

Can someone post an XML for their device - it would be nice to confirm what the device says it does ;). Once we do this we can update the database if needed.

Here is my xml, is this xml created automatically from openhab/zwave binding or is this coming from the database?

none of them is working. In paper UI it is NaN 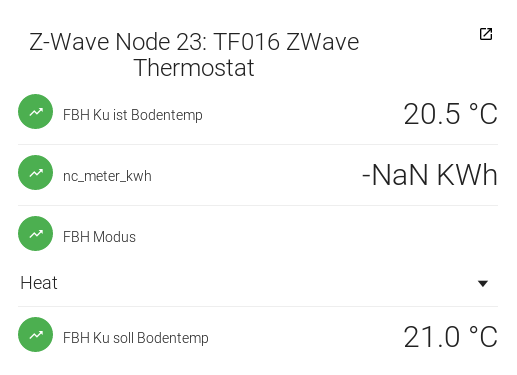 is this xml created automatically from openhab/zwave binding or is this coming from the database?

Only the kwh channel is defined in the database. According to the device (ie the XML) it supports this command class - of course it’s a different question what it does or if it works. I would personally use the logfile to see what is happening.

Set the z wave log level to debug. Can someone give me a hint what to look for (the thermostat is node 23)?

The only thing which sounds bad to me is:
NODE 23: Transaction not completed: node address inconsistent. lastSent=23, incoming=255

Thanks for putting effort in this

Thanks - it’s actually not so interesting -:

The best place to look is when the binding is restarted since at that time the binding should try to read the value of this command class. During initialisation (DYNAMIC phase) it reads all information from the device and isn’t dependant on the definition of the channels, or items. This is probably the only (or best) place to look to see what’s happening with this.

I note that the manual doesn’t mention the METER class, but since the device says it supports it, I would have expected it to respond…