I just installed the new Shelly dimmer, I turned on the MQTT function and configured a generic MQTT device and linked a number channel.

But I can’t figure out how to get the dimmer function working, I used the command: shellies/shelltafellamp/light/0/set as the website described but it doesn’t work.
The Shelly support page is: https://shelly-api-docs.shelly.cloud/?shell#shelly-dimmer-sl-mqtt

Try the search function in this topic.

Thanks for the suggestion but I can’t find the part how to solve my issue.

I don’t use the shelly binding but the MQTT function of the Shelly because I like the response time and reliability of the MQTT system.

The thing is that the dimmer of shelly are quit new so there are not a lot of good examples on the MQTT or openhab part.

Hope someone has a good idea what I could try 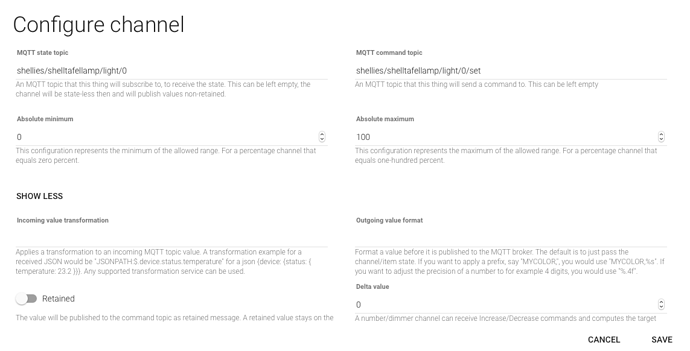 So this is the config in PaperUI at the moment, I feel like I need to fill out the transformation field but can’t figure out what the statement should be…

If I remember correct from other shelly device…you have to send the whole payload everytime.
So you need to create a rule to put together the payload and send it

Using data from from the shelly guide the important part of your rule would be:

I don’t know if you can construct the payload only with the brightness line …you could try and let us know.

edit: I edited because I realized I was using wrong data from a different part of the shelly guide, now should be ok.

Thanks, I started playing around a bit with MQTT.fx and with sending some different types of payload.

I used that payload because I saw it in a example somewhere but what does %s mean in this case?

Another question, when I put it to 0, it stays on, have to fix this?

So this is the solution

The %s represent the value of the slider.
Glad you’ve found the solution!

In this case if you put 0, only the brightness goes to zero…but the value of “turn” remains on.

To be able to turn it off I think you need to change the structure…maybe with a proxy item slider so when you slide to zero you can via rule send the payload with the “turn” to off.
With a the proxy item you’ll need to clear out all the transformation on the thing definition and send the payload using a rule like I posted above

Thanks for thinking with me, I created a really simple rule but it works

Now I still want to do more thing, I want the lights to fade in or out when I change the brightness of the lamp, after a quick search it should be possible, but I will try that some other time because it quite big rules to do that.