I pin pointed the button issue, but unable to resolve it…
It seems Openhab MQTT is not able to read topic with brackets…
Example: “hasp/plate01/state/p[1].b[1]”
Even MQTT.fx fails to receive messages. Both Openhab & MQTT.fx is able to send messages correctly.

Looks like, if this solves, the rest are pretty much ready…

@pkhajanchi - try MQTT-Explorer (I seem to be getting topic updates for buttons through it just fine).

I will wait for you to add JSON state topic. Then will do for 2.4.

It’s very strange, only Openhab and MQTT.fx is not able to read on topics with brackets[]. I tried few other tools and even tried on commandline mqtt-client tool, all are working…

I heard new MQTT2.4 is buggy. But MQTT.fx it’s strange. Same topic, it’s able to send, but nothing on receive…

@pkhajanchi - All set! I’ve added the JSON state topic to my fork of the project:

LCD touchscreen for Home Automation. Contribute to bkpsu/HASwitchPlate development by creating an account on GitHub.

You can download the .bin file and update your HASP with it to get the additional JSON topic. It will post JSON payloads to the topic when buttons are pressed and dimmers changed.

With this, I should be able to replace ALL button/dimmer state items with a single JSON MQTT item, and process the payload in a rule (with a JSONPATH) to figure out what event occurred.

Great! It’s seems to be very easy now… With very few channels and items… Most works required in rules files… I have following suggestion for making this project even better:

I’ve got the rules set up now - let me clean them up and I’ll post it all to Gothub - the latest firmware is already up, with some minor changes, including the topic name (json vs JSON)…

Great ideas! I can definitely look into implementing them (#2 would be very simple to add to the event handlers, but only useful for toggle states). I was also thinking of having a method for long-press actions (heating/volume controls for example), but I had to remove the OFF event for now (updates too fast on quick button presses and screws up my rules).

Thanks guys this is awesome work. I got It all working with little trouble. Here are some thing I learnt along the way which may help someone.

Screen not having text after boot

The screen test was not being refreshed straight after boot so in HASP-Master.rules (master stands for the room/screen)

When the 8266 loses power it sends nothing to mqtt but when it is restared it turns the plate_status to OFF then back ON again. It now works instantly.

If you get the error

You need to install JSONPath Transformation to get the data like HASP Plate 01 Sensor - ESP Version. In the PaperUI, choose Configuration -> Extensions -> Transformation (it’s the Headline) LINK

The Nextion editor is what you can use to edit the screen directly it is a very powerful little screen that you can execute code on.

Nextron also have an enhanced version of the screen which has 8 IO on-board. I was thinking of using one of those boards in each room to control some items directly so if openhab stops working or the pi dies it won’t effect the ability to be able to turn the lights off. I think I will need this to get WIFE approval.

Things I am Currently working on

Missed it until now but they use the expire binding to turn off back light.

If you install the expire1 the backlight turns of and when you press the screen it turns on and also unfortunately you also trigger the button.

When the 8266 loses power it sends nothing to mqtt but when it is restared it turns the plate_status to OFF then back ON again. It now works instantly.

Good change! I didn’t think of using the Plate_Status, and had a hard time with the rule sending that entire batch of init data to the plate constantly, so I went with something more manual (i.e. the “Refresh” switch). I’ll try your way to see if that works without the constant resends.

You need to install JSONPath Transformation to get the data

Yes - sorry for not making that obvious in the first post - I’ll update it so others don’t come across the same issue.

The Nextion editor is what you can use to edit the screen directly it is a very powerful little screen that you can execute code on.

luma has done a lot of work to make that HMI flexible and useful for many different applications. I haven’t seen the need to make any updates to the HMI layout, but you’re right, it’s very powerful. Just be aware that Nextion is basically re-branding TJC display hardware and software (half the price, more functionality on the TJC side). You can get the TJC displays cheaper on eBay, and use the firmware/HMI firmware luma made available on his GitHub, to save on the cost.

I already do this in my rules, using the expire binding. Just set the value in the expire=“30s,command=OFF” clause in the HASP_Plate02_Light_Power item definition to what you want.

The other two things you’re working on are specific to personal setups, but very cool, too! The button background color change is something @pkhajanchi also suggested, and I’ve been thinking about how to do that. The colors are currently hardcoded into rules, and Pankaj suggested I use variables at the top of the rule. But, I’d like to take that a step further, and have Color items in the main configuration, which would be used to send the background/foreground color to the HASP. The biggest issue is the HMI uses a non-standard color code (integer value between 0 and 65536), so there has to be a translation rule that will take the HSB type from the Color item, and translate it to the Nextion value).

Fortunately, the conversion has already been figured out, and there’s even a converter site on Github (https://nodtem66.github.io/nextion-hmi-color-convert/index.html) so we can use the formula in our transcoding rule.

If you install the expire1 the backlight turns of and when you press the screen it turns on and also unfortunately you also trigger the button.

Are you sure you’re running the latest firmware bin (version 0.37) I uploaded to my Github? I removed the “OFF” event from the JSON state topic, because the events were coming in too fast (and doubling up the button press rule). With the latest code, only the “ON” event is passed, so pressing the plate when turned off will bring it back up to full brightness, but won’t register as a command button press.

I downloaded and updated it again to be sure. After waiting for the time out I gave it a quick touch to wake it up and still received a touch event in the log.

I got an easy way to fix it just need to be tested.

Ah, I see what the issue is - you’re still using the original Items/Rules I posted. Last weekend, I updated the files to use the latest JSON state format, deleting all of those unnecessary “discrete” items for each button, dimmer, background color, etc…

Check out the Github contrib/openHAB folder, and download the items/rules files from there. They’ll make your configuration much simpler (and get rid of the issue you’re seeing with the backlight).

Ahh yes that’s got It thanks.

It also works good with the change

Yup - just tested it on mine and it works perfectly! Refreshes on connection and no extra refreshes after that - thanks!

I’ll update my Github repo to incorporate this improvement.

Hi. Just been playing with HASP and the latest version of the rules and firmware from this thread. Very happy so far.

Can I ask for a point in the right direction on how to process some of the incoming dimmer items?

I had a look at the example for the backlight dimmer in the rules, but need to scale the 0-254 from the slider to 0-100% before sending to a Tasmota based dimmer item.
I dont have a great deal of rules experience, so there may be much more straightforward way to approach this. See code below that seems to extract the dimmer value okay, but fails at the scaling (openhabian 2.3).

Log shows the original number being extracted okay, but then failing at the scaling line;

Can anyone give me a hint, or point in the right direction?

I think the incoming_dimmer_number value is being treated as a string in your conversion formula…try changing the rule to the following:

(I also added the “as Number” in your sendCommand routine, to ensure we send a number value to the Tasmota dimmer.

Ok so I have had some time and I have put a weather Icon on my 2nd page. 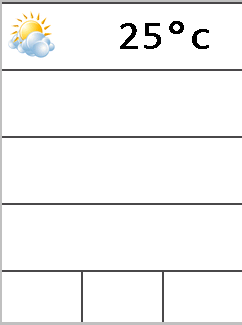 ITEMS
I added this item

Nextion Screen
you need to update the screen in the Nextion Editor or just download this one HASwichplate_weather.tf
I just updated it through the 8266 and it worked fine for me. Their is a HMI file in my github here

You can upload your own Icons but you can’t name the picture resource onto the screen. So you must map it to do this I used Map.

I used Map transformation to map the data

You need to crate a map file in your transform directory called nextionIcon.map
Contence of my map file.

The items on the left are the weather conditions and on the right is the picture to display on Nextion. If you change Icons let me know these are 50x50 but 64*64 would be better.

Next I will be putting all my aircon controls on the screen.