How I managed to controll the gate

I have a set of rules devices and items to controll a Gate. I want to show how I realized it.
So a requirement was to not make any changes to the gate. It has multiple encrypted remotes. So yeah, maybe I could have just progrmmed a pi on it or so, but for that I would have to make changes and therefore must ask my dad ^^.
So I used a construction out of Fischertechnik pneumatics and an ESP32 with a relay. So I built a holder for the remote and some pneumatics on top of that.
That is then connected to the relay which is controlled by the ESP.
On the ESP is a sketch that subscribes to a MQTT topic for the button and triggers the press of the button to control the gate. So with that we have the control part.

But there is a problem: The remote has exactly one button for three actions:

So when you are pressing it, it either opens OR closes. When you press while it moves it stops.
So I needed to know in which state the gate is.
I ended up using an ultrasonic sensor mounted on the pile of the gate. Since no WLAN is available at this position, I used an old telephone cable that was luckily going from the cellar to the gate. So then I spend an afternoon getting the cable out of the dirt and find the cable pairs.

In the cellar I now have another ESP32 reading the ultrasonic sensor.
All that was left is to create a proxy item to link them and a smart rule to position the gate with a slider.
In OH2 I was using an external python script communicating with openhab through the HTTP API.
But as I migrated OH3 (yesterday, and I actually did a clean setup, no migration) I used Jython to do it.

Here is the rule: 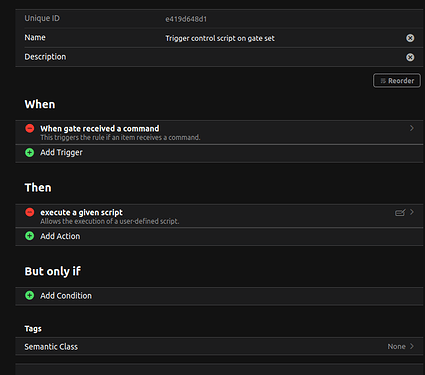 The stdout thing is just for debugging. (BTW, errors in the WebUI for python scripts or logs would be cool. Currently it all just fails silently.)

Then I have two more rules:

This one updates the label (not working with openHAB 3 UI, the label does not live update. I will create an Issue for this.) so you always know if the gate is still moving. I will later implement a lock feature in it so I don’t have the rule running twice (Or is there a better way?)

This just inverts the position from the sensor and applies it to the proxy.