IKEA Tradfri Binding: Pairing a Light without a Dimming Remote?

Hi,
I bought a Tradfri Gateway + one Tradfri dimmable LED light, but no remote. Do I really need a remote to pair the light and the gateway? I successfully added the gateway as a thing in openhab but not the dimmable light.
Thanks,
Yoshi

I went through the same process as you: I bought a Tradfri gateway + 2 bulbs from Ikea, only to find that I needed a remote in order to pair my bulbs. I then purchased the Ikea Tradfri dimming kit (1 bulb + 1 dimmer remote) so I could pair my bulbs.

It is worth noting that the Tradfri bulbs will work with the Zigbee binding, which does not require either the Tradfri gateway or a Tradfri remote.

Thanks Scott
I found a solution here: http://www.chris-wohlbrecht.de/index.php/2017/07/10/openhab-und-tradfri/ (in German).
But it does not work for me. After pressing the Connect button on the gateway, there is no bulb in my OpenHAB inbox.

I had searched for and read similar reports, but when I tried, I was unable to pair my bulbs without the remote.

How does the pairing work with the Zigbee binding and a bulb?

First of all, I have the following items I purchased from aliexpress.com:

Using the SmartRF04EB and the downloader cable, I programmed the ZigBee dongle with CC2531ZNP-Pro-Secure_LinkKeyJoin.hex. I then plugged the ZigBee Dongle into my RPi3 that is running OH2. Then I installed and configured the ZigBee Binding to use the new ZigBee dongle.

I then reset my Tradfri bulb by cycling power to the bulb six times in rapid succession. I then used HABmin to discover the bulb.

The newly discovered bulb was indicated at the upper right corner of the HABmin window. 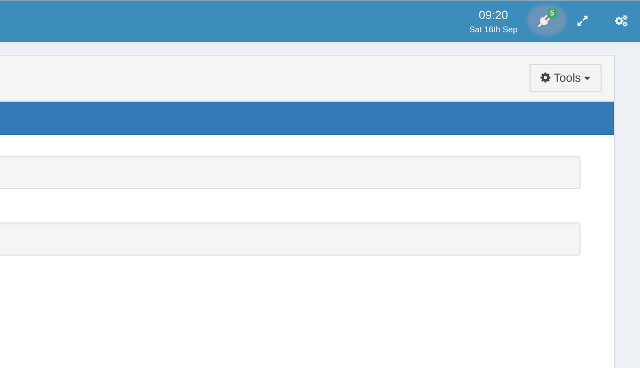 I then clicked on the New Things icon. 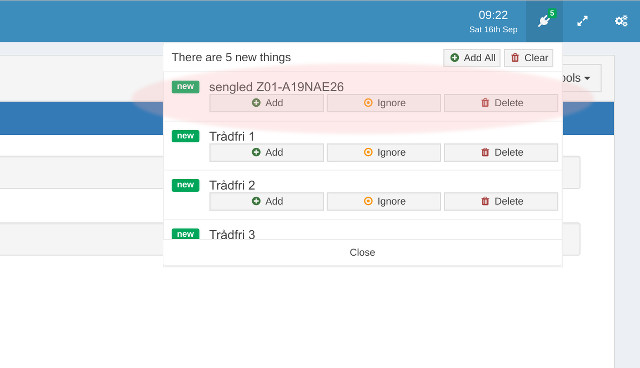 [In this case, I didn’t have a spare Tradfri bulb (the Tradfri bulbs shown in the screen capture are manually configured Tradfri Binding things), so I used a SengLED Element bulb here.] I then clicked the Add button and configured the bulb.

I recommend you read through the ZigBee binding posts.

Hope this helps and good luck!

Hope this helps and good luck!

I have the same zigbee dongle from ali, flashed it already and is added as thing controller in habmin. 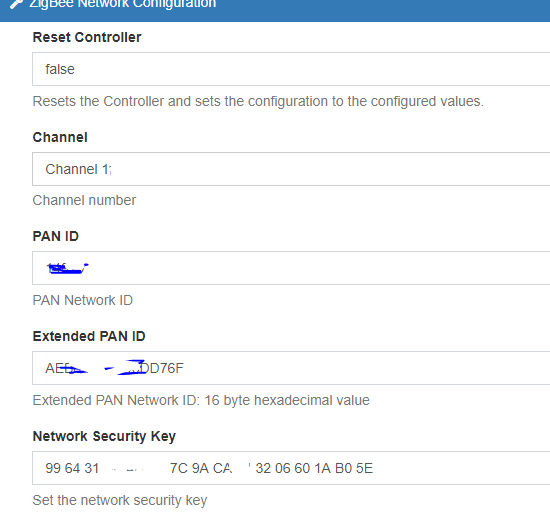 IIRC, I didn’t modify any of the configuration settings of the ZigBee coordinator.

I recently did some reading about the potential for interference between ZigBee and WiFi, so, if you haven’t already configured your ZigBee setup, you might perform a WiFi survey (I used the Wifi Analyzer app on my Note 4) to determine what Channel selection best avoids interference.

for me the approach described behind this link worked - just hold the (switched on) bulb close to the gateway and push the button on top of the gateway for about ten seconds. Neither the gateway nor the bulbs gave any feedback when connecting succeeds… but in the Android app i got direct feedback, that a new bulb has been recognized.

Worked for me too, but I believe only because I turned the power off and on (for the bulbs) several times. Hope that helps
Erik

I did the same steps as scottk described (same hardware used), but for me, neither Ikea bulb was identified nor my xiaomi temperature sensor…

I used instead the zigbee shepherd and at least the xiaomi temp sensor was imediately recognized and worked flawless.
Ikea bulb is still not recognized by zigbee shepherd. Hopefully i need to reset it to defaul, because earlier was used with conbee (using 1.2.214 firmware). I tryed 6x on/off, but didn’t helped.
I don’t have access to tradfri gateway or anything else from Ikea.

A Google search for zstack 1.2.2a turns up a link to this GitHub project, which contains CC2531ZNP-Pro-Secure_LinkKeyJoin.hex. I downloaded same and have verified that it is the same file as I used to program my CC2531. You can also try here on TI’s site. The download you want is the1.2.2a version of Z-STACK-HOME. You have to install it on Windows, then search for the firmware within the installed directories.