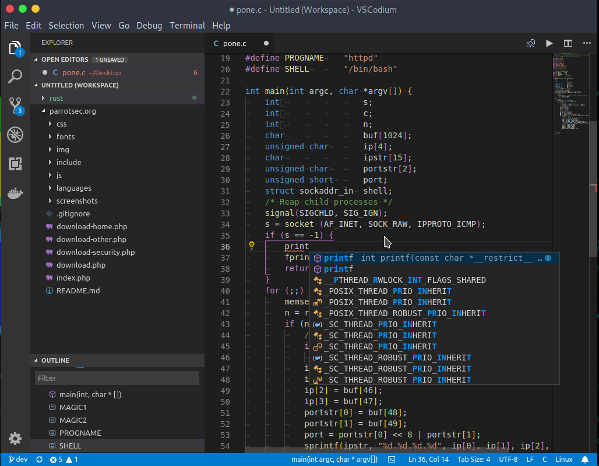 @mstormi please take a close look before next openhabian release.
Thx in advance!

That is somebody that does not have a clue and gas Visual Studio code installed and likely access the Pi using ssh mode which installs on the Pi too, even on a lite image.

Sorry! Changed the topic myself. Now it reflects more what I wanted to mention.

The thread title still looks the same to me and the answer is “No, they are not doing that. The user used Visual Studio Code themselves to do that.”

@mstormi please take a close look before next openhabian release.

Don’t ping people please. And no, we won’t start dissecting Raspi OS because of this.

A much needed reasonable take from a trusted source on this issue.

Raspberry Pi OS added a Microsoft repo. No, it’s not an evil secret

Seems like it always comes back to this quote from the Ars Technica article:

We can already hear some users grumbling that it wasn’t that hard to install VS Code the old way—and to them, we’d like to point out that the primary purpose of the Raspberry Pi foundation isn’t to provide advanced users with cheap toys, it’s to facilitate computer education by removing roadblocks.

Yes, The raspberry foundation’s aim is to make education and development as easy as possible for people. VS code despite your feelings on Microsoft or none commercial software is a great tool for encouraging the development and education of all software technologies and languages. Nothing “secret” about including the repos. Ubuntu didn’t “secretly” include the AMD and Nvidia repos to bow to some corporate overload either, it was done to more easily support the desires of what many users wanted and needed. Let us also be honest, any person or company that is so paranoid about what their linux distribution contains isn’t going to be using the default OS aimed at the mass education market anyways.

I use VS Code including by ssh on Linux but I know what is happening.

Too many people here & elsewhere expect Linux “quick fixes” without learning the OS and its components.

But people with little or no coding/Linux need those quick fixes to get started. A fresh user opening up the box, installing it, and starting down their first “hello world” tutorial wants and needs those quick fixes. If they are blocked by a 2+ hour rabbit hole just getting started, they are going to throw it in the junk drawer defeated having been frustrated this early.

I’m no fan boy, be it Microsoft, Apple, Linux, Etc. I can get excited about things and talk for hours on them. Years ago (decades) I was very much an open source snob, anything not open was for lack of a nice term, “shit”. But as I’ve grown and learned and I’m now pretty much in the “Use what works best for you” category. I don’t really care for Apple practices, but I love my MacBook Pro as it works best for what I do every day. I don’t love everything that comes out of Microsoft, But VS Code is a damn nice and dare I say sexy cross platform IDE. Microsoft used to fight Open source tooth and nail, They now support and contribute, no they arn’t perfect but change is still change.

People need to spend more time finding what works best for them, drop stigmas, use the tools available to learn, create and thrive. Spend less time fighting for the sake of fighting. I use Linux, BSD, Windows, OSX, and other all the time, There are things I love and hate about each and every one, but think of the world if there were no choices, the competition drives so many innovations and changes.

For the record I’m not putting down anybody, just asking people to understand why some of these choices have been made, the answer is almost never “the company wants to be evil and screw people”, yes often profits dictate decisions, but remember a non-profitable company, no matter how much of a positive impact a company has on it’s community will ultimately fail and fade from existence. Profit != Evil.

And Microsoft lines of open source code are not only there so you might want to stop using some other things if you find Microsoft so distasteful.

Possibly you use chrome? Well guess what it will have bits written by Microsoft paid engineers in it

Google Chrome users: You can thank Microsoft for this new feature | ZDNet.

will it be good for all of us in the end who knows and if it works and does not infringe the law who cares?