FYI, ITead just released a new “ZBDongle-E” adapter as an improved of their old ITead’s previous barebone Silabs EFR32MG21 adapter and it is to be side-by-side as an alternative to ITead’s TI CC2652P based “Sonoff Zigbee 3.0 USB Dongle Plus” (which is now renamed to “ZBDongle-P”), meaning they will continuously sell both variants, and while both type of SoC chips they are based in practically have the same specifications on paper it is worth noting before buying that they use different Zigbee stack firmware which will affect compatibility/support with different Zigbee gateway application implementations. 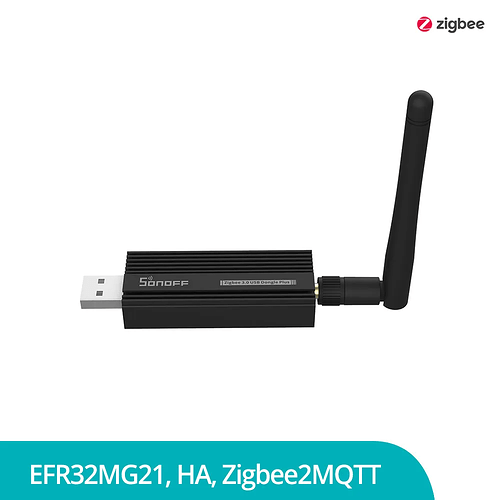 Both can act as either a Zigbee Coordinator (by default) or Zigbee Router device (if flashed with such firmware instead), and if flash OpenThread/Spinel Radio Co-Processor (RCP) firmware also Thread network protocol for the upcoming Matter/CHIP standard (Project Connected Home over IP). As Silicon Lab and Texas Instruments adapters offer different compatibility ITead will now sell both of these so users will now have more options as different DIY home automation software applications offer might not be fully compatible with one or the other, (openHAB’s ZigBee Binding is for example currently not compatible with CC2652/CC1352 which uses the newer Z-Stack v3), otherwise based in just the specification they should in theory offer similar performance on paper).

This new Silabs based dongle also targets users of multiple open-source home automation software applications so it comes pre-flashed with a firmware known to be stable and compatible with several popular DIY projects. Physically the dongle features the same external antenna + metal-enclosure too as ITead’s TI based dongle does, as well as shipping in similar retail packaging to make it more attractive for sale in brick and mortar stores.

Both their Silicon Labs and Texas Instruments adapters are compatible out-of-the-box with OpenHAB’s ZigBee Binding which supports Silabs EZSP (EmberZNet Serial Protocol) but only an older version of TI Z-Stack Serial Interface as well as a few other manufacturers Zigbee adapters serial protocols, so different benefits are that the same Silicon Labs EFR32MG21 based adapter is also used by Home Assistant SkyConnect USB Stick (as well as ITead’s Sonoff ZBBridge and ZB-GW03 eWeLink Ethernet Zigbee Gateway which with Zigbee Coordinator NCP firmware they are compatible with Home Assistant’s ZHA integration, Zigbee Plugin for Domoticz, and Zigbee Plugin for Jeedom, while the Texas Instruments CC2652P based adapter is also fully compatible with Zigbee2MQTT (a.k.a. Z2M) and IoBroker while their zigbee-herdsman library currently only has experimental support for Silicon Labs based adapters.

Again, both variants still look to be great value for premium hardware that is sold for a low price.

As both are sold at a lower price it is assumed ITead hope to make money on attach rate sales, so if you are new to Zigbee also recommend to buy some of their other Sonoff branded Zigbee devices as well:

Also, I can personally recommend using a few of their USB adapters flashed as Zigbee Routers too. 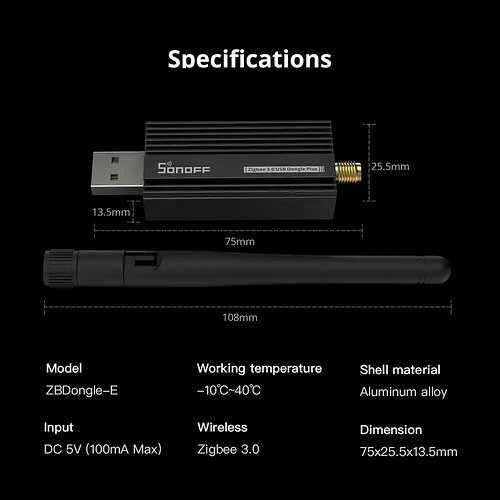 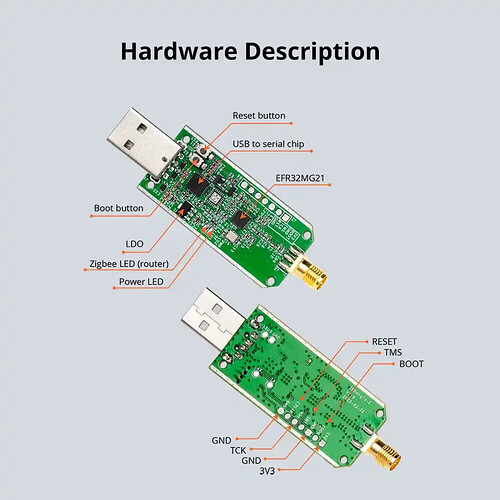 If someone here is feeling a little brave and in the mood to experiment with newer firmware untested by ITead then you have the option to try flashing one of the unofficial alternative EmberZNet Zigbee firmware images for EFR32MG21 from independent community firmware developers as those should at least on paper also be compatible with ITead’s “ZBDongle-E” (and already have features such as touchlink/touchlinking enabled which ITead has missed enabling), but they might have not yet have specifically tested on ITead’s “ZBDongle-E” hardware or with all Zigbee applications. See for example this related discussion about ZBDongle-E firmware compatibility here:

Be aware that the CC2652P based “ZBBridge-P” (a.k.a. “Dongle-P”/“Dongle-P”) as well the old firmware for the previous/older EFR32MG21 based ITead Zigbee 3.0 USB Dongle Model: 9888010100045 (Hardware Revision Version 1.3) is also linked to by ITead on same of those pages, and those might do not use the same firmware (at least not the ones for Texas Instruments CC2652 based products like the “ZBBridge-P”).

Elelabs EZSP Firmware Upgrade Utility can be used to flash the firmware to a newer or older version:

This firmware upgrade tool has also been packaged by walthowd in a docker image to make it easier:

FYI! Basically the serial protocol API for EmberZNet Zigbee coordinator application running on the Silicon Labs SoC/MCU does not deal well with unexpected loss of communication caused by network drops. The reason Ember remote bridges over serial-to-IP proxy server is not recommended is that clients using the EZSP serial protocol requires a robust connection between the EmberZNet Zigbee stack running on EFR32 MCU and the serial port of the Zigbee radio. With solutions such as ITEAD Sonoff ZBBridge or a Ser2Net serial proxy connection over a WiFi network it is expected to see NCP entered failed state. Requesting APP controller restart in the logs. This is a normal part of the operation and indicates there was a drop in communication which caused packet loss to occurred between the zigpy radio library and the Zigbee radio. The use of serial network proxies/bridges/servers over WiFi is therefore not recommended when wanting a stable Zigbee environment with Silicon Labs Ember based Zigbee radios. The developers of the bellows radio library for the zigpy project has more information about this if needed.

Here is by the way link to FCC filing/report for the new “ZBDongle-E” (a.k.a. “ZBD-E” ) adapter which contains copy of the user manual + a lot more detailed + many more internal and external pictures:

FYI, I asked ITead was got the reply that the pinout definition for the EFR32MG21 SoC chip on the new model ZBDongle-E board is the same as the original first-generation barebone Zigbee 3.0 USB Dongle model 9888010100045, but they answered that the new model ZBDongle-E adapter can still not use the exact same firmware images as their old barebone model 9888010100045 adapter, so I guess that must mean that they do not use the exact same EFR32MG21 SoC chip model or?

I also asked ITead about the default RF output power configuration and was told that the new ZBDongle-E adapter currently ships with Zigbee NCP 6.10.3 firmware that has enabled 20 dBm output RF power default, however is not hardcoded in the firmware so users/applications can choose to lower output RF power if they want.

It does not mention “Child Table Size” but I guess that is probably configured to 32 same as for old model 9888010100045 as per zigbeeFirmware/README.md at master · xsp1989/zigbeeFirmware · GitHub or?

PS: The “ZBDongle-E” USB “product description id” has also “SONOFF Zigbee 3.0 USB Dongle Plus V2” written to EEPROM of WCH CH9102F USB-to-UART bridge on the board to enable auto-discovered of the USB-adapter for ZHA integration in Home Assistant.

FYI, the developers Zigbee2MQTT, the popular stand-alone Zigbee to MQTT bridge application (together with developers of IoBroker as both are based on zigbee-herdsman open-source library) are currently planning to soon remove the “experimental” tag from Silicon Labs EFR32-based Zigbee adapters on their “Supported Adapters List” and working to instead list them as “Recommended” and “stable” for everyday use just like Texas Instruments CC2652 based adapters are today.

So if you want to help out the Zigbee2MQTT and IoBroker (both based on zigbee-herdsman) developers then please consider testing Silabs EFR32 based adapters with those applications. See discussions: