Hi KNX Friends! After some really great success with the KNX Binding I have everything in my KNX system replicated in my OH system - and I’m even ditching Gira Home Server!

My next venture is to introduce automated window blinds. I’m really struggling though to find something suitable that will work with my KNX system AND be controlled via openHAB - actually, I really mean ‘or’ as I would be happy with a robust solution outside of KNX - as I know that’s an expensive option.

Here in the UK there are very few automated roller blind installers - seems to be much more common in Europe, especially Germany and NL. So really there is nobody to give me good advice over here! plus i fancy a new project

I have already tried Zigbee/Tuya motors with some samples from Zemismart. Although, I’m finding real issue with having a Zigbee network with all my other networking going on - am sure it’s clashing. I think a wired solution might be more reliable - I asked the family if when they press the button would they want:

They went with option (a) !

Anybody got good experience of getting blind motors working well with Openhab - which ones do you recommend?

Hi Pete,
I would stick with KNX if possible and not mixing too much systems. From what I understood from your post you have KNX already.
A KNX shutter driver doesn’t cost that much. 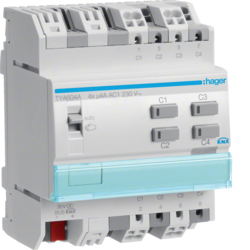 You’ve confirmed my thinking that KNX is really the way to go. So i could use the switch you shared, but I’ve got 8 blinds to control and the suggestion has been to use a KNX/SMI switch - such as below

Looks like the SMI motors are much more controllable. The blinds are on the other side of the house to my KNX cabinet, but I was wise(?) enough to run the KNX control cable all around the house when we did a big referb, So i could install the KNX/SEI actuator nearer the blinds. I’m going to have to retrofit the power cable to the blinds though - but I think that can be done in parallel using the SEI cabling - so shouldn’t be too bad. Time to call the electrician!

@marco_hoefle There are some much cheaper KNX/SMI actuators on the website you sent a link from compared to the one I’ve been told aboout - will check them out! Thanks!

I installed the Rademacher X-LIM and up to now I was satisfied. Unfortunately I noticed that they stopped production for those, so in case one breaks there will be no replacement available.
Only solution would be to have a standard motor plus a separate actor.
If I had to do it again I’d go for a decentralised installation again, but separate the actor from the motor as described. This is cheaper and easier to replace in case if failure.
As an example you could use the MDT Actor, it even features dry contacts you can use for window contacts or a switch.

Thanks @Oggerschummer - the MDT actor option looks interesting. If i just go for ‘dumb’ motors that would be a cheaper option. I do like the idea of more control with the SMI option (Standard Motor Interface). It’s not something I knew about until last week - supposed to be a standard that all motor manufacturers can sign up to. There seems to be plenty of KNX-SMI actuators about - down-side is that there don’t seem to be many motors about - so much for these standards sometimes eh?

I need 8 motors, so cost is a factor. Looking for < 100euros each. I could get some motors from china for 40-50euros and go the dumb motor option! I’ve actually tried some Zigbee motors from China - i was actually really impressed with the quality of the motor build. It was for another area where I couldn’t get KNX or power to the window - so was trying Zigbee and battery powered motors.

Not right for my main area, but was good for a bedroom as a ‘test case’

@Oggerschummer @PeteW there are for sure cheaper solutions around. I had some actors other than Hager in our private house and after 5 years a heating actor broke.
From another vendor I had a DALI GW, also broke but at least in warranty time.
This is something you don’t want.

In the meanwhile I started a business for KNX and Smarthome programming here in Switzerland and I did also participate on a KNX course to be listed on the KNX site. The course was held by someone from Sonepar which is a large distributor in Germany. I asked him with which vendor do you have the least RMA issues. He mentioned that Hager builds robust actors without blaming other vendors…

Hager sounds worth considering then. I’ve had Gira and ABB KNX switches/actuators for about 10 years now with no issues - although I also had a Gira Home server that ‘blew up’ lSt month when we had a power cut! I’ve decided not to replace it and use OpenHAB now - much more flexible, integrated with other system as and cheap too! Although not cheap in my time

But it’s fun too and I learn a lot

There is not so much about roller shutters or blinds, to be honest.
It’s a motor to drive forwards and backwards. The motor has to check whether there are obstacles or mechanical issues. But that’s it. So, the actuator has to control only direction and duration.
Setup the actuator is: measuring time for a complete open to closed and the other direction, too, as the motor has to work harder when going upwards. these two durations are stored in the actuator, individually per channel. If using venetian blinds, as an extra there is the time to turn the lamella (is this correct?).
openHAB commands 0 to 100 and UP/DOWN/STOP. For the angle you will need another channel.

Of course, there are some roller shutter motors with direct knx connection such as RolloTube X-line from Rademacher, but these are really expensive. The only benefit is always real position, as it’s detected within the motor. Well, you won’t need any additional actuator, it’s integrated in the motor.

but on the other hand, you will need the knx bus right to the shutter casing.

thanks @Udo_Hartmann So do you think going down the SMI route is overkill? If I can use a simpler KNX basic switch actuator and just calculate the duration for up and down, I should get pretty accurate positioning via openHAB %age commands. Also, I guess if I am measuring how far blind is open with time, then having these mains powered is important. I looked at battery ones, but I think once the battery starts to go the timing of opening and closing will change - or is my electricity knowledge not quite right there

I do have the KNX control cable all the way to the windows, but I agree that going the RolloTube X-line route is very expensive!

If I can use a simpler KNX basic switch actuator and just calculate the duration for up and down, I should get pretty accurate

I have GIRA blind actuators, and I’m able to send “44%” to both the blinds and the slats GAs and the actuator will do its magic to position them (you have to stop the time for the blinds to do that and put that into the ETS for that actuator).

But you could also just use up-down commands and tell openHAB “44%” and you then have to write a rule for that in openHAB. Depends on how much time you want to spend with your hobby - or how much money you want to spend on hardware!

If I can use a simpler KNX basic switch actuator and just calculate the duration for up and down, I should get pretty accurate

Jepp. If using a decent shutter actuator, you only have to configure the duration in the actuator channel, then send e.g. 44% and the shutter goes straight to 44%, whether it is open or closed or between these positions. If it’s already in position 44%, it won’t move at all.
As there is no real measurement of the distance but only travel time, there are some inaccuracies. but making an “open all the way up” once a day will calibrate the blinds automatically.
Please be aware that 50% is not the middle position in most cases for mechanical reasons.

As said above those RolloTube X-Line devices are no longer in production, Rademacher doesn’t list them on their website anymore. Have not seen a direct replacement from different vendors yet.
Despite the price tag I liked them and as each room had knx cable in the ceiling or wall I saved the effort for pulling separate power cords.
But agreed, a simple motor + knx actor is good enough and you do not have to replace both if either actor or motor breaks.

each room had knx cable in the ceiling or wall I saved the effort for pulling separate power cords.

@Oggerschummer Thomas - I assume that you still needed to power each motor for it to work right? The KNX control wire just does the KNX telegrams? I too have the KNX cabling in, but am lacking in power to the windows to power the blind itself. I’ll have to get an electrician in to wire that up i think.

Yes, you need mains power there. The advantage is, that you can take it from anywhere in the room and do not meed to have cables running from e.g. the cellar through the whole house.
Would never go for a battery solution - charging many motors one by one is a nightmare. And considering we are getting older there will be a point in time where I may not be able to do this anymore…
I’d suggest you give it a try at one of the windows where power is easily accessible and decide if a motor + separate knx actor is good enough.

I assume that you still needed to power each motor for it to work right? The KNX control wire just does the KNX telegrams?

just to make it clear: all KNX devices must be powered externally, not by the bus. (there is of course some exceptions, for DC low voltage devices you could use the two power cables in the bus cables, but there’s very little use cases for that). The KNX bus cable is not even remotely meant for powering motors or other consumption heavy stuff. And yes, the KNX wires “only” send/receive the telegrams and the actuators are powered by the electric cables (normally 230V).

In your use case,

=> so, if you send a KNX command to a GA, the actuator gets it, interprets it and moves the motor of the blinds accordingly.

Yes, you need mains power there. The advantage is, that you can take it from anywhere in the room and do not meed to have cables running from e.g. the cellar through the whole house.

For this I have my doubts, are there any blind motors with integrated actutators? - except the discontinued RolloTube?

No integrated ones of which I know, thus I meant I would now go for motors plus decentralized knx actor.

the KNX blinds actuator usually sits in the central distribution box and the 230V cables run from there to the motor at the windows.

Unfortunately I can’t do this - As I’d have to run 8xPower cables from the blinds back to the central distribution box - that’s going to be impossible in my case - it’s quite a long way, and I can’t get access under floorboards etc. My thoughts are to put the KNX actuator nearer the blinds in a separate cabinet. Then power it and the blinds themselves from a local power 240v power source. I do have the KNX control cable going out to the area where the blinds are, so I can easily connect the blind actuator to the KNX bus. I think that will work?