I’m creating plans for building a game table in which I want to have recessed LED lighting around the playing area. Specifically, I want to be able to dynamically control the LED lighting in 8 segments. One segment for each “seat” around the table.

I mainly have Philips Hue light bulbs throughout my home and assumed their light strips would be able to serve my purpose (though expensively); however, it looks like 1 strip can only ever be 1 segment and cannot be partitioned. This would require me to purchase eight strips for roughly a 2 foot segment each (stupid expensive and wasteful since each strip is around 6 feet long).

Looking around at other LED strips, it seems this is a common function. One LED controller tied to one strip means I only get one segment to control.

Is there another way to accomplish what I am looking to do, without having to purchase eight LED strips, cut them down, and have eight socket plugs that I’ll have to power?

My OpenHab server operates many Z-wave devices as well. I found an Aeotec LED Z-wave strip on Amazon for $139.99 (197" or 16.4 feet), but doesn’t appear to state you can control sections of strip dynamically.

I appreciate any insight or recommendations.

You could use one LED strip and connect it to an Arduino which can cotroll each LED separately (if the strip supports sthis).

Once you know how to control the LEDs with your arduino you can connect the arduino via MQTT (over Wifi) with openhab.

For MQTT with Arduino and openhab, see: https://github.com/marvinroger/homie-esp8266

I would use an ESP8266 (or the newer ESP32) wich are Arduino compatible, cheap and have wifi.

I have not done all this steps i one project, yet.
But it should work.

Awesome. That’s just the kind of start I needed to get me going. Thanks!

I don’t know two to control it with OH, but I work in lighting so if any pros here can use my thoughts and come up with a solution then I might try it also. You can easily cut LED strips and then solder new connectors. Strip usually comes in 5m runs and has places to cut every 3cm, its pretty obvious if you look at it closely. Then you will need a controller per section. The other type of strip that might help you is called WS2812 or WS2812B, this has individually addressable chips and means you can have one controller sending the message to each with an RGB value. Wsz2812 is more expensive than regular strip but will allow you to do what you want quite well. Think a single line of TV pixels.

EDIT
Sorry just saw a pro answer with the WS2812 solution. Love to hear how it works with openhab!

How did your project turn out? I’m looking to do something similar. Do you have any code you would share?

You find my Project here.

Some time ago I started a little project for my little cousin. I call it SuperLEDstrip.

Finally, I found the time to add some documentation and publishing it on GitHub. While this is completely stand alone at the moment, I think this could be improved by adding wifi and mqtt to connect this project to openHAB. To be honest, I don’t know when or if I will do this. But feel free to comment, discuss, copy or even improve.

Fantastic project! Thanks for sharing

The project ended up working nicely. I am very happy with it!

I initially had issues with the couple of LED control libraries out their for Arduino and the LED strips. Eventually, I did find the right library that worked perfectly for my final setup:

The Arduino communicates over MQTT. In OpenHab I can control all player seats, individual LEDs, or the entire table. Additionally, I have some canned routines like a countdown that is configurable through OpenHab. So you can put X seconds on the clock and see the LEDs tick down until they all run out and the LEDs flash to indicate the expired timer.

If its helpful, I can share in detail how everything is hooked up and running, as well as example code for the Arduino configuration and OpenHab configuration.

Below are some example pictures, though they are older and from when the LED libraries were a little unstable, so some of the LEDs are not synced properly. 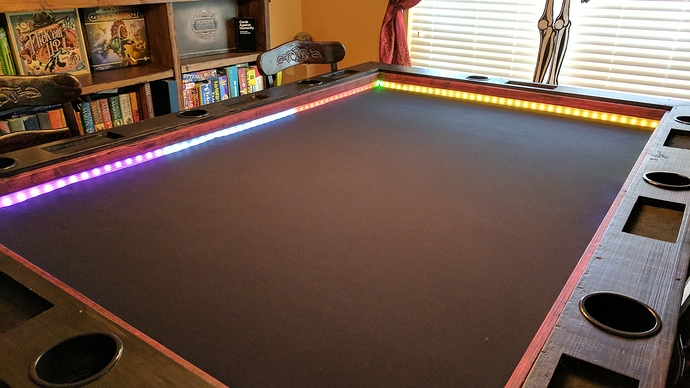 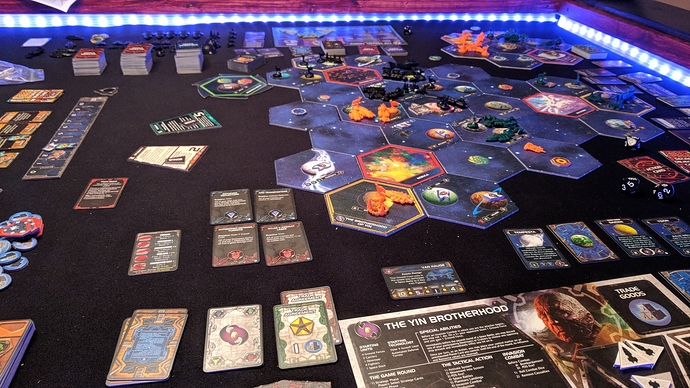 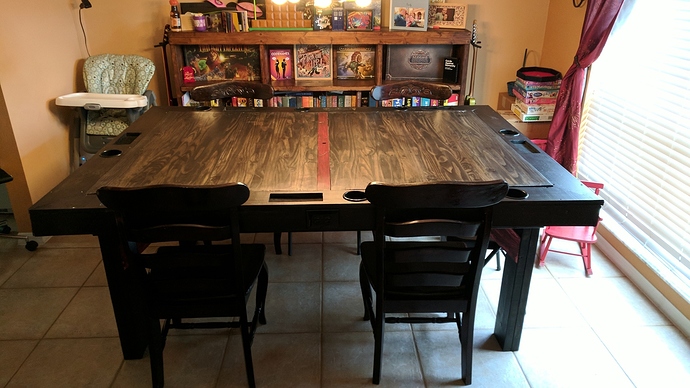 Looks great - a nice integration. Yes, please do share the libraries and code. You have a good start point for others to build from.