Recently Leviton produced a “decora smart” switch with Wi-Fi technology that is compatible with Google Home. It is hub-less and can be controlled by the “My Leviton” app. Could someone please provide a binding for this product?

There is no public API so the API would have to be reverse engineered first, assuming that it isn’t encrypted.

In Google Home I register my ID and Password for the “My Leviton” site and Google Home is then able to find all the devices on my network. So this should be possible. We just need the same access as Google Home… (??)

In Google Home I register my ID and Password for the “My Leviton” site and Google Home is then able to find all the devices on my network. So this should be possible. We just need the same access as Google Home… (??)

Google interacts with the My Leviton site through some sort of Application Programming Interface (API).

Leviton has not published any information about this API.

Therefore someone will need to reverse engineer the API or Leviton needs to publish the API before openHAB will be able to interact with these devices.

Sorry to resurrect an old thread, but the API has been reverse engineered: see https://pypi.python.org/pypi/decora-wifi/1.3 for a python implementation of the API.

I second the call for an OpenHAB binding! Am totally new to Java and OpenHAB or would offer to get started.

Any update on a binding?

Dido… any update on a binding?

I recently installed openhabianpi and so far really liking it but not having this binding is a show stopper as I already have many of these switches. Homeassistant has support for it using an API, not sure if it is the one listed here but the support is there.

Does anyone know if there are plans for support for this? I also have several of the Z-Wave Leviton switches, and it looks like some have that working with the Z-Wave bindings.

I’ve had some success using the python implementation to create an executeCommandLine script. I can’t say I’ve added much aside from figuring out how to convert the cli-test.py to operate a specific switch ID, but I’m happy to post it if anyone’s interested.

First step is to install the python library, and using it requires putting the MyLeviton email and password in the script or command line in plain text.

@r10kindsofpeople I’d love a copy of your python implementation, attached or in a repo or otherwise. Thanks!

Since we’re not getting any action on a binding, I created a solution and published it on openHAB at: Leviton Decora Wi-Fi smart switch implementation. This solution is relatively easy to implement, but does require you to download some script files from GitHub. All instructions are included in the openHAB posting. Cheers !!

@cmc, Thank you for posting this temporary solution for the Leviton Decora Smart switches!

I would like to encourage an official Leviton binding. These are one of the (only?) WiFi smart switches that support 4-way configurations.

I do have 20 wifi leviton dimmer and wish to see binding solution . . . leviton new 4 button keypad should be out soon and will be a great implement ! 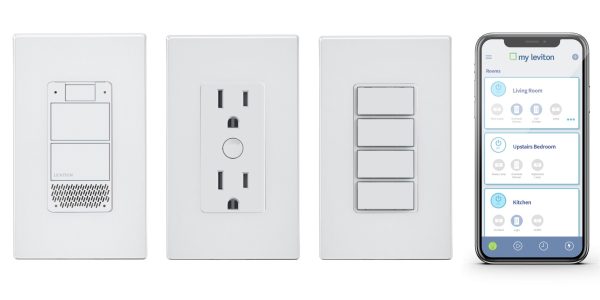 This morning at CES, Leviton has announced three new smart home products for its Decora smart home lineup and also refreshed its My Leviton app with new UI and more. Headlining the new releases is …

I did try the python solution without success . . . “new user of openhab since 2 week”.

No news on this? I have several of these dimmers, and was hoping to use OpenHab.

Unfortunately, you’ll have to try the Python solution posted above by @cmc.

It’s fine for people to voice their support for a particular binding, but this is a 100% volunteer effort. So, a developer has to decide to create a binding, and to do that they’d usually need to have one of the devices in operation for testing purposes.

The thing is, when a developer who has worked on OH for awhile buys a new light switch, they’re probably going to stick with one of the many options that already works with openHAB. So, it’s a chicken-and-egg problem. We basically need a non-OH developer who has Leviton switches to start using OH so that they’ll be motivated to solve it.