Hi Everyone i’m having problems with my setup i’m running on windows 10 OH v2.2

is anyone else experiencing this?
how could i track down this problem it might not even be OH

Ive been running 2.2 on a 4gb NUC in win 10 for months without seeing this.

I have z-wave 2.3 snapshot, fritzbox tr064, samsung tv, astro and nest bindings and use the mail out action.

What bindings etc are you using?

You can bring up the Task Manager and click on “More Details”. Then click on the memory column and it will sort all the running programs and services by the amount of memory they are using. When you RAM usage gets to 8 GB, do this and see what programs are using the most RAM. That will tell you whether it is OH or some other program that has a memory leak.

If it is OH, you will have to disable your bindings one by one until the memory stops growing and then report an issue on the binding that stopped the growth in memory usage.

Not on the RAM tab, look on the Processes tab. That lists all the programs running and one of the columns is how much RAM that process is using. 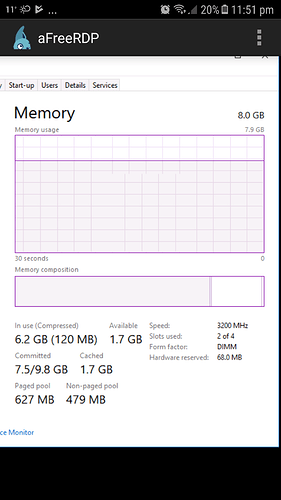 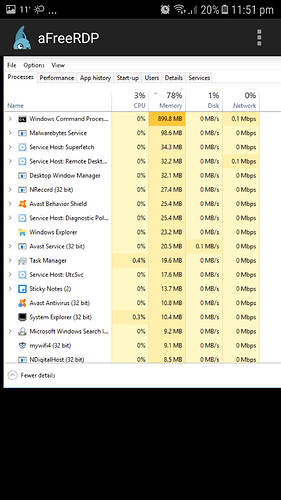 I have encountered this problem again

Yes. Closing the openHAB program would immediately free up the memory used by it. If you close it and the RAM doesn’t return then OH is not the source of your problem.

If OH is the source of the problem, you will need to remove add-ons one by one until the memory stops growing. Then file an issue on that one.

I have closed everything that was running on the machine some light network stuff, Openhab, nextpvr memory did not return so its not related too none of them how can I track this down

My ram usage should only be around 4GB

The only way to identify the source of a memory leak without resorting to hooking up a profiling tool is by process of elimination.

You will have to uninstall add-ons one by one and wait to see what one is there one that is growing.

its just the restore that worries me

Then you may as well not have backups. Backups without the restore are no better than having no backups. You need to create a new fresh install of oh (iirc you are on windows so it’s just an unzip to a new folder), stop your running OH and test out the restore.

Are you aware there are backup and restore scripts built into OH under the bin folder? Unless you are running unofficial add-ons it should cover cover everything.

IMHO, figuring backup and restore it should be your number one priority right now.

For a Windows or any other manual install, everything that is OH is stored in the main oh folder. However, the new machine will have to have your hardware dongles (e.g. zwave controller) on the same com port and other ancillary services like mqtt brokers and external persistence databases need to be moved separately.