I did a range test and it was blinking green with a yellow pulse at the end, which suggests routed. The Motion sensor is 6M away from the USB Stick Controller.

Here is the network diagram. When I bought the motion sensor closer to the controller the LUX/Temp updates were near instant. Putting it back into its spot it seems slow again… In terms of what materals are in the road, just timber - no steel or brick. Updates to Lux etc should be instant because without them my rules dont function correctly.

Number 10 is my Motion sensor 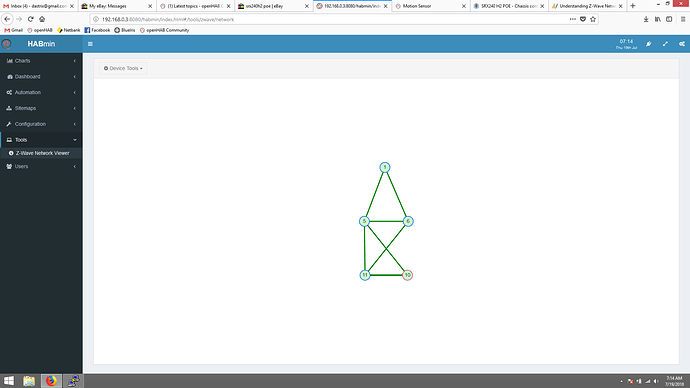 As far as I understand, update interval has nothing to do with how far from the controller your device is. It´s all about polling time specified in the configuration settings of the device.
I doubt 6M should be any problems.

Which device is it?

Hi @Kim_Andersen its a Fibaro Motion Sensor, ZWave Plus unit. Would it be because Habmin constantly looses its association group to LIFELINE, HABController on this device?

I cant tell for sure, @chris would have to help here.

But I had an device, (Everspring ST814) doing exactly the same, (ie loosing its 2. association group, used for controle). I kept on setting it quite a few times. And for some reason I dont know, it has kept it for a few weeks now.

But I just learned today. It could have something to do with timing.
When you set the association group, make sure to wake up the device so it can receive the new configuration. If you reboot or restart your Openhab, and the update has not been receive, the device will never receive it, and you have to send it again.
So either wake up the device manually, or don´t reboot/restart Openhab, if you devices is having a waiting update on it´s way.

When I´m testing new stuff, I tend to reboot my Rpi often. I have probably run into this problem, cause I had a few devices which didn´t receive the update. And the ST814 has not lost it assiciations for weeks now… So I believe this might have been the problem.

HABmin shouldn’t “loose” the lifeline - I’m not really sure what this means. We know there’s a display issue, but HABmin is just a UI - the binding is what manages the lifeline.

Anyway, no, based on what you said above, it’s not related to lifeline. If the device is sending reports, then the lifeline is configured. It’s either a routing issue, or simply an RF issue.

Thanks Chris, how would I determine its a routing issue?

Are you running the dev version (I think so)? If so, run a heal and see if that helps. It should help the mesh to sort itself out if you’re moving the device around.

Using the dev version from the start of this month.

Device isnt being moved around. Its in the same spot

Save lifeline to OPENHAB Controller, wake the device up, go back into habmin and its gone. Blank…

Device isnt being moved around. Its in the same spot

Save lifeline to OPENHAB Controller, wake the device up, go back into habmin and its gone. Blank…

As said, there is a known issue with the display in HABmin.

I moved it closer to test last night yes. There is a Fibaro Double switch that is line of site, 2M away.

OK re: bug. Ill live with it

I moved it closer to test last night yes.

Ok, so if it’s been moved, then you probably need to heal the mesh.

Updates to Lux etc should be instant

Beware that sensor could be designed to average out lux readings, to avoid jitter from passing shadows or reflections. It would usually be a useful feature, as with air temperature.

Yeah, but im talking darkness to all lights on not updating. Ill test it more tonight after i’ve done as Chris suggested with the heal.