Been away from the project for a few months, gonna try another stab at it. Originally tried Windows, now have openHABianpi and MQTT installed on a 3B+. Following the New User Tutorial>Configuration of openHAB.org, but getting different results from what’s shown in the tutorial. Specifically:
1 - After adding the Network Binding and my equivalent to “John’s Mobile” I get 3 channels: Online, Latency and Last seen; nothing for Time. Might this be due to software update not reflected in the documentation? Don’t think it’s a problem, just different (no?) Also, while Configuration>Things>“John’s Mobile” shows Status:ONLINE, its entry in Control shows the 3 channels but the Online channel indicates it’s not. Should it be, as in the tutorial? If so, what might I be doing wrong?
2 - Following the tutorial further, I added the Z-Wave Binding, went to Inbox, clicked the Z-Wave Binding link and, well, nothing. I see Inbox>Z-Wave Binding>Choose Thing but no links, instructions, anything. Looks like a dead end. (I have an Aeotec Z-Stick Gen 5 plugged into the Pi.; same results with it removed) Where go I now?

Never mind Item 2 above, now have Configure Z-Wave Serial Controller as expected in the tutorial. Don’t know what changed, but gonna continue on now. . .

Haven’t read the tutorial, but this is how it looks at my system: 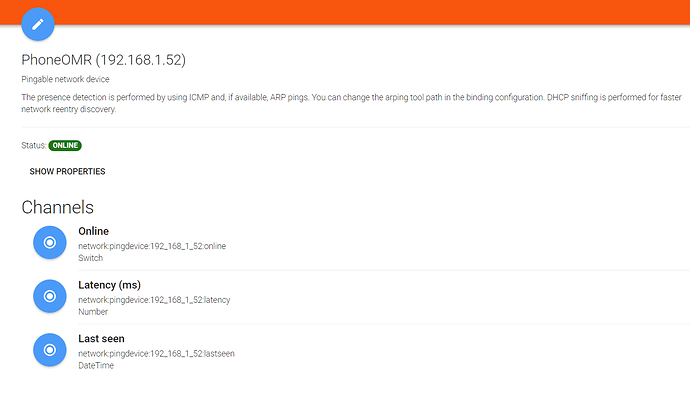 Be sure to install arpping if you are going to use it for presence detection.
Also set your WiFi router to assign a fixed IP according to the phone’s MAC.

Try pinging your phone from a shell.
Note that regular ICMP ping will mostly fail if your phone is sleeping.
This has been debated several times. Search the forum for some of my old posts deiscussing arpping.

Baby steps - Progressing, though next issue:
I had previously installed a ZW3005 wall switch which functions as expected manually. I included it with the Z-stick, noted inclusion by its proper LED indication. Plugged Z-stick back into Pi, manually searched with the Inbox; Was discovered as Z-Wave Node 2. . . In Configuration>Things>Z-Wave Node 2 at times it shows Status:ONLINE, then later Status: OFFLINE - COMMUNICATION_ERROR. It also shows it as Unknown Device with the 2 bulleted reasons:
1 - The device is not in the database; doubt that a popular GE/Jasco switch would not be (?)
2 - The device initialisation is not complete; the switch is obviously mains powered, seems unlikely cause (?)

Thanks for your reply. Displays same here, so I assume OH2 was updated and the tutorial not. Was mostly seeking clarification/verification that I was seeing what should be expected. Consider it as a non-issue now.
Yes, I have static addresses for nearly all my network devices.

The device is not in the database

Check here.
If it is not, ask @chris for credentials so that you can enter it into the database yourself

You’re right. I can vaguely remember it was.
I still think you need to install arpping manually though, but not sure.
Might me platform dependant.

OMR, thanks for both.

Constant fiddling, it looks like the dimmer is now talking (though it’s noted as ZW3003, not 3005). It shows only one channel, Dimmer - true? First time through so everything is new to me.

And I’m in Europe, so GE devices are not sold here. Different Z-Wave frequencies.
Search the forum or start a dedicated thread.

Have a look at the thing properties - it should show things like zwave_devicetype - can you provide either all of them, or at least the device type, device id and firmware version. From this we can check if the device is in the database.

Alternatively, take a look in the userdata/zwave folder, and you should find an XML file with this nodes name on it - can you post that here?

Here’s a shot of the Properties: 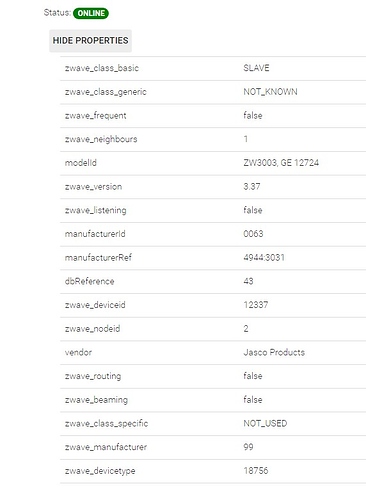 There is just a single channel on the device.

Another Q: If I manually toggle the switch, shouldn’t its new state appear in its Control entry? Manually switched light on, Control>Dimmer still shows off. Appears to be out of sync. Normal? Or something else to troubleshoot?

If I manually toggle the switch, shouldn’t its new state appear in its Control entry?

I’m not sure for this device. It doesn’t support associations which are the normal way that the feedback works. It might send a hail instead, which is a slower option, but should also result in the state updating. Or, it might do nothing, in which case polling is the only option (and that will result in out of sync data).