Where are you getting that information from?

Armbian build tools. Contribute to armbian/build development by creating an account on GitHub.

Considering that OpenHab can also run as low as on Raspbian, this should not be hard. But why would one want to use OS that rebrands other projects work and adds security holes on user land? Not to mention that Diet provides “perfectly working” horribly outdated BSP 4.9.y kernel? Yeah right.

@igorp does a lot of work on the Armbian project, thanks heaps

as I am now running Armbian on an Odroid N2+ that is flawlessly running for a few weeks and openHAB 3.

I’m jocking, I’m really curious about the N2+ but reading here on the forum and after a little bit of experience I think I will continue using a dedicated raspberry 3 for openhab and I will buy a N2+/RP4 for nextcloud, grafana, influx db and other stuff… I have a RP4/4gb and when I tried OH on that board I didn’t see difference.

I have a RP4/4gb and when I tried OH on that board I didn’t see difference.

If you have a big enough OH setup, then you will notice a difference. And specially when booting up the system, there is a huge difference…

I have both Rpi3B+ and Rpi4(4GB). My rpi3B+ is using an SSD, atm my Rpi4 is using SD card.
I can not recommed a Rpi3B+ anymore, if you plan on having a rather big OH setup.

I have proven that I REQUIRE the extra CPU in my N2+ because certain things I wanted to do failed to work in real time with a slower CPU. When you are talking about needing a real-time video stream processed within a certain time for a feature to work, it becomes a requirement. Just because you don’t hit 100% cpu load does not mean you don’t need a faster cpu. If a task has to happen in real-time there are cases where you need more cpu and simply waiting longer for a slower cpu to get the job done is not a solution that works, as it has to be delivered in real time.

As a real world example the 50% load I was speaking of is turning a MP4 stream into a MJPEG one for a single video camera. I had to compromise on video quality to even get it to run in real-time at that 50% load… Now I have more cpu power, I can use any qaulity and framerate I want (1080p and 20 frames a second) and I can actually do it in real-time at a 15% load ! I can now do multiple cameras should I wish and there are plenty of AI applications that I have on the todo list with the extra power.

Faster boot up times, faster responsive system and more applications are now actually possible to do that were not possible before. The C4 and N2+ is getting a lot of hardware acceleration support that may help some situations due to, openGL, panfrost / Bifrost support in newer Linux kernels so it is not just the bigger CPU but also the GPU can do number crunching.

You are right. If you use the board for multiple porpuse it is necessary maybe a NUC should be better at this point. Otherwise I don’t understand why the startup time is important. I never shutdown the board during the day.

If you have a huge smarthome system, and for reasons need to restart your system. You probably want it to get back online as fast as possible.
My old Rpi3B+ could take somehow 10-15 minutes to get everything back up running. In terms of a smarthome system, this is a pretty long time in my opinion.
Taken the price it would be to exchange the Rpi3B+ with an Rpi4 (or Odroid C4) its a low price (for me) to get things up running alot faster, (like 7-8 times faster). Ofcouse if you plan to exchange it to an NUC or N2, its a whole different situation due to the higher price for the NUC/N2. This is where multiple purpose comes in insted.

With OH3 and black Friday coming up starting to think replacing my rpi 3 with either rpi 4 or an odroid c4.
I do really like the support and openhabian with the rpi, but the c4 with emmc is also very attractive instead using sd cards.
Now I am running since a couple of years the rpi 3 with ssd after a couple of sd card failures. I do know ZRAM is now supported, but not sure how long this extends the lifetime of the card.
Anybody good advice?
Besides OH running a mqtt broker, influxdb and DSMR reader.

someone said to me that emmc don’t solve the problem

Have you ever thought about an n2+ instead a C4?

n2+ is higher priced then the C4, and don’t required the additional performance.
Mainly I do have 2 concerns:

Did saw Stuart is using the C4, and Kim was/is planning to.
Perhaps they or somebody else can take away the concerns, otherwise I’ll stick with the most mainstream option being rpi.

missing openhabian to supporting me setting up the system

Armbian has a way to install openhab2 built in and the official openHAB docs cover how to use it with step by step pictures. Easy as.

Also I have shared a script for openHAB 3 that I use here.

Guide: How to Install openHAB 3 under Armbian Development

If anyone wants to install openHAB V3 under Armbian with any of the many devices it supports, you can use the script below if the device has 2gb of ram or more. It will install not only Zulu Java 11 and openHAB 3, but also get your samba shares, mosquito and frontail all setup and working in around 15 minutes. Consider it a WIP and it needs to be run on a clean Armbian image, but it’s working well here on an odroid c2 and now also tested on an Odroid N2+ Don’t run armbian-config, instead do …

RE what Igor Said: See his post in number 16 of this thread it works well which is not surprising as all openHAB needs is a headless server which can run Java, no where near as demanding as a 3D desktop enviroment. The N2/+has been out far longer than C4 and still no news of anything faster is getting released as coming out soon.

One feature I love with the N2+ is you can install a eMMC and a uSD card at the same time, then there is a physical switch to choose which one will boot up from. I plan to setup a working backup on uSD and keep the eMMC as my main production boot. If their is any issue when I am not at home, other family members can flick the switch and reboot and have a working system again. For any hardware issues I have a second one sitting on the shelf running Kodi I can swap out for testing with.

Ah thanks, sounds good.
Will dive a bit more in the comparison between rpi, C4 and N2+ then the coming days!

I’ll be willing to give armbian a try, but I can’t seem to find instructions on how to write it directly to the emmc of the odroid c2/c4.
Is it just write and go? The guide mentions that I need to run some kind of script, but it is not clear if that is only necessary to move the installation from the sd card to the emmc memory.
Has somebody else already tried it?

but I can’t seem to find instructions on how to write it directly to the emmc of the odroid c2/c4.

Those boards do NOT have any built in emmc, which is confusing as emmc normally is soldered on. They come on little boards with a socket on them so if the drive fails or you wish to upgrade you can swap them out at any time. 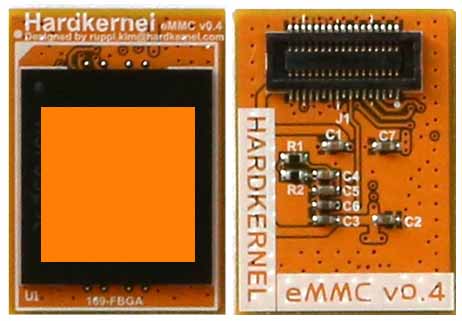 and you just program like any other uSD card using one of these.

Thanks for your replay.
I just am unsure if I still have to run the script from the guide to make armbian work with emmc from the start.

I’m aware that the emmc is piggybacked and I have the emmc to sd adapter.
My plan is to flash the image directly onto the emmc and then attach it to the board.
Currently I am unsure if I have to take additional steps to make everything run properly

I am running OH3 and armbian with an odroid C4 since 4 months. I am very happy… enough power and absolute stable.

My plan is to flash the image directly onto the emmc and then attach it to the board.

This is good. After that your odroid will boot and you can start to configure the operation system (create user, etc.)
For the installation of OH3 you can use the script. But be careful it will install 32 Bit java. I had better experience with 64 Bit java.
Good luck. Tell us if you need help.

The guide mentions that I need to run some kind of script, but it is not clear if that is only necessary to move the installation from the sd card to the emmc memory

If the reason to move to Odroid is that you believe eMMC does not suffer from flash wearout like SD cards do then you’re mistaken. Both use the same flash mem which is the common root cause, so it won’t make a difference. Read on here.

I’m well aware that eMMC suffers from the same wear as SD cards.
The C4 is a much better package than the PI4 because it’s ~25% faster, has HW-crypto acceleration, gigabit Ethernet, a passive heat sink so no throttling and lower temperatures, faster USB,way faster load times thanks to eMMC and lower power consumption. And all that for the same price as the Pi4 4GB.

I’m well aware that eMMC suffers from the same wear as SD cards.

Ok. I don’t want to start another HW discussion. If you feel those advantages are worth the extra risk and efforts in software then feel free to go for it. I just don’t want people to do that for wrong reasons. Most are not aware and mistakenly believe it buys them safety.

I definitely am, that’s why I’ll be using my C2 as a playground and the C4 will become my new work horse.
For beginners I’d always recommend the Pi, I even run one of my remote openhab instances on a pi4 with openhabian because it’s easy to set up and quick to replace.
But at home where I can ssh into the machine and set it up as I like the odroid is a much better fit and the additional software is (in my case) not that much.