OH2 / HABmin: How to do z-wave inclusion/exclusion?

sorry, I’m sure it’s right in front of my eyes, but I can’t see, where I can do a z-wave inclusion/exclusion in HABmin.

HABmin provides functions to include and exclude devices from the ZWave network. In the ZWave Network Menu is an Include and Exclude option - selecting either of these will put the controller into include or exclude mode for 30 seconds. 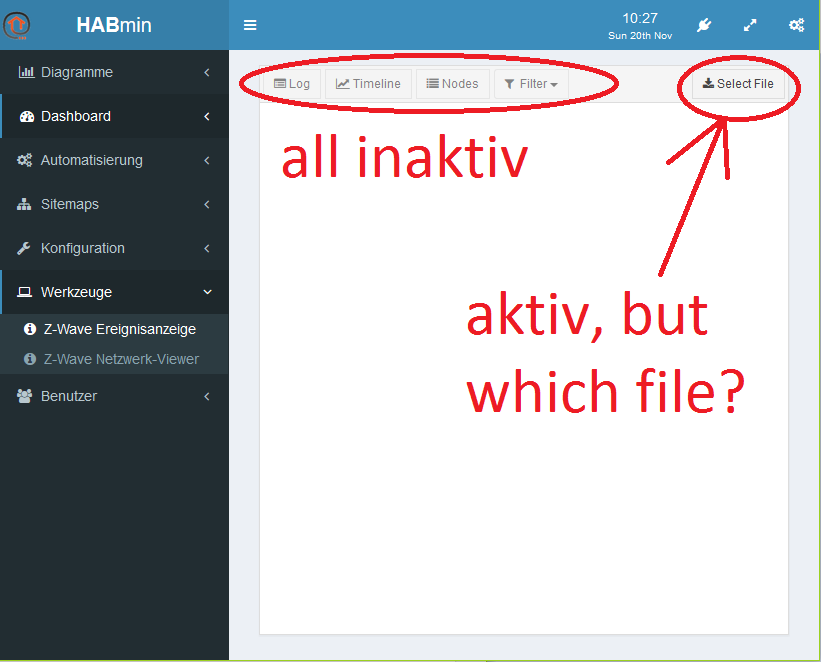 Would somebody please help me? Thanks.

Just in time, this topic appeard:

I have added a small zwave network to my openhab installation. Although I managed to get my zwave controller and three zwave actors to work I have problems with the habmin zwave interface. I I select the zwave network view I can see the graph but the button “device tools?” is disabled (see screenshot). No configuration is possible via habmin. For all management I instead used the openzwave control panel. i’m using openhab 2.0.0 snapshot #595 (snapshot from yesterday) [image]

Ok, I have to look at the thing configuration menu.

There is a Exclude Devices option.
What about the Include Devices? @Dominik_Bernhardt did you find it?

What about the Include Devices?

To include devices, this uses the standard OH2 functionality so there’s no special ZWave command. In HABmin, the device search is done with the search icon button -:

Chris, maybe I’m a little confused. Are you saying there is OH2 functionality to put your controller into Inclusion Mode? I only ask because every time I have to use the Z-Stick to include an item directly I have to remove it from the Pi2, include, reinsert, and then restart the Pi. Not the biggest issue, but not as smooth as with OH1.

Are you saying there is OH2 functionality to put your controller into Inclusion Mode?

Yes, of course - you can include and exclude nodes directly using OH. This has always been the case in OH2.

Ah, I see. I think I misunderstood “Discovery”. I assumed this was like the Inbox in PaperUI that discovered nodes that were already on the controller.

I’ll have to play around when I get home, time to add a few smart switches for Christmas lights anyways!

I assumed this was like the Inbox in PaperUI

It is - it’s exactly the same function.

Learn something new every day!!!

Yes, of course - you can include and exclude nodes directly using OH. This has always been the case in OH2.

Just to confirm, is this inclusion NETWORK WIDE INCLUSION or just near the controller?

I’m not convinced that NWI works - this is not something that I have any documentation on and I’ve not confirmed it works. So I would assume that to include devices they should be within direct range of the controller (10 to 15 meters should normally be ok).

If someone has confirmed NWI works, then maybe they can update this…

From what I’ve read, I thought it was best practice to include your zwave devices near their location of use as so they would identify their neighbors and build those associations. If you take the sensor to the controller the devices it may see may not be the ones closest to it during normal operation.

If this is the case, is the nightly “heal” designed to fix those connections and allow the devices to discover their new neighbors?

It might help if the devices are included in-situ, but as this is often not possible, the system should resolve these movements. ZWave is designed to have mobile devices (eg hand-held controllers) so static routes are not the only way to work. It should be noted that not all devices support network wide inclusion - this is a relatively new feature so older devices don’t support this (and this is needed even if the device being included supports NWI).

The nightly heal should resolve any movements although it’s worth noting that the nightly heal is not included in the current OH2 master (only OH1 and OH2 development version).

The nightly heal should resolve any movements although it’s worth noting that the nightly heal is not included in the current OH2 master (only OH1 and OH2 development version).

So should one issue a manual heal via HABMIN after all of the sensors have been moved to their permanent positions?