I want to call an existing blockly script from my Rules.
Whenever I choose “execute a given script” it only let me create a new one but I can’t select from the existing one.
The one I created from the rule does not show up under scripts.
I would very much prefer to have my scripts listed under scripts and just “trigger” it from Rules.
Where do I got the idea wrong?

Background info:
OH 3
Rule set via: When - Then - But Only IF
Script: Blockly script 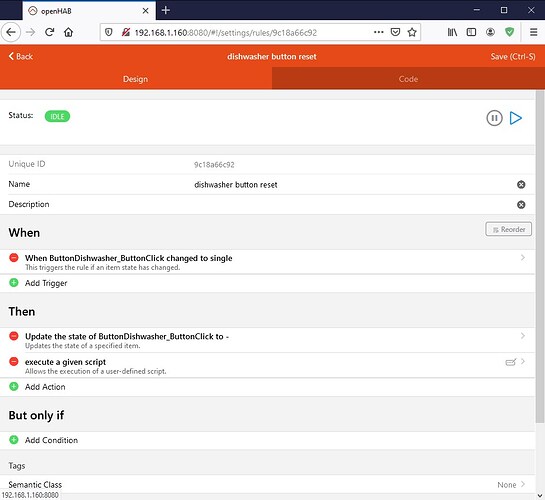 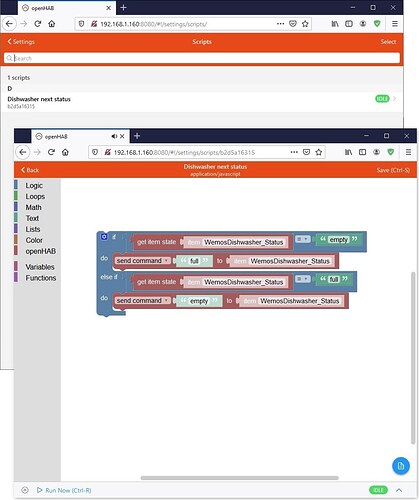 Hoi
When I create a blockly script it just appears in my script list.
Then I make a Rule where I choose “Other Rules” in the THEN part and 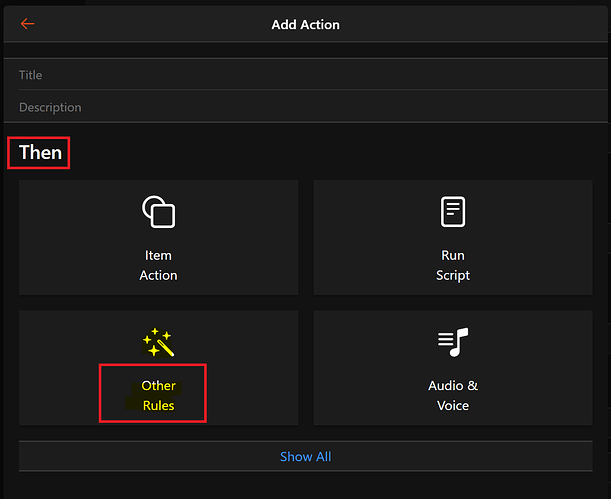 then I click on “Rules” and I can select my script, made in “blockly script”. 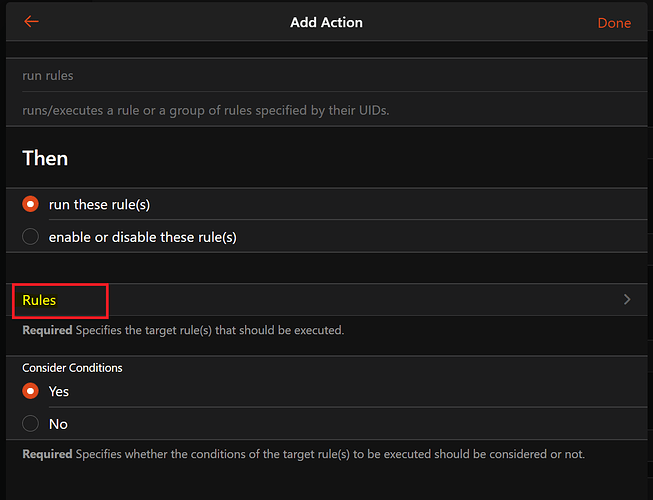 Maybe I misunderstand your question or don’t see it correctly

Edit: my apologies, I did not read your response properly in my first try.
Yes your answer solved my problem and indeed let me select a script under rules.
That is pretty well hidden and I would say quite user-UN- friendly. Anyway I probably will remember it till the end of OH3 after spending hours scratching my head

Running another Rule works as you described but I’d like to run a script instead of another Rule.
I probably can move it around to a rule actually but that was not what I initially planned to do

If I remember correctly (but I am not an expert) then rules and scripts are basically the same (if you take DSL script language as an example). But rules can respond to tiggers (eg a door opens or a predetermined time is reached) and scripts cannot.

So you can use a rule to run a script.

In Openhab 2.x i used rules like the example below

Now I can (in Openhab 3) seperate this in to parts: Rule end script

Then you create a script that is triggered by the above rule.

Scripts (depending on the scripting language) can perform more complex tasks than simply sending the command ON to a lamp.

But sometimes a rule is more than enough.

Someone will probably correct me if I miss the point completely.

If I remember correctly (but I am not an expert) then rules and scripts are basically the same (if you take DSL script language as an example). But rules can respond to tiggers (eg a door opens or a predetermined time is reached) and scripts cannot.

Correct. In MainUI a “Script” is just a special case for a Rule. It is a Rule that consists only of a single Script Action and it is tagged with “Script”. It really isn’t anything more than that. That is why it shows up under “Other Rules”; it is an other rule.