Edit: @ljsquare can you check if you also get this line when setting karaf to debug:

I haven’t checked yet, but I found another post that describes my/our exact problem:

OpenHabian 1.6.2 (the latest release) running OpenHab 3.0.0 on my Pi3 B+. Was previously running OH 2.5 fine. I wiped and burned the new image, starting fresh without restoring old files. No textual files from OH2. All configured using “the new way” through the main UI. The installation goes fine, it begins working great. But after several hours, TOP shows the openhab process at 100% or higher. And it’s throwing heap space and out of memory errors. The UI ceases to function, rules and scr…

Thanks for the link!

I might have found a solution:
First of all, after stopping openhab, i overwrote the addons.config with the addons.cfg where only package=standard was defined. So the addons.config is now clear of any packages (it still had some 1.x bindings in the beginning).
Secondly, i found a file named:

Which i renamed openhab-addons-3.0.0.bak.
Then I cleaned the cache: openhab-cli clean-cache
After restarting openhab all your bindings will be gone, but I re-added them all and now it seems to be running smoothely.

My unqualified guess: Openhab got the addons from two sides at the same time, the kar file and the config file.

I’ve got the same problem.
I did a clean install with the Openhabian v1.6.2 on a RPI4B.
I didn’t import anything and just starting from scratch.
The system becomes slower and even unresponsive after a few hours.

I read on an other thread that this issue was also found on the M2 and M3 builds.
The problem might be in the Rules, the seem to be parsed every time the run (don’t no if this is the case).
This could explane why a rule is taking a ‘long’ time when it is triggered.
I’ve seen that a simple rule can take 5 seconds.

I turned off my rules for now, for testing the effect.

Do you have your rules defined in the UI or via text files?

I’ve created everything with the new MainUI, also the rules.
Only the sitemap with a textfile because some options were not supported yet with the UI.

It seems that there’s a problem with DSL rules created in the UI:

The UI. And I am quickly realizing there is a potential huge problem with this. These two DSL scripts, composed in the UI, took 4 to 7 seconds to execute. During those 4-7 seconds, the CPU would be over 100%. And after several hours of normal operation (scripts running every 5-10 minutes), the whole thing would just keel over dead out of memory and CPU pegged. The exact same operation performed by an ECMA script composed in the UI executes so fast the indicator doesn’t even change to runni…

Depending on how many rules you have you could try to put them in text files instead. Just until it’s fixed.

To confirm what was expected.
After I turned off the Rules in the UI, the system load stays 's low and resonsive.

I hope the Rule problem is getting a fix soon, for now I will be using my old rules files again.

Hello
I have the same issue. After a fresh install of OH with etcher & the openhabian image, with everything fresh inputted, all through UI, CPU load is at 100% (RPI).
However, disabling the rules I have, did not reduce the load.

I still see this problem on my side too. Is there a solution meantime?
Fresh install on a RPI3, all items/rules/… are created over mainUI.
CPU is used 100% . 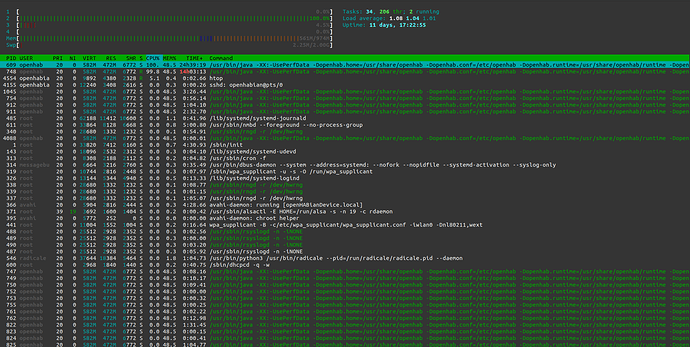 When I reboot the device than it works for some days and we see that cpu load is low. 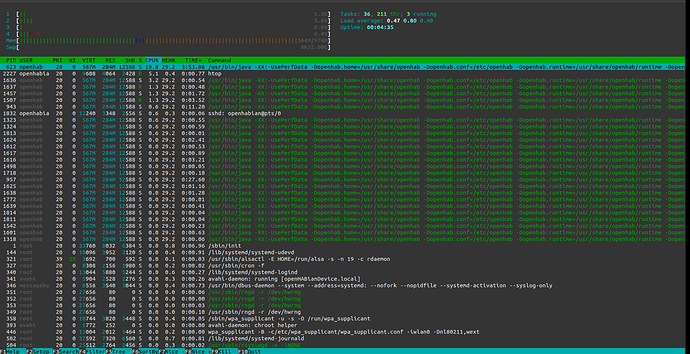 Are there any timers in your rules?

I ran into the same issue after using timers (all created in main UI).
had to reboot daily.

More useful than “me too” would be try out the latest fix relating to UI entered rules.

For anyone looking to test this, 3.1.0-S2216 and beyond should include the fix committed yesterday. I’d be very curious to know if someone wants to upgrade to the snapshot and see if it fixes the issues.

Hello! I have the same problem and really want to test this fix. But I’m not shure how. Could you writedown the instructions, or send the link of them.
Thanks!

The easiest way would be to install a Milestone development version.

Hi ! I’ve setting up a new Openhabian 3.1 Instance on a Raspi3+ and had the same issue. Now i could solve the problem for me. I’ve migrated text based rules from OH 2.5 and one statement in a rule causes the the unresponsive OH after a few hours.
The rule switches only a few lights, but when it’s fired a storm of event’s are looping and flooding the log. This was caused by a “postupdate” command for a item enabled for the openhab smart home skill, to control with the amazon echo’s (text based item defined as “switchable”. The “postupdate” for this item makes OH running wild and causes the high cpu load.

I have a similar problem. But I can connect without any problem/delay with Basic UI or openHAB App.
Is ist necessary ti cancel the rules is it enough to deactivated it?

same issue on my fresh installation. CPU goes to 100% after some days but i don’t have a memory leak.
No rules are active.

since about one year I’m trying to set up an OpenHab 3 configuration in my garden house. As it is remote my possibilities to work on it is rather limited.

First I want to express that I’m really fond of the concept and the flexibility of OpenHAB. It is really great!

Unfortunately I’m facing annoying problems that limit my1 joy with it. As it mainly concerns the topic treated in this thread and none of the solution tips I found here and in other forums helped to overcome the troubles I decided to add my case here.#

In OpenHAB I’ve added the bindings below:

As described in this thread the Java process runs on 100% CPU load after about 6-9 hours. There is a cron job that stops and re-starts the OpenHAB service each day at midnight. Thus in the morning I’m able to access the MainUI but at about 9 AM I receive a gateway timeout and afterwards the myopenhab cloud reports that the server is offline.

According to the tips I found in the internet I disabled the rules, removed the items that access the image/video channels of the IP camera things.

One day I did not access the server at all (neither MainUI nor the admin page), one day I just checked the MainUI pages, another I did some modifications via the MainUI. But the result stayed the same loosing contact at about 9 AM When making modifications even earlier).

Furthermore I noticed that the used Ram increases after each re-start of the OpenHAB service. After reboot of the machine it is approx. 15-20% and after a week (re-starting each night) its ast about 50-60%.

Two questions come to my mind:

I would be really happy if anyone could answer my questions or give me advice how to overcome this discouraging problems.

As @matt1 already said please don’t just post here but open a new thread.
Read How to ask a good question / Help Us Help You - Tutorials & Examples - openHAB Community before you do.

I suggest you move to openHABian as the basis of your box first.
It’s a known setup then that people here can help you with while only you know all the details you have configured on your current system. A RPi3 can handle OH but it’s a little ‘edgy’ so you have to be careful with all the config details to affect memory use.
These are of importance when looking after issues with performance like you do but noone wants to start a lengthy Q&A for this.

PS: Just flash latest openHABian image to a new SD (a 16GB will do BTW, or get an ‘endurance’ tagged SD model) and export + import your current config.
When you do, also re-do your SD setup. System on USB is as unreliable as on internal.
Check out openHABian | openHAB and go for SD mirroring.

Thanks a lot for your responses and sorry I chose the wrong way to pose my question!
Norbert