I am working towards mifgrating my 2.5 environment to 3.0 and experimenting with understanding the rules and script section and wondering if someone could help - below is the old rule I used for presence simulation based on a group of items when the “away” switch was selected.

This rule fired every 1 minute of every day.

If not would the below rule “just work” in OH3?

The rule will just work in OH 3 almost as written (you’ll have to convert the plusMillis to plusNanos since ZonedDateTime doesn’t provide plusMillis.

But you have some other options if you move to the UI or move to one of the other rules languages.

Thanks @rlkoshak, point 1 seems to make the most sense and within my limited capabilites to me - I am hoping to keep everything UI based as I slowly work through moving 2.5 to 3, so far so good.

Unfortunately the other two points are a bit beyond my comprehension at this stage.

Can you please explain why 2 and 3 would be better than his cronjob solution? I did basically the same as described in the original question and just found your optimization suggestions. I adopted your first suggestion as it’s an obvious improvement, because the script doesn’t need to be executed at all if the switch is turned off.
But in my understanding the other two suggestions make this over-complicated, just for saving a cronjob. Is the performance of running a cronjob that checks for a virtual switch actually noticable at all?

It depends on what the rule is doing.

2 is not complicated at all. You don’t even need to write any code. 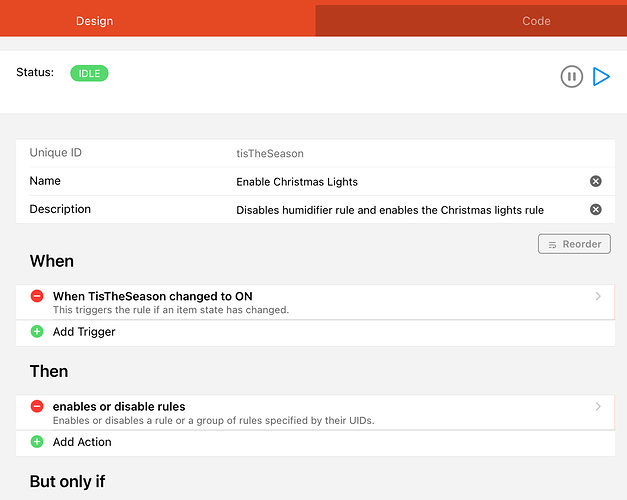 This is one of the two rules that enables/disables my christmas light rules based on the state of the TisTheSeason Switch Item.

The nice thing about this is you have a visual indicator in MainUI which rules are runnable or not.

A disabled rule is also not even loaded into memory. There is no chance that it can interact with other rules or be a source for errors and such. It’s generally a good thing to not run things that are not needed, especially when debugging a problem.

3 is a little more complicated but not significantly so when using some of the other rules languages where looping timer is available as a library. But the main advantage is it reacts immediately. If you have, for example, an every five minutes cron trigger, it can be up to five minutes before the rule reacts. With an event driven rule/implementation the rule will react immediately after the switch changes.

Sometimes that matters, sometimes it doesn’t. I mentioned it for those where it does matter.

Finally, if you use lots of cron triggered rules, unless you are very careful with your expressions, you will be pounding your OH every so many minutes as you have lots of rules all triggering at the same time. This could have a performance impact compared to the rules triggering in a more spread out way.

It’s probably worth noting that the Presence Simulation rule template on the marketplace implements a cron trigger with the but only if condition approach. And since it’s on the marketplace, there really is no longer any need for anyone to implement this themselves anymore. Persistence Presence Simulation just install the rule template and instantiate and configure the rule.

Thanks for clarifying the second suggestion. I will consider doing this for the “away” switch.
I understand the benefits but would like to point out the downsides:

Regarding the point 3:
I see a continuously running script loop taking up more resources than a cronjob that runs every couple of minutes. Also if the script breaks for some reason, the rule won’t be restarted, so it will just stop working.

Two additional rules in the list (more to see, more to understand). Imho that’s against the KISS principles.

Put another way, if having fewer rules is the goal of KISS, then one massive rule with all sorts of filters and switch statements and branches and such would be the simplest setup of them all. Clearly that’s not the case.

If the rule is re-enabled after a reboot (if I understood you correctly), then this needs to be handled as well, because the last status should be preserved.

This happens only in one case. If you write your rules in text files instead of in the UI and you do not provide your own UUID for the rules that are defined in the text files then every time that text file is loaded, all those rules defined in those files will have a new randomly generated UUID. The simple rules to disable or enable another rule depend on that UUID remaining the same.

But if you define the rules in the UI, or you specify the UUID in your text defined rules so they don’t change every time the file is loaded, you don’t need to do anything at all. A disabled rule will remain disabled after a reboot as will enabled rules. The last status is preserved.

I see a continuously running script loop taking up more resources than a cronjob that runs every couple of minutes.

It is exactly identical to a cron job that runs every couple of minutes. A Timer isn’t continuously running. A Timer is a way to schedule a block of code to execute at some time in the future. In openHAB Timers and cron triggered rules are even handled by the exact same scheduler inside openHAB.

The biggest difference is you have more control over how and when a Timer runs than you do with cron triggered rules. And if you care about performance (which doesn’t really matter here) the Timer will consume far fewer resources because it will only be running when there is something to do unlike a cron triggered rule which has to run all the time just in case there is something to do.

Also if the script breaks for some reason, the rule won’t be restarted, so it will just stop working.

By that logic, if the rule breaks for some reason it will continue to break every time it’s triggered by the cron trigger. So what’s the difference? Something’s broken in either case. And yes indeed the rule will still retrigger and when the rule does retrigger based on events it will see that the timer isn’t running and create another one.

These are all options. None is necessarily better than the others. It all depends on what your requirements and end goals are. In my rule template I chose a cron trigger with a condition because based on the requirements that was the most simplest choice for implementation. But if I had a case where a simple rule condition wouldn’t be sufficient, I’d use another rule to enable/disable. If I had a case where I really needed something to start happening immediately after events occur and states change I’d use a looping timer.

Put another way, if having fewer rules is the goal of KISS, then one massive rule with all sorts of filters and switch statements and branches and such would be the simplest setup of them all. Clearly that’s not the case.

I would argue, that there is a difference between having everything in one rule or just the stuff that belongs together. Having one rule with the sole purpose to control another rule seems like they better belong together. Just by looking at the actual rule, you don’t see when it’s used. You need the trigger rule to understand this. But I absolutely understand your point. Maybe this depends on personal taste. I might try your suggestion in this specific case and see how it feels over time.

The last status is preserved.

Thanks for clarifying, apparently I misunderstood a previous statement. My bad.

Instead of using a cron triggered rule, use a looping timer.

How is this case any different?

By that logic, if the rule breaks for some reason it will continue to break every time it’s triggered by the cron trigger.

No, that’s not unnecessarily true. There are little gnomes in your computer that sometimes once in a full moon like to flip a bit and you’ll have a problem that you cannot reproduce. I’m sure you know what I mean. To avoid having that you can either run the script freshly every time through a cronjob or implement a separately running watcher rule/script/cron that makes sure the actual rule is still functional. Imho the second option makes it unnecessarily complicated.

These are all options. None is necessarily better than the others.

Correct, but it’s worth discussing them to learn and improve. I appreciate your time and arguments. Thanks.

How is this case any different?

However, let’s pretend that long running rules are still a really big deal.

If I create a timer to go off in now.plusMinutes(5) (i.e. five minutes from now), the rule is only running long enough to create the timer. The rule will stop executing and return in milliseconds.

Then in five minutes the timer will be triggered and the timer will only be running long enough to execute the code that was passed to it, again usually just a few milliseconds.

All the rest of the time the rule is not running. No thread is being consumed. No resources are being blocked. A looping timer is not a busy wait loop. It’s a way to asynchronously schedule a block of code to run at a later time.

There is no long running rule here. There is a few milliseconds worth of execution every five minutes as the looping timer triggers, exactly the same as a cron triggered rule would consume. The only difference, is we have more control over when and how the looping timer executes (e.g. we can change how often it runs on the fly based on state or events, trigger it to start running immediately upon an event, etc.).

To avoid having that you can either run the script freshly every time through a cronjob or implement a separately running watcher rule/script/cron that makes sure the actual rule is still functional.

But you are not running a fresh script. It’s fresh only the first time the rule is triggered and run. The script is reused on every run after that. If you want a fresh rule, you need to disable and reenable it on every run or reload the file it’s defined in or something.

In fact, if you did want to have a fresh script on every run of the rule, you’re better able to create that situation by using a looping timer. The rule will trigger based on some event. When it triggers it can cancel and create a fresh new looping timer.