Can one of you do me an example, step by step, how and what I need do to, to setup a rule which switch off my new shelly plug S, when the connected power supply has lower than 3 W power usage.

It would be perfect to get a example how to do that.

So now it is ready after several weeks for everyone who wants to recreate it.
Example: Use a separate script (not in the example) to switch on the WLAN sockets e.g. 5 times a day with a fixed timer. After switching on, the socket switches to e.g. off again after 5 seconds if no “load” of the consumer is detected.
The socket also switches itself off when the load falls below a certain threshold value.
Practical example: the socket switches the mobile phone power supply on at 4:00 a.m. and immediately switches it off if it is not plugged in at all. If the mobile phone is connected, the socket is switched off again when the mobile phone is fully charged. This means that there is no longer any standby consumption by the connected consumer.
Or simply plug in the e-bike in the evening and in the morning for the way to work, the battery is always fully and freshly charged. Enclosed the screen shorts to build:
The “first” script is a timer with 5 seconds, which has to run first in order to catch a kind of hysteresis.
The second script is a blockly script. The order must also be like this, since the “then” run one after the other. Thanks to Stefan Hoehn for the original help and KlukHaus for the further elaboration. 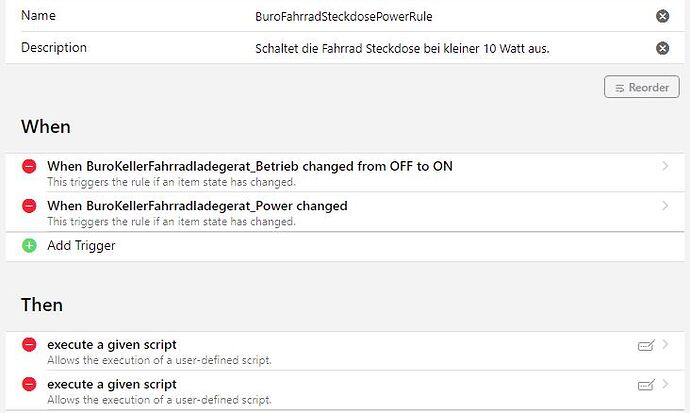