Hi so after trying to google it everywhere, trying a different sentence and etc (Search results for '' - openHAB Community)
I really need a tip that I cant find at the docs.

Read the openHABian docs, linearly, from the beginning.
There’s mentioning how to install OH2 in there, too.

Right now Ive started with Apt install (recommanded) at stage 1, installing Zulu 8 openjdk.
Well I downloaded the .Deb file but got error while trying to install it 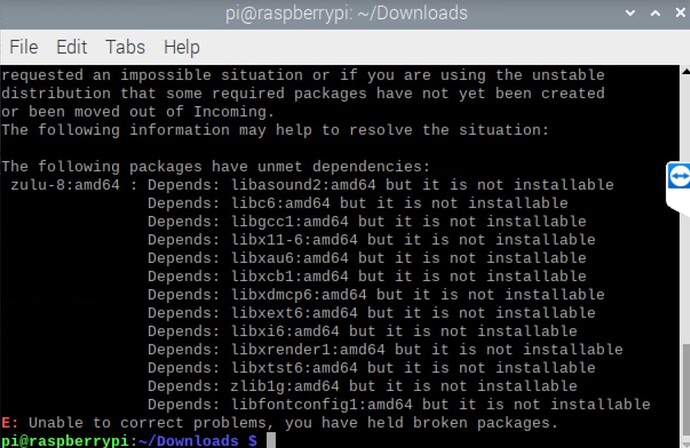 The terminology here is confused.

You mean an SD card with Raspbian installed as the OS?

Can I flash .img on SD card and plug in to the RPI 4 (in addition to the first SIM) and be able to run oh?

Assuming your answer to the above is “yes” then the answer here is no. You can’t have two OS’s running at the same time and the openHABian image is a full Raspbian OS with setup scripts to install openHAB and it’s dependencies as well as other configurations and customizations.

Should the best method for me its to install OH via Linux? if yes I need the APT .(deb package)?

If you want to keep the existing OS rather than using openHABian than yes. The Linux installation page has instructions for how to add the OH repo to apt so you can install with a simple sudo apt install openhab2.

The Downloads page also has these instructions for OH 2.

Okay, first thank you so much for your answer !
My mistake about the SIM I mean to SD and got the answer that I can’t run 2 OS’s .
Now for Linux Installation OH 2, I started here, openHAB on Linux | openHAB
at section, Meeting the requirements I’ve checked the system for the Zulu download
(on terminal ‘dpkg --print-architecture’) and got ‘armhf’ Means , ARM Hard Float.
However, I’ve downloaded Zulu 8, ARM 64 , .Deb file > this one:

And I can’t install it , this is the errors: 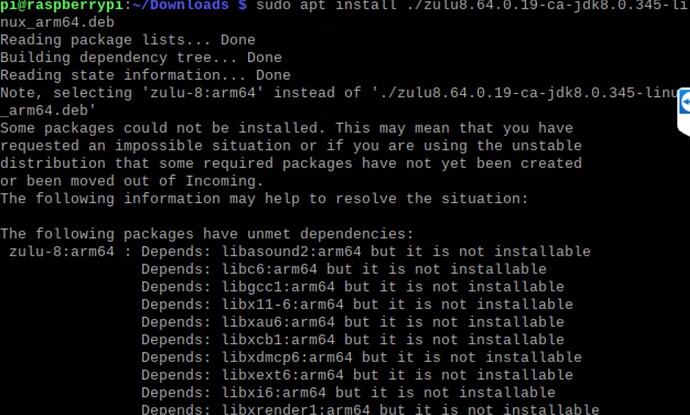 You’ve not actually mentioned what version of Raspian you are running but ultimately, if you are going the non-openHABian route like this, we are limited in what we can do to help. We are not a general Linux support forum. We can and help with openHABian because we know exactly what the versions are and exactly how they are configured. If you are going to do it all yourself, well you have to be relatively self reliant. We can’t really help It becomes a huge time sync.

The last time I installed Java on a RPi, I use Adoptium’s JDK and I installed it by adding the repo to apt and used apt to install it. All I can say is that way works.

Well, thanks,I got that step, and fully understand the problem about asking here question on Linux subjects, It’s just important for me to be able run Respiban OS and Openhab 2 on that.
Right now I’ve started APT install, run a few lines. but stucked on choosing Stable/Test/Snap, because I need Openhab 2.5. If I get it right if I choose on Stable version I will get Openhab 3.0
edit:
I just found a OH 2 linux installation page that guide to the 2x versions. it’s not what I followed till far

will figure it out . thank you

It’s just important for me to be able run Respiban OS and Openhab 2 on that.

Maybe you should start at the beginning and explain why.
There’s usually no valid reasons not to use openHABian, and you can run either OH2 or OH3 on top.

Honstly , Im not sure it’s the best way to do , but I have RPI 4 (with nvme ssd) and my plane it’s to run another programs / systems on that Respbian OS , I am not sure it’s 100% possible, I want Android TV application on my RPI os as well , and also Openhab 2x (Openhab 3 it’s so different that I know).

So because all of that I see my only options to all this is that way after alot of research and reading. If you have any advice for me I will be more then happy to know.

By the way , right now I am trying to figure out why openhab not detact Java 8 , I’ve installed like docs, checked my system to choose the one I need and tested -version with final check , and I got the version as needed. still is not detact by Openhab, trying to search for it now.

Well there’s a lot of stuff written about OH and OS setup but given your conclusions, I think whatever you read mislead you.

The (current !) openHAB docs clearly recommend to use a dedicated system for OH. That’s for safety reasons. Noone should mix mission critical systems (your OH server) with non-critical ones (Android TV or whatever other app). It’s not that it wouldn’t work. It’s just a bad idea.
But you can install anything on top of openHABian that you can install on Raspi OS.

On OH2 vs OH3 I don’t know where you are coming from and where you read about “so different” and why that should matter.
No it’s not “so different” in the basics. And where it differs it’s huge steps forward so why not take advantage of those.
Any beginner, clearly start with OH3. Anyone to already run OH2 on some other system might want to migrate hardware, but that’s about the only reason I can think of why to install OH2.

No it’s not “so different” in the basics. And where it differs it’s huge steps forward so why not take advantage of those.

And I’ll add that you can run and configure OH3 just like OH 2 with only a few exceptions. It supports the same text configs, same sitemaps, same bindings configs, etc. There is lots that’s new in OH and some new ways to do things, but all the concepts are the same and you don’t have to use the new stuff.