I downloaded the openHab-Core 2.5.0.M1 from this repository https://github.com/openhab/openhab-core/releases/tag/2.5.0.M1. I went to the project directory using cmd and ran mvn clean install and it generated this error.

After that I tried importing it to eclipse and then it gave me this error. 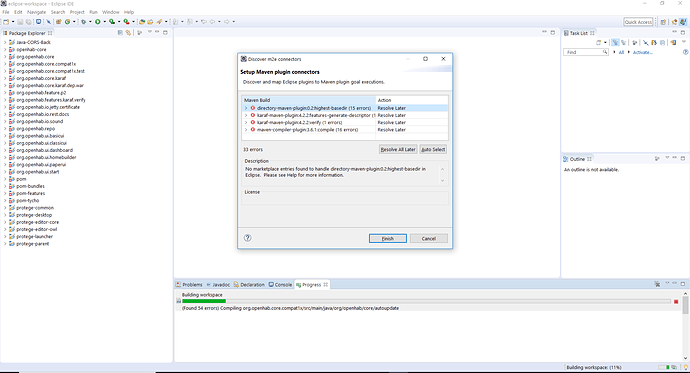 I pressed Finish and wet to run configuration like this 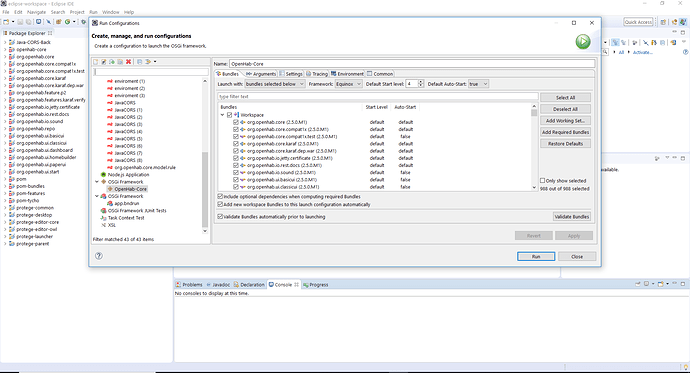 I tried the option of updating maven in eclipse and I tried this on version Openhab-Core 2.4.0 and it built maven correctly but generated kind of the same error in eclipse.

You will need to use PDE to build the 2.4 and 2.5M1 core. After M1, the build system was changed to BND and ESH was reintegrated. Why would you want to develop the core for either of those?

Thank You So much for the answer. Concerning your question i already posted my whole project description in this post Starting to Develop on OpenHab-Core and I have a couple of questions to ask

@5iver sorry but this still gave me the same error

For the sake of not being banned from this forum, could you please stay in one topic and not open another one every 2 days.

I think you didn’t grasp the current situation so I’m explaining it, because apparently there is no blog post or announcement about it (core maintainers are not the best when it comes to public affairs and information flow here).

And we haven’t yet recovered from 4. We are currently at the point that at least everything (almost, MaryTTS is still failing) builds again. There is no working IDE setup and the initiator of the project (Kai) struggles to get a working IDE for himself even.

We are overdue of milestone builds M2, M3, M4 and M5. Those are usually released every month.

The next big stable release is according to the half year release schedule due in about 4 weeks. Nobody knows if that timeline is realistic.

That’s the reason why you cannot expect much help right now and we are rather stressed ourselves. Your timing of writing your thesis is just a bit unfortunate. You can expect a working IDE in about a month hopefully, together with the OH 2.5 release.

You might try with older checkouts, but that might be fiddling a lot, because the old infrastructure (tycho p2 repositories) is already unmaintained or shutdown. The snapshot builds are still your best bet rn.

I think you didn’t grasp the current situation so I’m explaining it, because apparently there is no blog post or announcement about it (core maintainers are not the best when it comes to public affairs and information flow here).

Thank you for clarifying again with this summary.
It would be very useful if there had been a similar clear communication from the core maintainers or Kai earlier. This would prevent a lot of the recent negative vibrations.

Thanks again for your diligence of keeping people on task!