Four years ago we started out on a project to rebuild a family house on a view lot. In the process, I wanted to implement home automation, but knew little to nothing about it. We moved into the project home and I began the search for the right solution. Through searches I came across OpenHAB and decided to give it a try. I had an Ubuntu server running for backups, SQL, and a media server, so I installed there. I followed the tutorial to install Network binding and play around with presence, and my journey was started.

I purchased a Z-Stick, a GE wall plug, and an Aeotec multi-sensor for testing while we designed the house. I figured this would help me learn common uses for switches and sensors, and I could scale up when the time came. I also already had an LG TV, a Harmony Hub, and a Nest thermostat for more testing. The next 2 years focused on designing the house, and I continued to test OpenHAB and learn.
Beginner’s tip: Come to this forum, click “Latest”, and bookmark it. You will see some intimidating stuff happening, but you will learn, and some posts will peak your curiosity and you can search for more details.

We moved out of the house for what would end up being a 12 month project, and I continued to play with my switch, sensor, and TV in our rental. I also began planning the automation resources I would need. I had visions of a tablet above every light switch in every room (after discovering HABPanel), and using Homekit to talk to our house. I began picking hardware and building my list.

Tip: Take the time to make your project as big as you want. List your hardware and create a budget. The $ will tell you if you have gone too far.

I decided I would stay with hardware that had existing bindings:

GE/Jasco switches, dimmers, and ceiling fan switches
I had a Denon receiver in storage
I made sure my contractor was putting in a MyQ garage door opener
My solar contractor recommended Enphase inverters, so that was good
I made sure blinds and awning worked with Somfy MyLink
I bought new Samsung TVs

Tip: My contractor already budgeted Lutron light switches and dimmers, which can run up to $25 each. I found six packs of GE Z-Wave dimmers, add on switches, and switches on Amazon for a bit more, but was credited by my contractor for the Lutron switches, so my additional spend was not prohibitive.

Fast forward and we a back in the house. I will spare all the details of the build. It went as expected, and I stayed close to the network wiring and hardware installation. Needless to say I did not end up with tablets in every room (just one in the garage). I’ve read somewhere in this forum, “you should automate because you should, not because you can.” Very wise words.

Here is my main interface. Lots of details in each accordion, but we don’t use most of them that often. Living Room and Kitchen are used most often, so they are at the top. 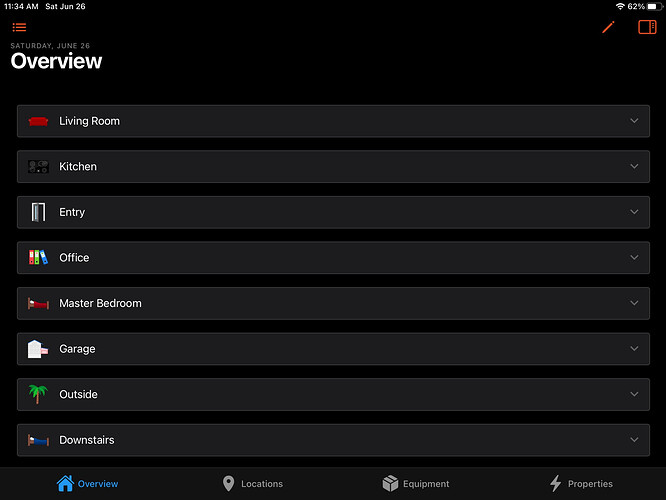 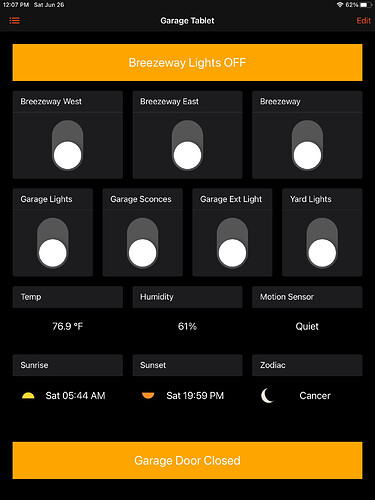 Other stuff I have done:

On the last point, I deliberately chose to stick to UI for everything, and have found I am not experienced enough to mess with scripts. I technically have one script in a rule, but it’s a one liner to send an email. Some rule making has been clunky without scripts, but I haven’t found a task I can’t complete in UI rules (yet).

That’s my story in abbreviated form.

Nice to see other peoples set up.
I am running on Ubuntu as well. My server does everything just like yours.
I migrated from OH2.5 and I to deliberately chose just to use the UI. Why try hacking files and introducing typos’ etc? I used to use files in OH2.5.
Since going to OH3 I have not used my sitemap. It is still there but the main UI does what I want and more.

I mainly use the overview page: 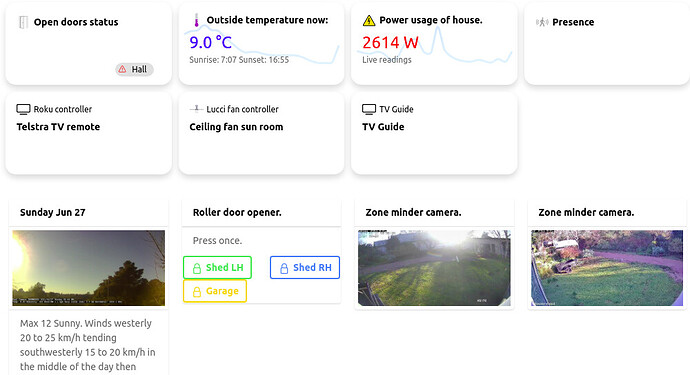 Agreed. I still have a sitemap, but only use it when I am outside my network on the OH app, which is rarely. To me, if you are using sitemaps on your own network, then you aren’t taking advantage of what OH3 UI can do for you. Plus, the developers put the work into OH3, as users we should use it (and spread the word and contribute to the foundation).

The oh app works with the ui. You must have an apple phone? I heard it isn’t an option. I could be wrong.
If you are on the phone the ui works well on a browser just as well as if you had the app.
I use mine via a VPN when I am out.

how did you achieve to get your camera live images into OH 3 UI?
Would you be so kind and share this solution to us?

They are not live feeds and only refresh manually. They are live if I click on the image and then it will run zoneminder.

The left hand weather picture is updated every minute via mqtt.

I do a time lapse of the weather so I generate a jpg image every minute and I send this image via MQTT to OH3 and display it in an oh-image-card. The image is displayed on my overview page and it refreshes every minute. I don’t convert to base64 as it “just works” Here is the mosquito code: mosquitto_pub -h 192.168.0.164 -t raw/weatherimage -f image.jpg [image] The image is about 92kb. Here is what it looks like in the item view: [image]