There is sadly no clear solution. In the last couple of months the 2.0 snapshot changed a lot and you could suffer under the changes by a few of these. Welcome to an active development community

I would suggest to start with a fresh installation and you should once go through the initial startup process and install your wanted bindings through Paper UI.
After that: If you want to rescue your configuration, my advice is to not restore all files blindly but to only replace the ones actually containing your configuration. Have a look inside these folders and I believe you will quickly find out which these actually are. (Stop-Start openHAB while you are replacing files!)

HELP: my raspi 3 seems to have crashed and does not boot anymore.
It stops with a Kernelpanic
it starts after
Begin: Running /scripts/init-bottom . . . done

I tried to access the sdcard with mac os but I only can mount the first partition: openhabian

what filesystem is used on the second partition?
Can I rescue the openhab configuration from that partition?

Or is there a way to reinstall openhabian without loosing the openhab configuration?

to my system resources.

Before you try any further, the first thing you should do is create a full image from the SD card.

If that’s successful work with this image to hopefully recover your data.The second partition is ext4, I can’t tell you how to access it on a Mac but that should be possible. If you gain access to the image/second partition, you will be able to backup everything from the folders listed here: http://docs.openhab.org/installation/linux.html#backup-and-restore

How can I upgrade to OpenHAB version 2.1.0 with openHABian?

Just wait? Use the update command in openHABian? Or with “sudo apt-get update/upgrade”?

I got it: With Knoppix 7.7 I could read and save my configs

Happy to hear that!
Next you should run a health test on your SD card. If you want to play safe, use a new one. Causes for a corrupted filesystem are mostly unexpected power loss and an aged sd card: http://hackaday.com/2016/08/03/single-board-revolution-preventing-flash-memory-corruption

On your next system you should use some backup solution. I am using github personally.
A backup solution will eventually (I can’t promise anything short-term) become a part of openHABian.

I just wanted to creat a sitemap via eclipsedesigner.
If I want to open the openHAB-conf (\OPENHABIANPI<file://OPENHABIANPI>) folder, appears:
„ the choosen directory is not a valid openHABconfiguration directory. Please chosse a different one.“
What shall I do?

In order to configure your openHAB setup, you will need a mounted network share to your configuration.

Thank you for your answer.
I ve got this network share. I connected my raspberyy pi with openhab:habopen and all my folders are shown. But if I want to open this folder in eclipse designer comes this error.

You need to mount it locally. Meaning the share \\openhabianpi\openHAB-conf needs to be mapped to a drive letter like F:\

Ah ok… I always opened it by network. Was this my mistake?

Yes. Like many other software applications, the Designer needs a local drive to work on. Do you think that’s not clear enough in the Links I’ve pasted above?

no it is clear, but my english skills arent so good, so i a just flew over the letters and the comands

What does this mean? 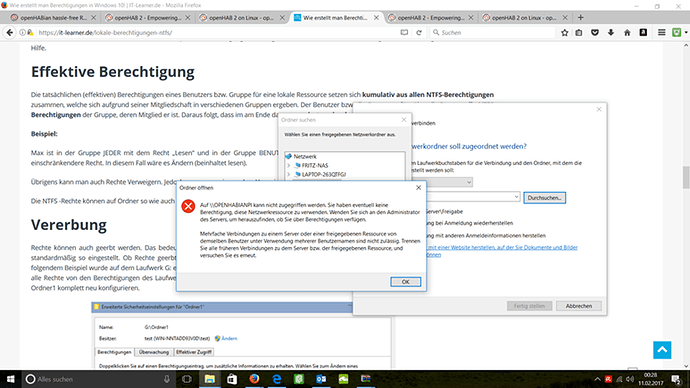 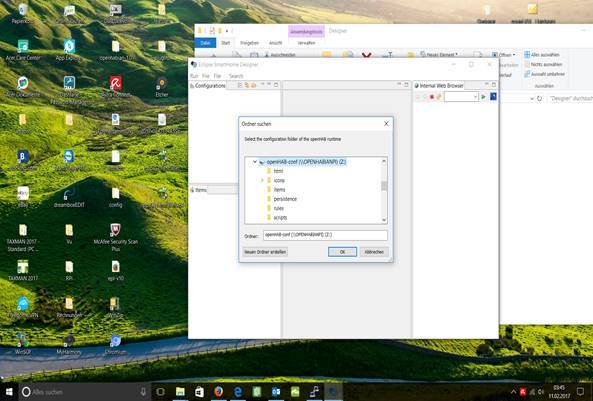 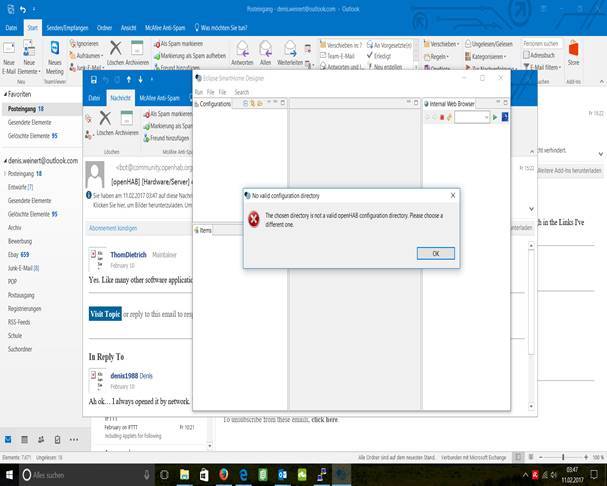 Is there any news regarding the pine image?
Any current experiences?

I remember that i have had similar problems when I played around with multiple sd-cards.

Did you really use the same card?
I tried a new setup based in the old image which I have put onto a new sd-card which was somehow problematic.

With the exact same sd card as earlier, the system was running fine.