I have been playing with openHAB for a few months now.
openHABian is installed on a RPi 3, connected via WiFi.

So far, everything seemed stable, I added all my personal belongings (Tradfri bulbs, shutters, Logitech Harmony, prescence detection etc …) and created many rules.

This morning, nothing lights up as usual, so,

What do you think the problem is, can we solve it, can we make a backup before possibly reinstalling everything?

I had the save behavior month ago. My SD card crashed. Did you moved the write excessive part to an USB stick?

Try to connect a monitor to the pi and see what the error message is.

Hi, thanks for your help

FAILED TO START DHCPCD ON ALL INTERFACES

i’m looking for answers in the forum

Everything I found with a little search refers to /etc/network/interfaces. Did you configured/changed anything before the crash?

PS That error is not openHAB specific but raspberry pi specific. Maybe you can search there for a solution too.

hey same conclusion for me…pi problem,
to answer you i changed nothing before the crash

Hmm. The cause sounds legit. But why did your DHCP server start up suddenly?

so, i tried the method describe below, i’v no more error on reboot, but still no access via putty

Not enabled, actually running? Enabled just means that it is supposed to start when the system starts. Running means it’s actually actively running. The fact that your ssh attempts are timing out implies that the daemon is not running.

Notice where it says Active: (running). If it says anything else sshd is not running.

This is my ssh that is port forwarded so you can see how anything that is exposed to the Internet is under constant attack with the log statements below the header info. I need to re-enable fail2ban on this machine.

i try ton enable it via
…

It definitely looks like your sshd is either gone or pretty broken. You can reinstall it but one has to ask why/how it became in this state. One thing to note is pulling the power on a machine that happens to be writing to any sort of flash memory can cause widespread corruption of files, including files that are not actively being written. That could be the case here, but I doubt it. This looks like sshd was uninstalled.

it seems to work, then i checked the status of sshd service as you said and now is ACTIVE 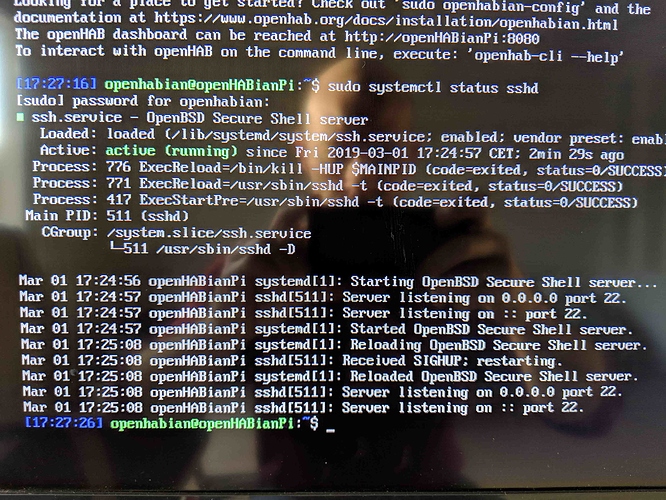 See if you can ssh on the openHABian machine itself to itself.

i’m not sure to understand what you mean

Were you using DHCP to get an IP address? If so, you need dhcpcd.

If you’ve disabled dhcpcd you won’t get an IP address and won’t be able to connect.

Check to see what your IP address is. Run “ip address” and look for the wlan block, and find the inet address. If it starts with 169.254 then you don’t have a valid IP, and the dhcpcd needs to work.

dhcpd is the DHCP server that hands out IP addresses to other hosts. You likely don’t need it.

dhcpcd is the DHCP Client Daemon which gets you an IP address from your DHCP server. You probably need it.

Try systemctl start dhcpcd and then journalctl -u dhcpcd.service to see what errors are happening. Once you get that sorted you should have a workable IP address again.

If you’ve assigned a fixed IP address on the host, all this isn’t helping, and I don’t know why you can’t ssh to your host.

Having the exact same issue. Came out of nowhere
Tried to start dhcpcd service but get the following 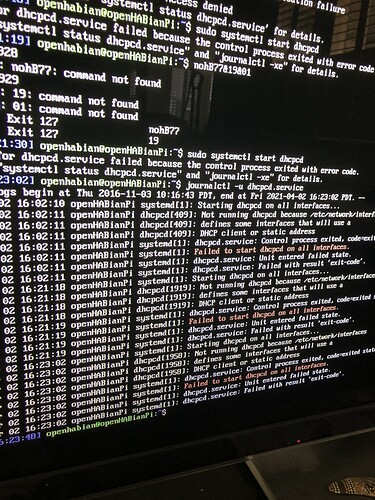